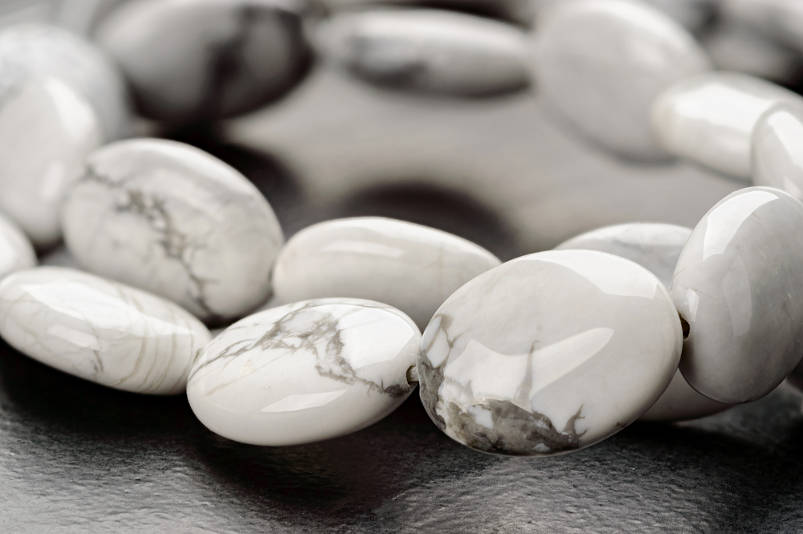 Howlite is a stone that doesn’t get much attention. It’s often treated simply as a base for making imitations of other, more expensive gems (especially turquoise). Still, despite its abundance and low price, this is a stone with a well-deserved reputation in crystal healing and magical circles.

Howlite is a calcium borosilicate hydroxide. It’s found in deposits of water-soluble sedimentary minerals. It most often forms lumpy nodules, though it can occasionally produce crystals. As nodules, howlite is typically white with veins of black or grey. As crystals, it is brown, white, or clear, and translucent to transparent.

Like cobalt and pyrite, howlite first received worldwide attention as a nuisance mineral. Henry How, a geologist and chemist, was alerted to the presence of the mineral in a Canadian gypsum mine. He originally named it silico-boro-calcite, but it was later renamed to Howlite.

Howlite has some very gentle, but unsubtle, emotional healing energy. It’s said to help bolster confidence and balance moods, evening out those who tend to get hot-headed. This balancing property also makes it useful for those who have trouble dealing with life’s ups and downs, as it allows them to take a moment to breathe and respond, rather than instinctively react.

Similarly, it’s also useful for those who end up kept awake by their own thoughts. It’s excellent for turning down mental “noise,” offering some respite for healing and rest.

This stone is also used for grief and mourning. It helps the user stay strong while they heal their emotions, and provides a steady grounding energy during times of crisis.

Most of howlite’s healing properties are purely emotional. Some sources claim that it can help the physical body by aiding calcium absorption and assimilation.

Since howlite was only widely studied after the late 19th century, it didn’t make its way into old grimoires and resources on traditional magic. Nonetheless, it’s used widely today.

Howlite is useful for past life regressions. Since it helps calm the noise of the conscious mind, it’s a tool for all kinds of work that involves delving deeply into the mind — whether for healing or learning. This also makes it useful for astral projection and journeying between worlds.

Since it can help calm the mind and keep racing thoughts at bay, it’s a good stone to use for dream work. Pair it with a stone that enhances psychic abilities, like amethyst, and one for dream recall, like Herkimer diamond, and place it either under a pillow, or on a night stand before going to sleep.

Some who work with howlite say that it seems to pull negativity — whether energetic or emotional — into itself. This may be part of its power as a protective and healing stone, but also means that it must be cleansed well and often.

As a white stone, howlite resonates with white color magic. This is the color that governs cleansing, protection, and spirituality — all things which tie in to howlite’s use in modern magic.

For those who work with chakras, this stone is said to possess a unique ability: the power to open the root and crown chakra simultaneously. People generally have both of these energy centers active and drawing energy during deep meditation, but howlite manages to produce the same effect just by handling the stone and tapping into its energy.

The root chakra, Muladhara, is tied to the physical body and our sense of survival. When it’s blocked, we can feel anxious and afraid. It’s also the first energetic gateway to the other chakras — if it doesn’t work properly, nothing else can, either.

The crown chakra, Sahasrara, is tied to the spiritual realm. When it’s blocked, we can feel isolated and spiritually lost. Wearing or meditating with howlite is believed to help open these centers.

How to Cleanse Howlite

Howlite is a very soft mineral (only about a 3.5 Mohs scale hardness), so it’s important to be gentle while cleansing it. Since it’s usually used for calming intense emotions, healing during grief, and protection, it also needs to be cleansed fairly often.

Some methods for cleansing Howlite include:

Howlite’s softness means that it scratches very easily. Avoid putting it in salt, burying it in soil, or cleansing it with harder crystals. These methods may accidentally scratch the stone.

Since this stone takes dye so readily, you might also want to avoid washing it in infusions of herbs. While this is an effective cleansing method, it many discolor the stone.

Getting Started With Howlite

This mineral is a really nice one to start with. It’s energy can feel a little strange at first, since it appears to “pull” negative emotions out of the user and has a profound effect on the energetic body. With time, it can be a really delightful, useful stone.

The biggest trouble with howlite is how often it’s used to fake other stones. That isn’t generally a problem for people seeking to buy howlite itself — in fact, many people find that they’ve bought it accidentally! Still, it’s good to know how to tell genuine howlite apart from other minerals.

Dyed howlite is often sold as lapis lazuli, red coral, or turquoise. Sometimes, it might be called “turquenite” to distinguish it from genuine turquoise, but it’s still howlite. Natural howlite may also be marketed as “white turquoise” or “white buffalo turquoise.” White turquoise does exist, but it’s rare and generally expensive.

When it comes to telling howlite and white turquoise apart, the easiest way is by its shininess. Turquoise is harder and can hold a shine better. Howlite, even when polished, will always have a slightly “chalky” appearance.

Failing that, a scratch test can show how the stone’s hardness compares to a known mineral. Turquoise is about a 5-6 on the Mohs scale, while howlite is only a 3.5. A piece of fluorite, for example, would be able to scratch howlite and be scratched by genuine turquoise.

Once you have your howlite at home, it’s important to cleanse it thoroughly. It has passed through many hands on its way to you, and possibly picked up bits of energy along the way. This means that you need to return it to its natural energetic state before you begin to use it.

After cleansing, you may use your howlite however you choose. If it’s intended to be a healing stone, try carrying or wearing it near your heart or head. If you want to use it for past life regressions or astral travel, try meditating while holding it in your non-dominant hand. For protection, keep it as a pocket stone.

Gypsum miners may not have seen the value of howlite, and crystal suppliers may chiefly regard it as an imitation stone, but they both overlook howlite’s magical and healing properties.

With time and a little bit of effort, this stone can become a wonderful tool for witches and energy workers alike.