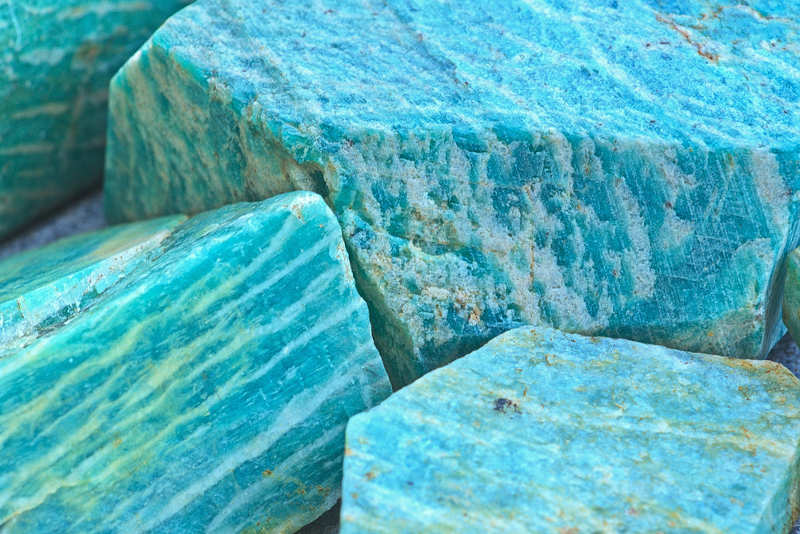 If you’ve ever seen amazonite, you know it’s a stone you won’t soon forget. With it’s bright verdigris blue-green color, often adorned with streaks of silvery white and cream, it gives a very unique appearance to jewelry. Don’t be fooled by it, however — as pretty as it is to look at, it’s true beauty runs much deeper.

Amazonite is kind of a catchall term for green to greenish-blue varieties of triclinic potassium feldspar. In most cases, green or blue-green stones come from the inclusion of copper somewhere in their crystal structure.

In amazonite’s case, its color actually most likely comes from lead. Iron, thallium, and rubidium may also play a part. It’s possible that amazonite’s striking color is due a combination of molecular and environmental factors that can vary from stone to stone.

Interestingly, though it’s named for the Amazon River, that’s not where most of the world’s amazonite comes from. Seekers found green stones in the river, but these likely weren’t actual amazonite.

It helps provide perspective, connects the logical and intuitive minds, and allows the user to adopt a flexible approach to their problem. Among some healers, amazonite is considered “the stone of hope” for its ability to foster an optimistic mindset.

Physically, this stone is used for problems related to calcium, including dental issues, osteoporosis, broken bones, and electrolyte imbalances.

It’s also used to help boost health in a general way, since it acts as a kind of energy filter. Some people use it to combat the effects of electromagnetic frequencies in their environment.

Amazonite is said to increase feelings of courage, which make it an ideal stone for using as a charm for bravery. Wearing it as jewelry, keeping it in a pocket, or placing it in a pouch with other stones and herbs for strength and courage can help the user endure difficult situations.

This stone is also said to enhance the user’s desire for a spiritual connection. It can be a useful charm for those setting out on a spiritual path, to help keep them from feeling frustrated during the learning and growth process.

It also helps balance the receptive and projective or active and passive energies within the heart and mind, which can help smooth out the user’s spiritual path.

Like aventurine, it can serve as a luck charm. It’s said to help draw in success and wealth, and is a popular choice for gamblers seeking to have a long lucky streak.

As a green to blue-green stone, amazonite is tied to both blue and green color magic depending on its hue. The color blue is tied to truth, healing, and peace, while green is associated with fertility, plants, growth, and beauty.

Since it sits right between blue and green, this stone is also associated with two chakras — the throat chakra, Visuddha, and the heart chakra, Anahata.

Wearing this stone as a pendant near the throat is said to help open and balance Visuddha, while wearing it on a longer chain, near the heart, is said to aid Anahata.

Amazonite was named by Johann Friedrich August Breithaupt in 1847. He chose this name for the unidentified green stones found near the Amazon River.

Amazonite is said to be tied to the ancient Amazons, a tribe of warrior women who set amazonite stones in their shields and armor. Though their existence is debated, the amazonite stone is still strongly associated with powerful feminine energy.

This stone was engraved with the seventh chapter of “The Judgment of Osiris,” the Egyptian Book of the Dead. It’s also one of the stones allegedly in Tutankhamen’s gold death mask, and the breastplate of Moses.

How to Cleanse Amazonite

According to some users, the best way to cleanse and refresh amazonite is to bathe it with an infusion of mint leaves in water. There are multiple other ways to re-calibrate the energy of an amazonite stone.

Some methods for cleansing Amazonite include:

Since amazonite isn’t a single type of stone, and its greenish-blue color can come from a variety of sources, it should be cleansed in sunlight with caution.

Some stones marketed as amazonite will fade to a light gray, while others may deepen to a darker blue-green. Unless you know how your amazonite will behave upon exposure to sunlight, avoid sun cleansing for more than a few minutes at a time.

Getting Started With Amazonite

Since it only comes from a few areas of the world, amazonite is sometimes difficult to find. If you manage to track it down, treasure it — it’s a very special stone!

The easiest way to get started using amazonite is to regard it as a calming protective talisman. It’s best used as jewelry or a pocket stone. Keeping it close will allow it to add its energy to your aura field, filtering out unwanted energetic frequencies, protecting you from negativity, and serving as a tangible reminder to keep cool and go with the flow.

It’s said that those born under the sign of Virgo benefit the most from amazonite’s energy, as they tend to overwork themselves, struggle with perfectionism, and experience intense self-doubt.

This stone can do wonders for combating those feelings. That said, amazonite isn’t only for Virgos — if you tend to be hard on yourself, this stone can help give you the perspective you need to relax.

Amazonite is a wonderful stone for finding an island of calm in an ocean of chaos. Just as water seeks its own level, amazonite is also great for helping you to achieve balance, no matter whether that’s balancing your emotions, your logical and intuitive mindsets, or your electrolytes.

If you are ever in need of the cool, soothing energy embodied by the element of water, amazonite is a very valuable healing and magical tool.