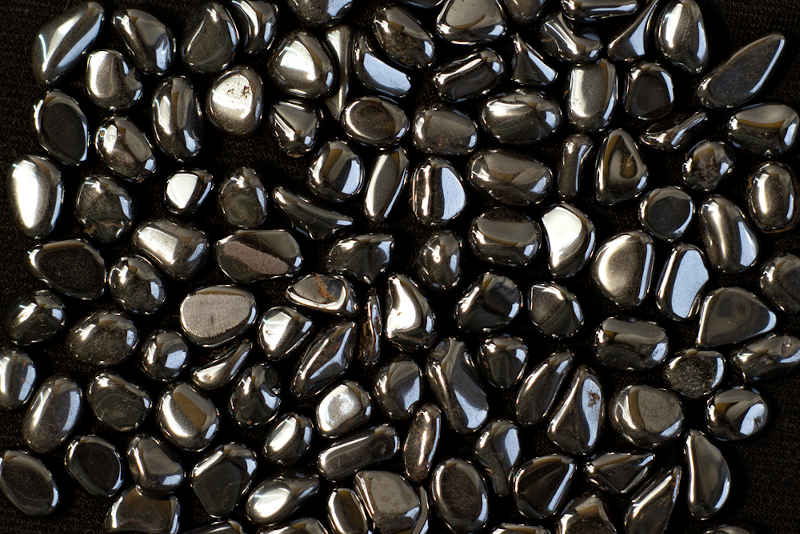 Hematite is one of the most easily-recognized stones, even by novices. With its dark, shiny, metallic surface and considerable heft, it’s hard to miss. This stone is a common subject for jewelry and carvings, to the point where it’s often faked. For crystal healers and magical practitioners, however, only the genuine article will do.

Hematite is a form of iron oxide. It’s very abundant, and can be found on its own or as inclusions in other stones. Commercially, it’s a very important ore of iron.

Tumbled specimens of this stone are usually a uniform gray-black color with a shiny, metallic appearance. It can also be dull to bright red, or even appear as fine particles as a result of weathering of larger specimens.

Hematite should not be confused with hematine. Hematine is a man-made stone sometimes sold as hemalike, or magnetic hematite. While natural hematite is only weakly magnetic, hematine is used to make magnetic jewelry.

While hematine resembles natural hematite, some specimens are made of completely different ferrites and contain no actual hematite.

As an emotional healer, hematite is a wonderfully calming, strengthening stone. It’s believed to impart courage and confidence to the user through its grounding action, rooting them to the “here and now” and keeping them from catastrophizing. This stone is also said to help with focus, attentiveness, and general feelings of stability.

Physically, hematite is used to enrich the blood and regulate circulation. It’s also said to assist the kidneys and speed tissue regeneration. Crystal healers consider this stone very useful for treating anemia, high blood pressure, or clotting issues. Some also use it to promote good posture and spinal alignment, insomnia, and muscle cramps.

Hematite is used as a grounding and strengthening stone in magic, as well as crystal healing. Grounding is one of the most important skills for a practitioner to master — it allows them to return to their natural energetic state after rituals or spellwork, and connects the energy of a spell to the physical plane, where results happen.

This stone is also used for protection. Historically, it was also a talisman for battles — said to help heal wounds and make warriors fight more courageously. It’s definitely a good choice for a protective charm for all forms of danger. Hematite’s mirrorlike finish works as a kind of sympathetic magic here, deflecting harm and negative energy directed toward the user.

Some also consider it a helpful tool for dissolving negative energy and promoting calm, peace, and tranquility. While even a small hematite stone is powerful, larger specimens are more suitable for cleansing and calming a room. Put a big hematite in a living room, den, or other common area of the home.

While hematite may not have amethyst’s reputation as a stone for diviners, it has its own skill. Hematite’s metallic nature can help the user metaphorically “cut right to the heart” of a problem or question. It’s a good stone to make rune sets, pendulums, and other tools from, or simply to keep with tarot or Lenormand cards.

For those who work with chakras, this stone is strongly associated with the root chakra, Muladhara. The root chakra is very physical. It governs survival, self-sufficiency, and safety. When it’s blocked or unbalanced, problems can show up in the form of fear and a fight-or-flight response.

Since the root chakra is the gateway that energy must pass through before it can go any higher, issues with a blocked root chakra can also cause all kinds of problems within the energy body. Wearing or meditating with hematite near this area is said to help open and clear this vital energy center.

Hematite is derived from the Greek word “haimatites lithos,” meaning “bloodlike stone.” In fact, many old references to bloodstone actually refer to hematite. This can be confusing when reading old grimoires, folklore, or medical writings.

This stone was used since prehistory to produce a red pigment. This was used for art and as a protective war paint. Some cave paintings are rendered in hematite pigment.

Ancient Greek and Roman warriors carried and wore hematite in order to help them stay courageous in battle.

In Egypt, hematite was used to calm inflammation. In Mesopotamia, it was believed to help cool the blood. Hematite is generally very cold to the touch, which makes it useful for conditions that benefit from cold.

How to Cleanse Hematite

Hematite is fairly hard — roughly 5.5-6.5 on the Mohs hardness scale — and durable. Unfortunately, it’s one of the stones that doesn’t particularly like getting wet. As an iron oxide, it can leach iron into water. Prolonged immersion can also cause it to rust. Instead, try one of the following cleansing methods.

Some methods for cleansing Hematite include:

As a very grounding stone, hematite has an affinity for “earthy” cleansing methods. If you do choose to re-align its energy using a plant, potting soil, or the Earth itself, be sure to place it in an area where it won’t be exposed to water for prolonged periods of time.

Getting Started With Hematite

Hematite is inexpensive and easy to find in metaphysical and crystal shops. As with any crystal, it’s important to find a specimen that’s been ethically harvested. It’s also helpful to know how to tell the difference between natural hematite, and imitation hematite, or hematine.

As was mentioned above, hematine is a magnetic ferrite often sold as “hematite” jewelry or carvings. This material is made with a resin binder, which makes it more stable and easier to work with for craftspeople.

The easiest way to tell it apart from genuine hematite is its magnetism — if a dish of rings all cling together, they’re hematine. Hematite is only weakly magnetic, so it may be drawn to a strong magnet, but will not draw metallic objects to itself.

There’s also the streak test. A streak test is a way to differentiate between very similar minerals. It involves taking a specimen and scraping it gently on an unglazed ceramic plate, just enough to produce a single streak of color.

Since not all hematine is magnetic, this can help you figure out what mineral you have in your possession. Genuine hematite produces a rusty red streak. Some hematine may make a gray or white streak.

When choosing a hematite specimen, be sure to hold it in your non-dominant hand. This will give you an idea of how its energy feels. The non-dominant hand is sometimes called the “receptive” hand, and is generally better at picking up on subtle energies. As long as a stone feels pleasant to you, and doesn’t make you uncomfortable, it’s suitable for working with.

Once you have a piece of genuine hematite, you may wish to cleanse it. A stone’s natural energy can be altered by the mining (or manufacturing) process, shipping, and being touched by people in a shop. Cleansing helps remove these influences and get the hematite back to its baseline.

After cleansing, your hematite is ready for use. You can try asking it for its protection, and carrying it with you. If you need emotional healing, place it in a pouch and keep it near you for those times when you need its stabilizing energy. Determine what purpose you’d like your hematite to fulfill, and put it towards that.

Hematite is a beautiful stone with a dark, mysterious shine. It looks almost like a black mirror when polished, and has drawn people to its strange beauty for ages. Even today, it continues to be an important source of iron.

Work with your hematite regularly, and it will be a useful tool for a lifetime.