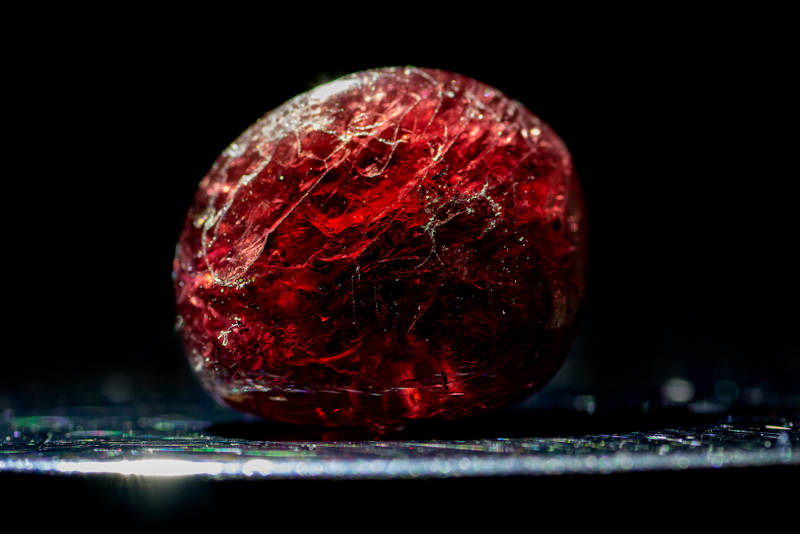 While most people think of faceted deep red gemstones when they hear the word “garnet,” it’s really a catchall term for several different types of minerals. Some can be that familiar wine red, while others may be brown or even bright green.

Members of this group of stones have been used since the Bronze age for tools, adornment, and their magical properties.

Garnets are silicate minerals, with colors that vary depending on the inclusion of other elements. All of them have a Mohs scale hardness of 6.5-7.5, hence their use as abrasive material.

There are multiple different subtypes of this stone.

Emotionally, garnets are used to impart strength and provide an uplifting feeling. Some healers use them to alleviate symptoms of depression, keep nightmares at bay, and help the user develop courage in the face of adversity.

According to some sources, it’s particularly helpful for widows — it provides strength during the mourning period, and helps the user become in touch with their sexual needs afterward. For this reason, it’s sometimes used to help those who have lost someone in the past find another partner.

In general, garnets are believed to rid the body of toxic material and encourage blood to clot. Red garnets are stones of vitality and strength, which are said to improve circulation, increase energy, boost the absorption of nutrients, purify the blood, and improve some endocrine disorders — including acne and low libido.

When worn, garnet acts as a shield against negative energy and psychic vampirism. It also helps guard against theft, and is purported to send negative energy back to its source. Historically, it was used to adorn weaponry and armor — both as a protective mechanism, and to increase the user’s courage in battle.

This stone is helpful in dream magic. Placing one under a pillow is said to keep nightmares away, which can be useful during the pursuit of lucid or prophetic dreaming. Couple it with amethyst, moonstone, Herkimer diamond, or other stones to aid psychic abilities, lucidity, and dream recall.

These crystals are also used to attract business. Square-cut garnets are said to be best for this. When placed on a desk, cash register, work station, or other place of business, they draw in customers and money.

Garnet is also considered to be a generally lucky stone.

For those who work with chakras, garnet is said to stimulate all of them — from the root to the crown. Certain colors of garnet can also exert a particularly strong effect on their corresponding chakra.

Red garnets are best for Muladhara, the root chakra. Orange are for Svadhisthana, the sacral chakra. Yellow are for Manipura, the solar plexus chakra. Green are best for Anahata, the heart chakra.

Garnet has been considered a valuable gemstone since antiquity. There are several beautiful pieces of ancient jewelry and weaponry adorned with garnets. The earliest recorded use of garnet dates back as far as 3000 BCE, and pieces of garnet jewelry from roughly 2000 BCE have been found in Scandinavia.

During the middle ages, people believed that garnets would protect the wearer from poison. Garnets were also thought to turn dark or pale in the presence of danger.

Garnet cloisonné was a particularly popular artform that spanned almost all of Europe. In this method, pieces of garnet were inlaid in gold. Garnets also adorned the clothing of many royal houses, including the Russian Tsars and Tsarinas, Mary, Queen of Scots, and Queen Victoria.

During the 1890’s rebellion in Kashmir, India, Hanza soldiers used garnets as ammunition to fire on the British army.

The name “garnet” is derived from the Latin “granatus,” referring to the pomegranate. Red garnets resemble the fruit’s juicy arils.

How to Cleanse Garnet

Garnet is a pretty hard, durable stone, so it can tolerate a range of cleansing methods.

Some methods for cleansing Garnet include:

Out of all of these methods, garnet is said to favor moonlight the most. Choose a night when the moon is full and there are no clouds. Set the stone either in a safe place outdoors, or in a window. Be sure to remove it before dawn.

Getting Started With Garnet

Garnet is a fairly abundant stone, so it’s easy to find as anything from rough specimens, to tumbled stones, to jewelry. All of these will work for magical or healing purposes, so the choice is entirely up to you.

Whatever garnet you choose, be sure it comes from a reputable supplier. Some miners harvest their stones using methods that are exploitative or environmentally unsustainable. A good seller should be able to offer information about where their products were mined, and whether this was done using ethical methods.

To choose your stone, hold it in your non-dominant hand. This is sometimes called the “receptive” hand, and tends to be better at receiving energy (in contrast to the dominant, or “projective” hand). You may feel a subtle tingling, pulsing, or buzzing.

These are generally positive signs. Avoid stones that are uncomfortable, painful, or which make you feel strangely sad or angry. If you don’t feel anything, that’s perfectly okay too. Choose the stone you’re drawn to. As long as it doesn’t feel unpleasant to hold, it’ll be a suitable tool for you.

When you have your garnet, take it home and cleanse it according to the method you feel is best. This will help prepare it for use as a healing or magical tool.

After your garnet is cleansed, you’re all set. You can use it however you like. You can use jewelry as a courage, attraction, or protective talisman. Meditating with garnet placed on your heart area is thought to help detoxify blood and heal the heart and the lungs. (Avoid this if you have atrial hypertension, as garnets can worsen it.) Putting small garnets in a pouch with herbs is a wonderful way to make a charm bag for all kinds of purposes, from love drawing, to protection, to courage.

There’s a reason why kings and warriors of old turned to garnet as a decoration and magical talisman. These crystals are as powerful as they are beautiful. If you have a garnet specimen in your collection, treasure it.