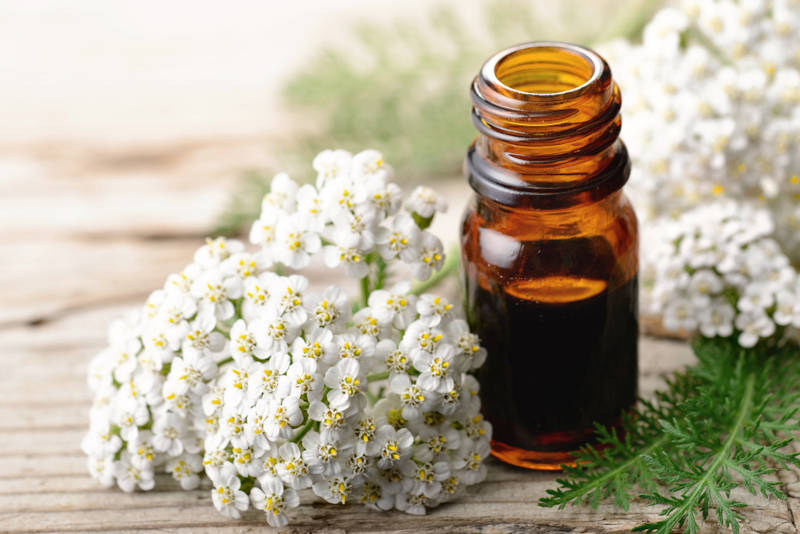 Believe it or not, yarrow (Achillea species, especially millefolium) is probably most familiar as a ditch weed.

Native to temperate areas of Asia, Europe, and North America, this tough perennial grows abundantly pretty much anywhere where it can put roots down — roadsides, coasts, and undisturbed meadows.

Keep an eye out from late spring to early autumn, and you’ll likely spot loads of these tiny white flowers.

Yarrow is used in divination. One method of casting the I Ching involves counting yarrow stalks. When added to dream pillows and sachets, this herb encourages prophetic dreams.

This plant also has a strong reputation as a purifier. Scattering it in a doorway keeps evil from crossing. Misting one’s energy field with an infusion or hydrosol of yarrow acts as a general cleanser and protector.

This can be very useful for diviners, healthcare workers, social workers, and others who work closely with people who may be experiencing negative circumstances.

Yarrow is also used as a love herb. Hung above a marriage bed, it’s believed to keep two lovers together for seven years.

Yarrow leaves are also used for love divination — the curious party would tickle the inside of their nose with a single leaf, while saying, “Yarroway, yarroway, bear a white blow. If my love love me, my nose will bleed now. If my love doesn’t love me, it won’t bleed a drop. If my love do love me, ’twill bleed every drop.”

Yarrow is ruled by Venus and the element of water.

Yarrow used to be used as a blood clotter on the battlefield. For this reason, it was once named bloodwort, herba militaris, and staunchwort. The name Achillea comes from Achilles, a Greek warrior.

In some areas of Scotland, holding a leaf against one’s eyes was believed to grant the second sight.

Yarrow may also help the brain. Two varieties of yarrow, Achillea umbelata and A. wilhemsii both demonstrated an interesting effect against anxiety. This appeared to rely on a different mechanism than popular anti-anxiety medications like benzodiazepines.

In a 2017, researchers found that yarrow improved a variety of neurological conditions, including Alzheimer’s, Parkinson’s, stroke, multiple sclerosis, and epilepsy.

Yarrow is a traditional herbal dye. It produces a green to greenish yellow color.

Possible Risks & Side Effects of Yarrow

It’s possible to be allergic to yarrow. If you’re allergic to chrysanthemums, ragweed, marigolds, or daisies, you may cross-react with yarrow.

Allergic reactions can vary, and may encompass anything from mild rashes, to stomach upset, to anaphylaxis. If you are allergic to any species of yarrow or any of its potential cross-reactants, please substitute a different herb.

This herb can affect how your body processes certain medications. If you’re on lithium, talk to your doctor before using yarrow. If you’re on painkillers, medications to treat depression or anxiety, or antihistamines, yarrow may make you extra drowsy. Don’t drive or operate heavy machinery until you know how it’ll affect you.

Yarrow is not safe to use during pregnancy. It can act as a uterine stimulant, which may increase the risk of miscarriage. It’s not known if yarrow is safe for use while breastfeeding.

Infusions and hydrosols of yarrow are often used as gentle skin astringents and treatments for acne, eczema, and other minor dermatological complaints.

While yarrow is generally considered safe for otherwise healthy people, be very careful if you choose to wildcraft this herb.

While its feathery foliage and clusters of tiny white flowers make it stand out in a meadow, the same is true for two poisonous lookalikes: Spotted water hemlock (Cicuta maculata), poison hemlock (Conium maculatum), and cow parsnip (Heracleum maximum).

Both poison hemlock and spotted water hemlock are extremely toxic, and cow parsnip can cause blistering just from touching it. Please don’t attempt to wildcraft yarrow until you have sufficient experience identifying it and distinguishing it from potentially deadly impostors.

Yarrow is named for Achilles because it is believed that he carried the herb on the battlefield to treat wounds. Chiron, a centaur healer, taught him to use this plant to stop bleeding and treat injuries.

In some parts of Asia, it’s believed that wild beasts and poisonous plants won’t live where yarrow grows. Yarrow is also considered lucky.

Part of yarrow’s reputation as a love herb may come from the way it grows. It can take years for a yarrow plant to become established, but, once it is, it will last through thick and thin.

When used as a companion plant, yarrow helps increase the essential oil content of herbs, and improve overall garden health.

Getting Started With Yarrow

This plant can take awhile to grow from seed, but, if you can get plant starts instead, it’s an ideal addition to a green witch’s garden.

When starting from seed, use moist, regular potting soil and sow seeds indoors six weeks to two months before your last frost.

When your plants are ready, plant them 12-24″ apart, in an area with full sun. You won’t need to do much after that — just water it during droughts and keep an eye out for spittlebugs and fungal infections. Other than that, yarrow is remarkably hardy and fairly disease-resistant.

When your yarrow flowers, harvest the plant and hang inside of a paper bag to dry. Yarrow flowers are usually used for medicine — especially blood clotting — but you can still use the stalks and leaves for magical purposes.

The easiest way to get started working with yarrow is as a divination and purification herb. You can either purchase a bottle of yarrow hydrosol, or brew your own yarrow tea from scratch.

As it steeps, stir it with a spoon held in your dominant hand, and ask the herb for its help. Allow the tea to cool, strain out the plant matter, and funnel the liquid into a spray bottle.

Before crystal scrying, tarot reading, or other divination, lightly mist yourself — especially your hands.

Kept refrigerated, the tea will last up to a week. Discard if it begins to look cloudy or smell off.

Yarrow’s an amazing little plant. It’s one of the reasons why Achilles was so prodigious in battle, a tool for Chinese diviners, and a charm for lovelorn teenagers.

If you have a spot in your yard with plenty of sun, these bright umbrellas of tiny white flowers could be a perfect addition.