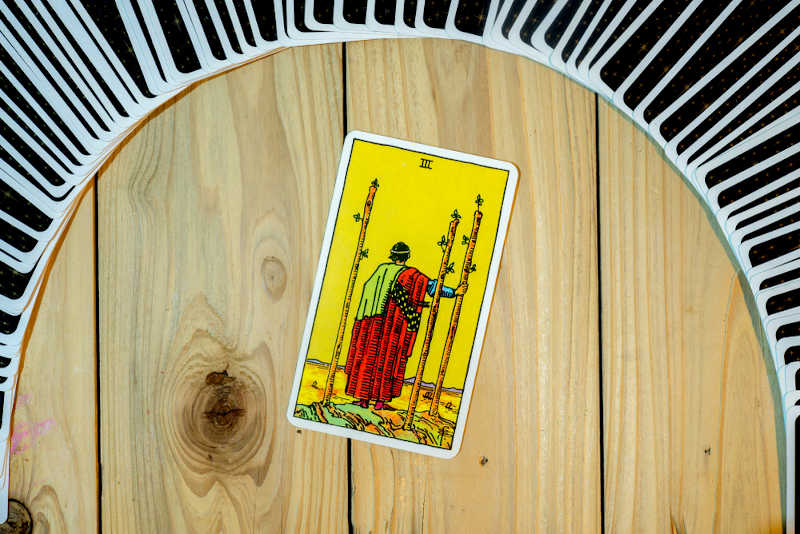 In the Minor Arcana, threes have a special meaning. Every suit begins with an Ace, which represents the beginning of a cycle. Two comes next, which symbolizes coming together, planning, and putting the energy of the Ace into action. Threes come after that, and depict the plan starting to get results.

Two elements have come together to yield a third. They’re emblematic of a unifying force, and when the action moves from the planning stage and into the beginnings of realization. The Three of Wands is no different.

About Three of Wands

In the Rider-Waite-Smith tarot, Pamela Colman Smith portrayed the Three of Wands as a robed figure calmly looking out to sea. They have their right hand on one wand (really more of a staff), while two others sit planted in the ground around them. In the distance, some ships sail across a smooth ocean.

The figure themselves appears to be well-dressed. They have a simple gold circlet on their head, and are wearing a red cloak and green mantle. Some kind of sash — possibly woven from leaves or flowers — sits across their body.

Though the viewer can’t see their expression, the figure’s posture and overall demeanor seem to be calm. It’s even possible to read them as eager or optimistic as they watch the ships.

The sky is a soft golden color, reflected in the hue of the sea. This could represent sunset, or (more likely) dawn. While this card doesn’t have the same “new beginnings” energy as the Ace does, it can indicate a fresh start.

It’s also sometimes taken to symbolize achievement. The time of day, therefore, indicates either the beginning of an exciting new time, or the height of success.

In general, this card represents travel, freedom, and adventure. It can also stand for planning for the future, and putting those plans into action. Some view the figure in the card as a merchant, watching his ships with excitement and knowing the riches they’ll bring back to him.

When it appears, you’re in a very strong position to take control of your destiny. The suit of Wands deals with creativity, so it may take some imagination, but success is well within your reach.

It will likely require travel, but this can be metaphorical — rather than going anywhere, you may be asked to broaden your horizons. No matter the case, remember: Fortune favors the bold.

When reversed, the Three of Wands represents returning. Rather than embarking on an adventure, you’re going home. This usually isn’t viewed in a positive light — your return may not be the triumph you’d hoped it would be.

Sometimes, this is from a lack of foresight and proper planning. The Three of Wands appears here to remind you that you have the ability to try again. You can always make a new start; you just need to have all of your ducks in a row first. Don’t let this apparent failure stop you.

In a love and relationship context, the Three of Wands can represent a long-distance relationship, vacation romance, or other love affair that requires travel. It can also represent moving toward the next milestone in your existing relationship.

You may be making steps toward an engagement, moving in together, or starting a family. Don’t simply allow this to happen for you — these are all major steps that require planning in order to make sure they go smoothly.

If you’re single, then the Three of Wands can urge you to enjoy your freedom to travel, see new sights, and go on adventures. You’re at a point where you don’t have to answer to anyone else. Live it up while you can, and you may meet your future lover on your journey.

In its reversed orientation, the Three of Wands is generally a negative omen for love and relationships. This can range from a lack of progress in your existing partnership, to a long-distance relationship that fizzles out. You may have to move back home after a breakup.

In some contexts, your relationship may be struggling to move past the initial stage. You might have trouble committing or getting your partner to commit. You may also feel that your partner is holding you back from experiencing your freedom or realizing your full potential.

If you’re single, the Three of Wands can indicate that something is holding you back. You might be hoping for a reconciliation with an ex-lover, which is keeping you from fully enjoying your newfound freedom. Be careful here — these feelings can also keep you from moving on with a new partner.

In general readings, the Three of Wands is often viewed as relating to money, commerce, and business. In a specifically career-oriented reading, it’s a positive omen tied to travel, expansion, and success.

You’re likely to receive a lot of new opportunities in the near future, especially related to overseas business trips or learning experiences that help broaden your horizons.

Financially, the Three of Wands is a positive omen. You likely have plenty of money coming in, and this card is urging you to invest some of it in new experiences. Go on a trip, take a vacation, or sign up for a cooking, dance, or language course. Do something to experience a new culture or perspective.

When reversed in a career and business reading, the Three of Wands is all about frustration, stagnation, and even backsliding. If you have travel or expansion plans, they may be delayed or cancelled.

You probably feel very frustrated, and as if opportunities are passing you by. Take inventory here — are you simply not being offered the same opportunities as other people, or are you turning them down out of fear?

When it comes to money, the Three of Wands hints that things are less organized than they should be. You might be having trouble keeping track of your income and expenses, and it’s thrown things into a state of chaos.

It’s time to start keeping receipts, checking your balance regularly, and getting a handle on where your money goes. This situation won’t sort itself out; you need to take charge of it before it’s too late.

Three of Wands: Yes or No?

In a simple “Yes or No” reading, a Three of Wands is a “Yes.” This is a card about possibilities, looking outward, and a limitless horizon. You’re in a very exciting, positive, optimistic place right now, so your desired outcome is very likely.

When reversed, the Three of Wands becomes a “Probably not.” It should be noted that this isn’t the same as a “No” — this card warns you that you won’t receive your desired outcome without some changes on your part.

You may be falling victim to some limiting beliefs, which are constraining your ability to take charge of your destiny. When you can dismantle these, things will change for you.

The Three of Wands upright is a very positive card. It’s all about new experiences, excitement, and adventure. Even if you don’t travel to a foreign land, you still have the opportunity to learn and expand your mind. Take advantage of it. It’ll only do you good in the end.