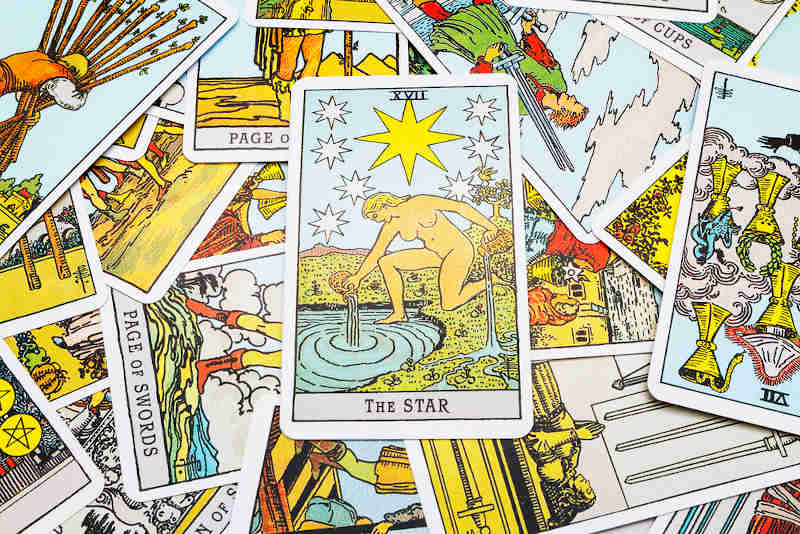 Have you ever wished upon a star? If so, you already know some of the meaning behind The Star card. This card is typically interpreted as hope and optimism, but there are some things in its imagery and placement within the Major Arcana that can color this meaning.

Pamela Colman Smith, the artists of the Rider-Waite-Smith tarot, depicts The Star as a nude blonde woman kneeling at the edge of a calm pool. She has one foot in the water, and one knee on land. In her hands, she holds a set of pitchers — one pours water into the pool, while the other pours it onto the ground.

In the background, there’s a tree with what appears to be a scarlet ibis in its branches. The ibis is one of the symbols of the Egyptian god Thoth, a deity of wisdom, and is associated with life and death. A large yellow star sits in the sky just above the woman’s head. It’s surrounded by seven smaller stars.

The Star is the 17th card in the Major Arcana. It appears immediately after The Tower, a symbol of destruction and upheaval. The Star is typically associated with hope, rebirth, and optimism, but it’s important to consider its positioning.

It’s not just a sign of renewal, it’s specifically renewal after catastrophe. The Tower and The Star, combined, represent the destruction that makes way for new growth and the healing that comes after deep wounds.

As a general rule, The Star is a good sign. It stands for hope for the future, motivation, and contentment. The figure in the card kneels with one foot touching the land, and one in the water, signifying balance within and without.

This card is likely to show up when you’re healing from emotional or spiritual wounds. Even if The Tower doesn’t show up in a reading, The Star is a sign of moving forward from a place of renewal.

When reversed, The Star can mean that you’re feeling hopeless or discontented. Instead of emerging from destruction with a sense of hope, you have emerged feeling beaten down.

Things that used to challenge you just feel like attacks now, and you may be feeling overwhelmed. Be careful that this feeling doesn’t turn into self-defeat.

If you’re single, then this card can be a sign of renewed optimism. You may be healing from emotional trauma and are ready to leave old wounds behind. This is a good time to meet new people. Your positivity and optimism will attract others.

In some cases, this card may signify someone born under the sign of Aquarius. It can also represent the return of a lost love.

When The Star appears reversed in a love reading, it’s a sign of waning hope. You might be choosing to focus on the negative aspects of your partner or situation, or you might have a genuine reason to lose faith in your relationship.

The nature of The Star means that any problems you’re experiencing here are fixable, but it will require some emotional healing and rejection of old behavioral patterns to do so.

If you’re single, you might be losing faith in your ability to find love. This can manifest as self-criticism, a sense of cynicism, or even a hardened heart.

None of this is unfixable, you just have to be ready to make a conscious effort to overcome these limiting beliefs. If you allow them to stay, they’ll only make things harder for you.

When it comes to careers and business, The Star is a fantastic sign. You’re likely to have plenty of opportunities, admiration, and acknowledgement coming your way. Keep your head high and stay optimistic.

Even if it takes a little while, your efforts will be noticed. If you’re looking for a job, take The Star as a sign not to settle. Remain optimistic that the right opportunity will come to you, and it will.

Financially, things are likely to go well for you. Keep your hopes up, but don’t go wild with spending or investing — remember, one of The Star’s key features is balance.

She pours her water on land and in the pool, and has one foot in the water, and one on the ground. Don’t put all of your eggs in one basket, stay hopeful, and you’ll come out ahead.

The Star reversed in a career or business spread can represent feelings of stagnation or a lack of inspiration. This negativity may impact your job performance, turning these feelings into a self-fulfilling prophesy.

If you lose hope, then you give away your power to change things for the better. Don’t forget — The Star says that the ability to improve your situation is in your hands.

The same goes for The Star reversed in a financial reading. If your situation isn’t going the way you’d like, you can fix it. Take a look at your spending, saving, and financial plans, and see what adjustments need to be made. You have all the power you need in this situation.

The Star: Yes or No?

The Star represents hope and optimism. For “Yes or No” readings, that makes it a “Yes.” You can hope for the best here, because things will most likely turn out very well for you. If you’re looking for a sign to proceed, this is it.

If The Star is reversed, however, its meaning is much less positive. In this case, it’s either a “No” or a very negative “Maybe.” This card indicates a focus on the negative in a situation, so you probably aren’t going to get the outcome that you’re seeking.

The Star talks about hope, but it’s a very particular kind of hope. This isn’t a false hope that the universe will change circumstances to be in your favor. This is the kind of hope that’s supported by action.

If you feel optimistic, your feelings will guide you to a brighter future. If you feel hopeless, remember that you hold the keys to changing your life.