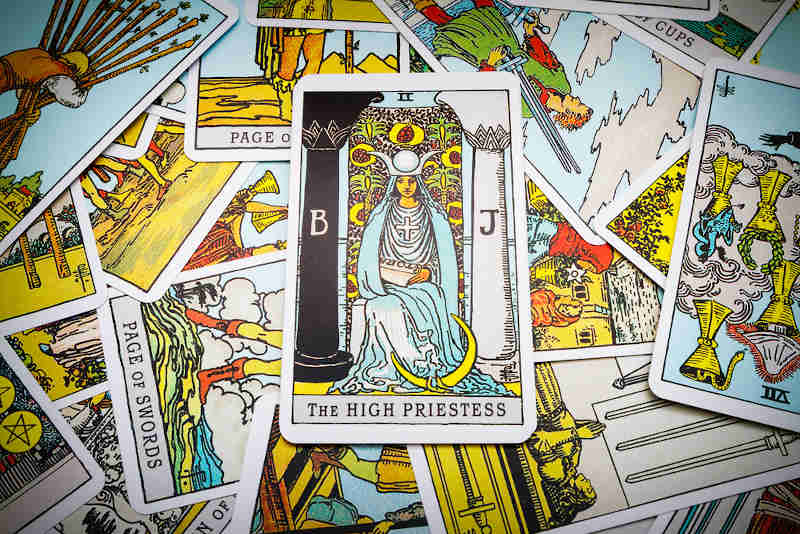 The High Priestess is the feminine counterpart to The Hierophant. The second card of the Major Arcana, she’s said to represent all things secretive, and intuitive — the personification of that which lies beneath the surface.

About the High Priestess

The High Priestess has a really interesting history. In some decks, she’s called “La Papesse,” the Popess. In the Visconti-Sforza Tarot, she was represented by the very specific historical figure: Sister Manfreda.

In Lombardy during the 13th century, there was a sect of Christians called the Guglielmites. They were led by Guglielma of Bohemia, who eventually died in 1281 CE. The Guglielmites believed that she would return to Earth in 1300, putting an end to the male-dominated Papacy and bringing forth a line of female Popes.

In preparation for this event, the Guglielmites elected Sister Manfreda as the first of these Popesses. Unfortunately, this attracted the attention of the Inquisition, who burned her at the stake for heresy.

In the Rider-Waite-Smith deck, this figure was given a bit of a symbolic facelift. She is illustrated in robes of blue and white, with the moon at her feet and a crown of horns and an orb on her head. This ties her to imagery of the Virgin Mary and Goddess Hathor.

She sits between Boaz and Jachin, two pillars which stood at the entrance of Solomon’s temple. The veil behind her conceals all of the secrets she guards. It’s filled with images of pomegranates and palms, symbols of the feminine and masculine (and, perhaps, linking her to Persephone and the underworld).

In her hands, she holds a scroll with the word “TORA,” meaning “divine law.”

The High Priestess stands for secrets. She’s the keeper of sacred knowledge, the holder of intuition, and a font of wisdom.

When she shows up in a reading in her upright orientation, she stands for magic, psychic abilities, and the power to see beyond the surface of things.

In some readings, she may represent the querent herself. Otherwise, she may stand for someone the querent is interested in, but doesn’t know yet — a woman of mystery.

She may mean that you are disconnected from your higher intelligence, which is trying to get through to you. You may also be ignoring your intuition.

The High Priestess is telling you to follow your gut. There is something lurking beneath the surface here, and it’s important for you to find out what it is.

In a love reading for a heterosexual man, she The High Priestess is often someone he desires. For heterosexual women, she often represents the woman herself.

For a gay man, she may appear as advice. For gay women or nonbinary people, she can be the querent, the object of desire, or advice.

The High Priestess is the embodiment of the idiom, “still waters run deep.” Her exterior is calm and unruffled, as befitting a Priestess, but she’s a deep well of passion and intensity.

In the future position, she indicates that intimacy between partners will increase. All told, she’s a very positive omen for relationships.

Reversed, things get complicated. Upright, The High Priestess is passion and intuition. Reversed, she is those things denied. She symbolizes something that you’re ignoring — there’s something in this relationship that you are choosing to overlook, or a gut feeling you’re deliberately looking past.

Conversely, she may also represent dishonesty and emotional imbalance. Rather than standing for red flags about your partner, she may point to you as the source.

If you are keeping your wants, needs, or true self hidden in order to please your partner and maintain harmony, is that harmony really worth it? Are you suppressing part of yourself, or giving your power away to your partner?

In an advice position, she cautions against vanity and superficiality. You also may wish to curb any over-the-top demonstrations of affection.

The position of High Priestess is a vocation in itself, so this card has a lot to say when it comes to careers, business, money, and one’s path in life.

Since High Priestess is a position that only comes after years of dedication, and The High Priestess is holding a scroll of divine law (signifying that she’s literate and educated), she may stand for a period of higher education.

You might wish to go back to school to establish a new career for yourself, or further your schooling in your current path.

She can also stand for divine inspiration. You might be about to embark on a promising creative project, and she indicates that there will be no shortage of inspiration coming your way.

It’s rare that The High Priestess will choose to appear in a money reading, but she might make an appearance when you truly need to rely on your instincts.

She can signify using your gut feelings to guide your decisions. If an opportunity is before you, taking too long to make an educated decision might let it slip away.

The High Priestess may also represent a person who has a significant role to play in a business relationship or financial decision. She’s typically an older woman with a lot of wisdom to offer.

In an advice position in a money reading, she cautions against “splashing your cash.” Keep your financial situation to yourself, and be very cautious discussing it with anyone else.

In a business or career reading, The High Priestess reversed indicates that there’s something missing. Some important piece of information is being withheld from you.

This may be deliberate, or as a consequence of not listening to your intuition. Someone may have a hidden agenda, or be trying to throw you under the bus in order to advance their own career.

The meaning is very similar in a money context. Something is off here — some important piece of information isn’t present.

Before signing any contracts or formally agreeing to any deals, make sure you know everything you’re agreeing to. As the situation stands right now, there’s still more you need to know.

The High Priestess: Yes or No?

The High Priestess is a mysterious woman. Unfortunately, that mystery extends to “Yes or No” readings. While she is very capable and intelligent, and some readers interpret her as a “Yes,” she also represents the unknown and unattainable.

When she’s reversed, however, The High Priestess is a “No.” There is no mystery here — she represents surface-level knowledge and a disconnection from your deeper wisdom. Things probably aren’t going to turn out positively for you here.

The High Priestess is rich with symbolism and history. She typically shows up in readings about love, life paths, and feelings — her concerns are the inner realm.

Whenever she does turn up, listen to her guidance. She’s a bastion of secret wisdom.