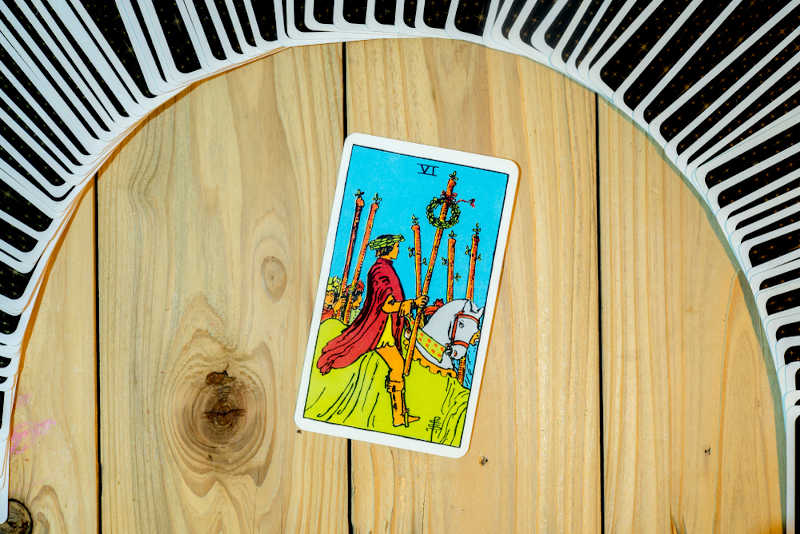 After the crisis point in the Five of Wands, the Six of Wands can be a very welcome reprieve. This is a card of celebration and triumph. One of the figures in the Five card has won, and now gets to enjoy that victory.

Unlike many other tarot cards, however, the Six of Wands is one of those whose reversed position directly contradicts its upright meaning.

About Six of Wands

The Rider-Waite-Smith tarot deck shows the Six of Wands as a young man in a red cloak with a wreath of laurels on his head. He holds a tall staff in his right hand, which is adorned with a similar wreath. He’s also mounted on a light gray horse clad in green.

Other figures are visible in the background. They’re mostly obscured by the man and his horse, but the position of the occasional hand, face, and five other wands indicate that there’s a large crowd around him. It suggests that the young man is leading a parade of some sort, or returning triumphantly from an endeavor.

There’s really nothing else on the card. The sky is blue and cloudless, suggesting a lack of obstacles or strife. There’s nothing in the foreground in front of the man and his horse. All of the focus is on him. He doesn’t seem intimidated by this at all — instead, his posture is upright, his head held high, and he gazes out over the people following him.

This imagery suggests that the central figure knows that this celebration is well-deserved. He has absolutely no qualms about being in the spotlight.

In a general reading, the Six of Wands represents celebration. Unlike other celebratory cards, like the Four of Wands, this is a very particular type of party.

It’s all about victory, achievement, and the celebration of a win. It represents receiving praise and attracting fans. When it appears, expect to enjoy high confidence and strong self-esteem.

Reversed, the Six of Wands gets flipped on its head. This card represents loss, defeat, and even humiliation. If you attract people right now, they probably aren’t going to be admirers — they might be coming with torches and pitchforks instead!

At the very least, you aren’t getting the love and support you feel you need. Your confidence and self-esteem may be tanking as a result, which only makes everything more difficult.

Depending on the context, this card can also represent failed aspirations for fame. It may indicate that the subject of the reading is a little too fame hungry, and is taking a lack of overnight success particularly hard.

If you’re in a relationship, the Six of Wands is a great omen. While it’s a celebratory card, it usually doesn’t represent marriage or childbirth. Instead, it’s a sign of stability and the achievement of mutual goals with your partner. If you want to start a family business or otherwise create something together, this is a fantastic card to get.

If you’re single, the Six of Wands can represent drawing in a circle of admirers. You may also attract your ideal partner. Your confidence is high, and other people find it magnetic. You might be able to have your pick of attractive, successful, adoring people!

If you’re partnered, look out. The Six of Wands reversed hints at tough times ahead. It’s a sign of difficulties, and a lack of the stability to weather them. You or your partner may not be as supportive as you both need right now.

Rather than surrounded by love and admiration, you may be feeling defeated and alone. It’s possible that one of you may be demanding the lion’s share of support and attention, leaving the other to make do with the scraps.

Examine the balance of your relationship. Are you both supporting each other’s dreams and aspirations?

For single people, the Six of Wands reversed indicates that you may not be receiving the admiration you feel you deserve. You might be watching your romantic rivals pairing up, or even getting married, and suffering from wounded pride.

This lack of self-esteem can turn into a self-fulfilling prophecy — if you’re not confident in yourself, it’ll make it more challenging to attract a partner.

As in other readings, the Six of Wands upright is a great sign for business and careers. Your efforts are recognized. You’re not only succeeding at work, people are noticing and supporting this success. You might be receiving rewards or a promotion soon!

For money readings, the Six of Wands signifies that you’re on top of your game. You’ve worked hard, paid down debt, saved, invested wisely, and now get to enjoy the fruits of your labors. Take time to enjoy your success, but don’t forget the things that allowed you to get here.

When the Six of Wands reversed appears in a career or business reading, be ready for trouble. This card takes on an opposite meaning to its upright orientation, so you’re likely to experience defeat, wounded pride, or even accusations instead.

If you own your own business, you may find yourself falling very short of your goals. If you work for someone else, you may be missing out on promotions and recognition.

In financial readings, the Six of Wands reversed warns of losses. If you have a financial goal, it’s likely that you won’t reach it. Your investments may also take a downturn.

Six of Wands: Yes or No?

The Six of wands represents victory, acclaim, and recognition. In a “Yes or No” reading, it’s a “Yes.” This card’s positive connotations indicate that you will receive your desired outcome.

Reversed, this “Yes” becomes a strong “No.” The Six of Wands reversed is defeat and humiliation — basically the direct opposite of its upright meaning. Whatever you’re hoping for, this outcome won’t be it.

The Six of Wands is all about achievement, victory, and success. This isn’t a private success, either — this is success that ripples outward, attracting the notice and admiration of those around you.

When it appears upright, it’s a wonderful omen. When reversed, it’s the opposite: an omen of defeat and embarrassment. Look to the cards positioned around this one for context and advice on how to correct your course and triumph over whatever adversity you face.