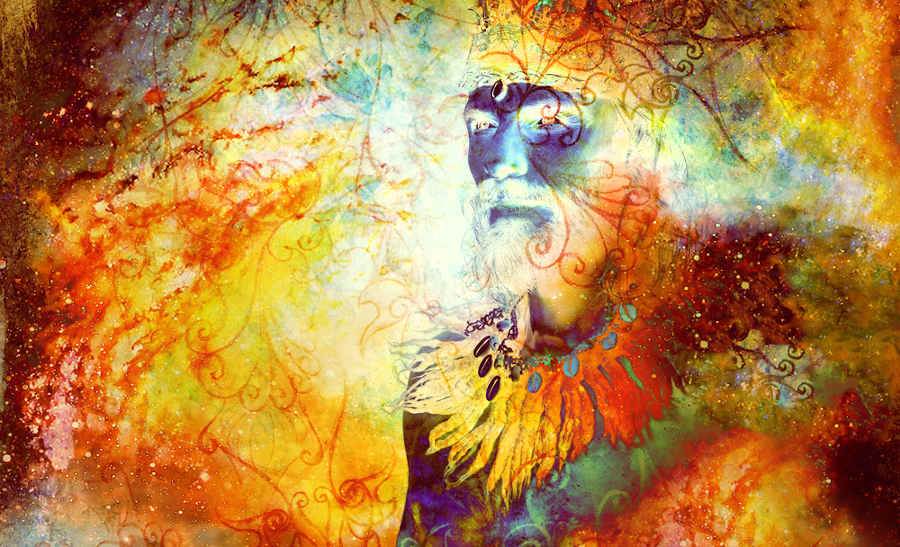 Shamans live with one foot in the mundane world, and one in the world of spirits. This parallel realm is called non-ordinary reality. One of the most interesting things about it is the fact that it comprises three main parts — and, no matter where you go or whom you speak to about it, the experiences of shamans within this non-ordinary reality are consistent the world over.

The three worlds within non-ordinary reality are broadly known as the lower, middle, and upper worlds. Each has their own characteristics, inhabitants, and purpose.

The shamanic lower world is the lowest of the three, but this doesn’t mean it’s any less important than the others. It simply means that the shaman must descend beneath the level of the middle world in order to reach it. This area is usually depicted as the roots of the world tree, the Axis Mundi.

In shamanism, those who undertake a journey to the lower world typically begin by making their spirit enter some kind of hole in the earth. This can be the base of a hollow tree, the center of a hollowed stump, the entry hole of an animal or insect burrow, or a crack or cave.

The lower world is inhabited by spirits of plants, animals, stones, and even the elements. In some shamanic traditions, it’s also the realm of some branches of the fae — otherworldly beings regarded as protectors or spirits of nature.

Every person has an animal guide (not to be confused with the spirit animals found in some indigenous American traditions) that, like a guardian angel, is with them from birth. The lower realm is where people can go to meet and communicate with these guides.

The lower world is a place of primordial life. It’s a realm of lush growth, change, transformation, and instinct. Shamans often visit this realm to work with animal guides, for emotional healing, and to help people confront their fears.

In some shamanic healing modalities, the lower world corresponds to the past. This is where people journey to heal trauma.

The shamanic middle world is the spirit world that corresponds to ordinary reality. Most, if not all, shamans are animistic — they acknowledge the spirits of all things, not just humans and animals. The middle world, then, is made up of the spirit dimensions of the everyday world we live and work in.

To reach the middle world, the shaman must simply attune themselves to the spiritual dimensions of ordinary reality. Some practices in shamanism involve sending one’s spirit to a well-known place in ordinary reality, then traveling outward from there.

This realm also comprises the parallel dimensions of hidden-away beings. Like the lower world, some branches of the fae exist in these places. Other than that, this realm is inhabited by the spirits of all of the individuals that exist in ordinary reality.

In shamanism, the middle world is the non-ordinary shadow of the mundane world. Shamans go here to find out things about our world, locate lost or stolen objects, or work with the spirits of a specific location.

For example, the shaman of a town near a river might journey to the middle world to find out why fish are less plentiful. With the information gained during this journey, they can figure out what needs to be done to help the fish thrive and replenish their numbers.

In some shamanic healing modalities, the middle world is the present.

The shamanic upper world lies above the middle and lower worlds, but it has no more or less importance than the other two. To reach it, a shaman must find a way up — either by climbing a tree, ascending through a hollow tree trunk, flying, traveling up a rainbow, or being carried by helpful spirits.

In some traditions of shamanism, the upper world can be reached by traveling down to the lowest depths of the lower world, then descending even further.

This journey can be a bit more jarring than traveling to the lower or middle worlds. The energy is foreign, and the inhabitants are like nothing in ordinary reality. Sometimes, the shaman might even physically feel the effects of crossing the boundary between the middle and upper worlds.

This celestial realm is inhabited by guardian spirits, enlightened beings, and angels. (Not all shamanic traditions have angels in the same sense that Christianity does, so “angel” is a catchall term for these divine, helpful beings.) There may be some ancestor spirits, or the spirits of shamans who have passed on.

It’s where shamans go to obtain guidance from celestial beings, ancestors, or those who have achieved enlightenment during their time on Earth. A journeyer may need to visit the lower world for soul healing before they can travel elsewhere.

Astral travel has many things in common with shamanic journeying, but one key difference: The astral realm isn’t the same as the lower, middle, and upper worlds, and isn’t accessed the same way. As a means of comparison, the astral realm is possibly closest to the middle world.

People who work within the astral realm hold that everything with a physical body has multiple other energetic bodies beyond that. These are arranged in strata, like the thin, multicolored candy layers of a jawbreaker.

Following that, the world itself has an astral or etheric body. There are also some beings that inhabit the world and have etheric bodies, but no physical forms. This is one theory to explain the appearance of cryptids and extra-terrestrials — without a physical form, they are able to manifest only briefly, when the conditions are right.

In shamanism, the journeyer travels to other planes of existence. However, the astral realm isn’t truly separate from the physical, ordinary reality we already inhabit. Just like birds and shrimp are capable of seeing many colors that humans can’t, people who work with the astral realm train themselves to be sensitive to the etheric energies of the mundane world.

All of these explanations are well and good, but are the shamanic worlds and astral realm actually separate places? Some say yes, but others disagree. That’s where the worlds of consciousness come in.

One theory to explain the consistency of experiences in shamanism involves around the collective unconscious, and the idea that humans have certain instincts, experiences, and interpretations that are shared across cultures. Therefore, there may not be a set lower, middle, and upper world. Instead, these terms may simply serve to categorize types of experiences within shamanism.

Meanwhile, the shamans themselves may be journeying through their own pieces of the infinite consciousness. Each shaman therefore may have their own discrete non-ordinary reality in which they journey.

Dreams are intertwined with the shamanism. While a shaman always remains awake and aware of the world around them while journeying, dreams are nonetheless another way to obtain information, receive messages, and make discoveries.

Traditionally, shamans served as dream interpreters, as well as healers and liaisons to the spirit worlds. Dreams were messages from other realities, and, as such, had something important to say.

Entering the dream world is done while asleep. Unlike regular dreams, which may be disjointed and illogical, dream journeying tends to be vivid, cohesive, and follow an internal logic.

People may even dream of entering the lower, middle, or upper worlds. Upon waking, the dreamer interprets the symbols and messages given to them in the dreaming world. If necessary, they may undertake a shamanic journey to one of the other realms to find the subject of their dream and ask what it meant.

Shamanism is a way of integrating spiritual, emotional, and physical experiences. Everything has significance, from the shaman’s community, to their environment, to messages and information gained from dreams and journeying through non-ordinary reality.

Non-ordinary reality is where shamans go to do their work, bringing back the tools they need to keep the mundane and spirit worlds in harmony with each other.