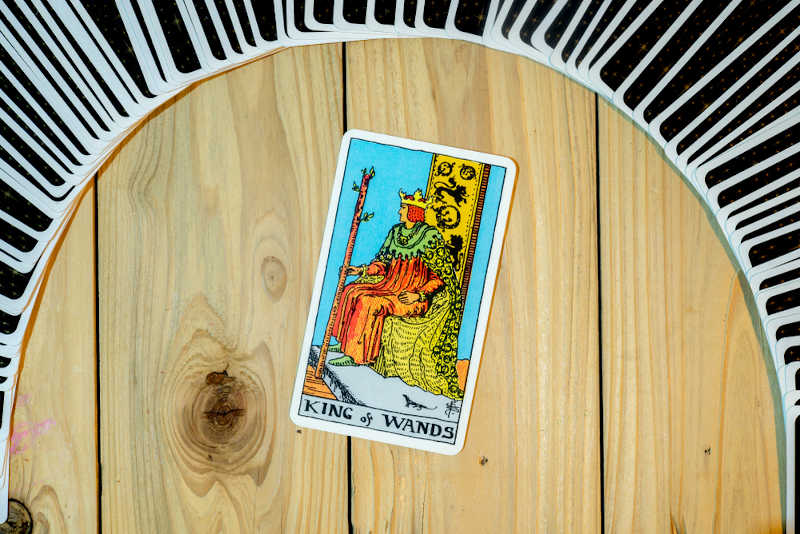 The Kings are the last of the court cards. They, alongside the Queens, are the rulers of their suits and representatives of their elements.

For the King of Wands, that means the element of Fire. He is a charismatic, active, and creative leader, who embodies pride, passion, and freedom.

About King of Wands

As with the Page, Knight, and Queen of Wands, the Rider-Waite-Smith tarot gives the King a lot of elemental imagery. His throne is adorned with images of salamanders, an animal associated with Fire.

They match the salamander motif of his cape, and the small black salamander standing at the base of his throne. The Kings clothing is in shades of red and yellow, the colors of fire, and his crown is shaped like tongues of flame.

The King holds a single wand in his hand, while his free hand rests at his side. His gaze is focused outward, and his expression is firm and resolute. He knows he’s the absolute authority of his suit, and he embodies this purpose fully.

The King and his throne take up most of the card’s visual real estate, but you can see slivers of the background here and there. It’s very similar to the background of the other court cards in the suit of Wands — a desert, complete with rolling dunes and an expanse of blue, cloudless sky.

As part of a general reading, the King of Wands represents control, authority, and power. He is a positive omen for anything that requires passion and energy.

Expect to be looked up to and admired by those around you right about now — you’re likely exuding Fire energy, and others are going to want a piece for themselves!

If you’re normally a shy person, or one who is invested in tradition and conformity, the King of Wands may advise you to take a chance. You’re at a point where you don’t need to worry what others think about you. Present yourself how you wish, and don’t be afraid to rock the boat a little. You can muster the confidence to pull it off now.

As a face card, the King of Wands can signify a person. In this case, this person is likely to be mature, masculine, and born under a Fire sign. This person is also energetic, passionate, carefree, and bold.

Reversed, the Kind of Wands can represent a lack of will, creativity, or energy. You might have an idea you want to execute, but feel that you have no way to go about doing so.

This card can also represent giving your power away to authority figures that may not have your best interests in mind. You might be very self-conscious and hyperaware of how others perceive you right now, which can make taking action very difficult.

In some contexts, this card may represent the energy of Wands taken to an extreme. When upright, a Wand is a lush, flourishing branch, and a tool for creativity and magic. Reversed, it can become a club. You might find yourself lacking confidence, and attempting to make up for it by trying to control your situation through aggression and brute force.

As a signifier, the King of Wands may represent a person who is older, male or masculine in bearing, a Fire sign, and very stuck-up, aggressive, and brutish.

The King of Wands upright serves as both a positive omen and a source of advice for love and relationship readings. He can indicate warmth, passion, and protection, so your relationship is likely to be pretty happy when he appears.

As advice, he cautions you that you shouldn’t allow yourself to depend too heavily on your partner. Admiring them is one thing, but clinginess and neediness are something else entirely.

If you’re single, the King of Wands can represent feeling confident, attractive, and passionate — in other words, you’re in a great position to welcome in a new relationship! That said, the King of Wands is also a very carefree figure who isn’t of a mind to be tied down, so you may find yourself just enjoying the single life for now.

He may also signify a potential romantic partner. If so, this person is likely to be male or masculine, older, a Fire sign, and very passionate, caring, and adventurous.

If the King of Wands appears reversed in a love or relationship reading, he comes with a warning. If the King upright is a warm, passionate, protective authority figure, then the King reversed is hot-tempered, aggressive, and controlling instead.

At worst, this relationship may be marked by lots of arguing, and possibly abuse. At best, you may have trouble with commitment. The King of Wands is very free, and you or your partner may not want to enter into a situation that makes either of you feel “tied down.”

For single people, the King of Wands reversed can indicate struggles with commitment. It may also signify a prospective romantic partner who is masculine or male, mature, a Fire sign, and controlling, commitment-phobic, quick to anger, and potentially disloyal.

Be careful, as this person may also be extremely charming on the surface.

As a sovereign, the King of Wands is the ruler of his domain. When he appears upright in a career or business reading, you’re probably feeling like a champion.

You might be in a position of authority right now, or spearheading a project that’s important to you. You’re likely full of energy, with sky-high ambitions and all the tools you need to make them a reality.

This card is a particularly good sign for people looking to start their own business.

In money readings, the King of Wands upright indicates that you have good control over your finances. Some of your success may be due to some out-of-the-box thinking on your part.

Whatever the case, keep doing what you’re doing — right now, the way you’re managing things is working for you.

Reversed, the King of Wands is a bad sign for business and career readings. You might find yourself cowed or overshadowed by a co-worker, or find that you lack the drive, ambition, and passion you once held for your career.

You might also suffer from “impostor syndrome,” and feel that you don’t have the creativity, authority, or experience to do your job.

In some cases, this card may mark arrogance. Instead of feeling unfocused or inexperienced, you may be steamrolling over your colleagues. This only makes it harder to get the results that you want.

Financially, the King of Wands reversed indicates that you might be spending a little recklessly. The King is carefree and unconstrained, but, sometimes, restriction is a good thing. You may also be hoping for a windfall, rather than proactively seeking ways to earn the money you need. Funds are likely to be tight right now.

King of Wands: Yes or No?

The King of Wands is largely positive. He’s an engaged ruler, who represents optimism, charm, and courage. In a “Yes or No” reading, he indicates that you’re going to get the outcome that you want.

On the other hand, the King of Wands reversed isn’t nearly so benevolent. It may be best to view him as a “Maybe.” He can be a very forceful and effective leader, but he’s also a hot-headed tyrant. Things might not go the way you hope for. If they do, you might find that the outcome you want comes at a high price, or else isn’t nearly as desirable once you have it.

The King of Wands is the embodiment of Fire energy. As a ruler, he is proactive, energetic, and ambitious. His gaze is turned outward, toward all of the adventures, glory, and riches he could be working toward.

Pay attention when and where he shows up, because he brings a lot of power and authority with him.