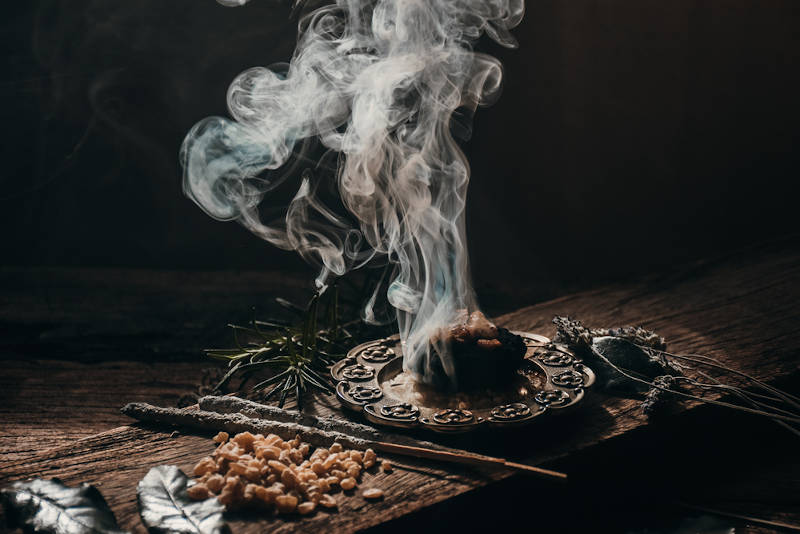 Magic isn’t always about drawing in the things you want. The flip side to attraction is banishing, and it’s an equally important skill.

This is what allows you to get rid of negative energy or entities, remove unwanted attachments, and otherwise banish things from your life.

Most banishing spells use a combination of techniques, and herb magic is one of the most common. There are numerous herbs that are ideally suited for this purpose.

Here are some of the best herbs for banishing:

Members of Agrimonia are used as hex-breakers. They banish the negative energies and baneful magic sent towards the target, and return them to the sender.

It’s also a useful ingredient in incenses or herbal charms to repel other people’s jealousy and ill-wishes. When dried, powdered, and blended with salt, it can be sprinkled around the home to banish jinxes.

Magically, there’s a lot of crossover between cleansing, banishing, and protection ingredients. The genus Angelica can handle all three. Burning the leaves aids exorcism rituals, and soaking in an infusion of them removes curses.

The roots are powerfully protective, to the point that they can even end up guarding the user against seemingly innocuous things.

Asafoetida isn’t an herb in itself — it’s actually a spice made from the dried latex of members of the genus Ferula. It has a very pungent smell, akin to strong garlic and sulfur, which has earned it the nickname “devil’s dung.”

When cooked, it has a smell and taste similar to onions. It’s a common ingredient in protection spells, and is one of the best herbs for banishing.

Asafoetida is capable of getting rid of negative energy, evil entities, or even demons. It’s an herb no magic practitioner should be without, since it’s both powerful, and safe for use in food.

The dried leaves of Laurus nobilis are ideally suited for burning. They release a woody, spicy aroma that can help cleanse a space, and banish evil spirits during exorcism rituals.

When crushed and mixed with sandalwood power, bay is also said to remove curses. They’re also a useful banishing ingredient for floor washes.

Cayenne pepper is a common ingredient in hot foot powder. This is a traditional preparation used in Hoodoo for getting unwanted people to go far, far away. In a similar vein, this herb can be used to drive off unwanted spirits.

In addition to repelling mosquitoes and other biting pests, Cymbopogon winterianus or C. nardus (not to be confused with members of the genus Citronella) also repel negative energies.

Most practitioners rely on the oil for this — add it to a banishing blend, or use it to anoint a candle dedicated to this purpose.

Succisa pratensis earned the name “devil’s bit” because the Devil became so enraged at its usefulness, he attempted to bite its roots. Another story says that the Devil used it for his own magic, until the Virgin Mary took away the plant’s ability to curse.

Ever since, it’s been used by magic practitioners for protection and exorcism. It’s mainly used for guarding against violent attacks, magical or mundane.

Because of its ability to thwart the Devil, some also use it to repel evil entities. Grow some near the door of a home in order to ward the property and ensure that you’ll always have a fresh supply of this herb.

A variety of species are given the name fleabane, including Erigeron speciosus, Inula dysenterica, and Corydalis species. In any case, just like the fleas it’s said to be the bane of, this plant is used to exorcise lesser evil entities.

It’s also useful for protection. Some guides recommend using the seeds, or infusing the leaves or flowers in oil.

Most sources consider it ruled by Saturn, which is also associated with banishment. Interestingly, it has historically been used to banish internal parasites as well as spiritual ones.

Few herbs have as strong a reputation for banishment as Allium sativum. Folklore credits it with repelling vampires, and it has historically been burned, used in oils, and strewn to banish and keep evil entities away.

One interesting method for banishing a bad habit involves writing the habit down on a slip of paper, and placing it in a pot of soil under a clove of garlic. As the clove sprouts and grows, it will help the user overcome their unwanted habit.

Helleborus species resemble flowers, but aren’t. What appear to be their petals are actually modified leaves — the real petals serve as tiny structures that hold nectar.

The name “hellebore” comes from two Greek words that roughly translate to “injurious food,” alluding to its very toxic nature. Magically, it’s used in rites to heal mental or emotional distress, as well as to banish evil spirits.

Members of Juniperus are used for healing and magic. Magically, it’s used in funerary rites, for protection, and as a banishing herb — specifically for getting rid of evil spirits.

It produces a lot of pleasant-smelling smoke when burned on charcoal, which is suitable for cleansing a space or driving away evil.

Verbena species, especially V. officinalis, have been considered sacred herbs for ages. Among its many uses, it’s used to banish negative energy from a space.

An infusion of vervain in water makes a great wash for altars, meditation rooms, or magical tools.

Artemisia absinthium is most famous as the herb that gives absinthe its alleged hallucinogenic effects. It’s also very bitter and has anthelminthic properties, hence the name “wormwood.”

Interestingly, it’s said to call up spirits when burned with mugwort, but is also used to banish evil ones.

Banishing is as important a skill as grounding. Before you can safely draw anything to you, you should know how to send it away. Or, in the words of H.P. Lovecraft, “do not call up that which you cannot put down.”

These herbs have been helpful banishing allies for hundreds, if not thousands, of years.