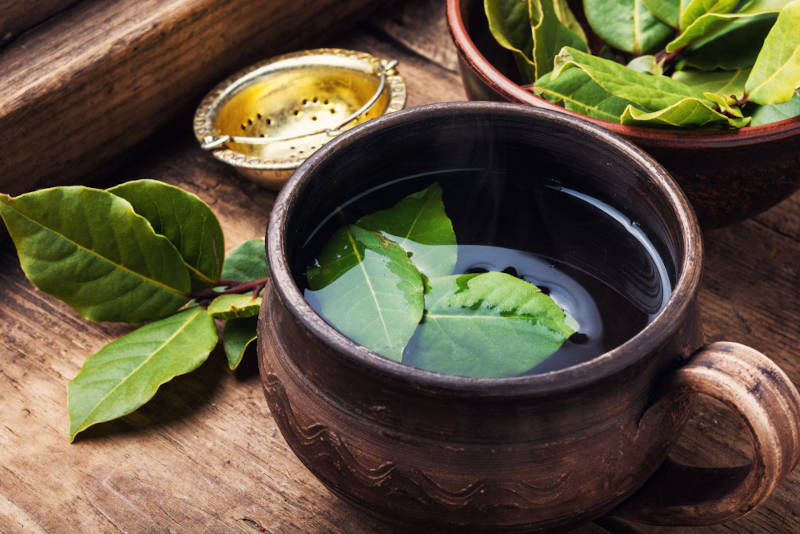 Tons of recipes call for the addition of a single leaf from the bay laurel tree (Laurus nobilis). Its subtle, complex aroma contributes a je ne sais quoi to anything to which it’s added — while difficult to pick out, a dish just wouldn’t be the same without it.

As a magic herb, bay leaves aren’t nearly so subtle. Whether fresh or dry, they contribute a powerful, commanding energy.

Bay leaves are spells unto themselves. Even when used alone, they make for powerful protective amulets. They also add power to any mixture in which they are included.

In some traditions, they’re used as a wish herb. Write a wish on a whole leaf and burn it to release its energy. Combined with other herbs, they’re often used in magic to draw love or money.

Bay leaves have some mild entheogenic effects. When burned, they can induce visions. Some witches place them under their pillows for prophetic dreams.

This herb also has some purification ability. A bunch of the leaves may be used to scatter salt water to cleanse a ritual space. When burned, the smoke drives away evil spirits.

Bay leaf is ruled by the Sun and the element of fire. Astrologically, it’s associated with Leo. It’s sacred to Apollo, and suitable to include on an altar to him.

In studies of Staphylococcus aureus and Escherichia coli, bay leaf extracts were found to inhibit their growth. A different study found that bay leaf also inhibited Helicobacter pylori, the bacteria responsible for ulcers.

In vitro studies found that bay leaves inhibit the growth of some cancer cells, though the mechanism for this action isn’t yet fully understood.

Bay leaves can lower blood sugar. A study of people with type 2 diabetes found that capsules of dried bay leaves decreased blood glucose levels. It should be noted that the doses in this study were much higher than the amounts typically used for culinary purposes.

A poultice made of boiled bay leaves and berries is a traditional folk remedy for symptoms of a cold or flu.

Another folk remedy involves brewing the leaves into a tea. This tea is said to help with urination and serve as a way to improve overall health.

As with any herb, allergies are always a possibility. Swap bay leaf for something else if you’re allergic to it or any of its relatives. Allergic reactions can vary pretty widely, ranging from a mild rash, to indigestion, to swelling and itching of the mouth and face, to anaphylaxis.

If you make a topical preparation using bay leaf, such as an anointing oil, do a patch test before use.

Bay leaves are tough and indigestible. If you make food or brew with bay leaves, remove them before consumption.

While Laurus nobilis is safe, other laurels may not be. Kalmia latifolia, the mountain laurel, is toxic. Always make sure you have a positive ID for your spell ingredients, especially if you plan on ingesting or wearing them.

In Greek, the bay laurel is named for the nymph Daphne. Daphne was a priestess of Gaia whom Apollo fell madly in love with. When he tried to seduce her, she begged for help from Gaia. To protect her, Gaia turned her into the laurel tree.

Apollo, stricken with grief, consoled himself by fashioning laurel wreaths from its branches. This is why laurel wreaths were given as prizes of the Pythian Games, held in Apollo’s honor.

The bay laurel was similarly important in Roman culture. It was a symbol of victory, immortality, prosperity, health, and purity.

Laurel’s significance survives to this day in the word baccalaureate and the term poet laureate. It’s also the basis for the idiom “to rest on one’s laurels,” meaning to stop putting in effort and rely on one’s past achievements or reputation.

Getting Started With Bay Leaf

It’s easy to find whole dried bay leaves in the spice section of most supermarkets. If you’d like to grow your own, bay laurel requires a sunny, warm location and rich, well-drained soil.

If you live in a place that experiences cold winters, you can still grow laurel in a pot — you’ll just have to bring it indoors when the weather cools.

Since bay leaf is such a powerful herb on its own, getting started with it is very simple. You can try an easy wishing spell by holding a whole bay leaf in your hands, visualizing a wish, writing your wish on the leaf in non-toxic ink, and then burning it. As the smoke rises, it will carry your wish to the ether.

Otherwise, you may wish to experiment with bay laurel as a divinatory incense (just be sure to open a window), or simply as an addition to other spell mixes.

As a power herb, it adds a noticeable “oomph” to herbal mixtures. Try crumbling some of the dried leaves and adding them to your favorite loose incense.

Bay laurel is a powerful herbal ally with a long list of uses. Even if you don’t intend to use it for divination, purification, love, or money, it’s still worth keeping some around to give extra power to urgent spells.