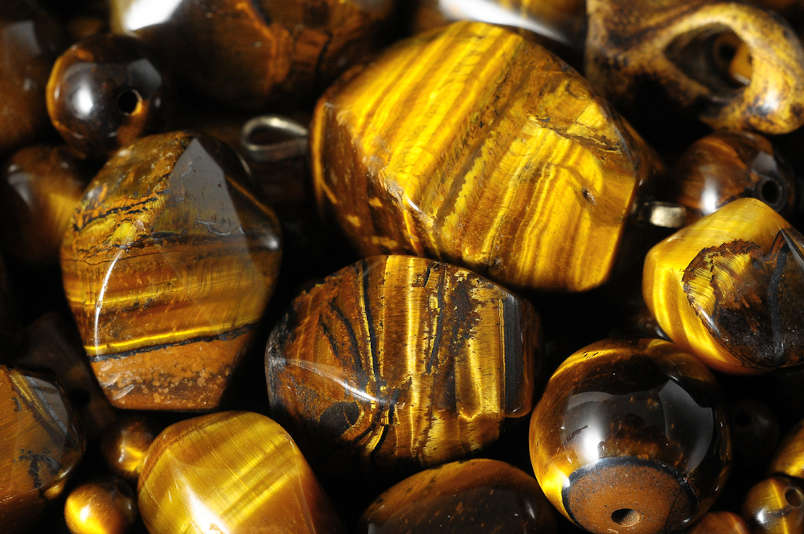 Tiger’s eye is a fascinating stone. With its golden shimmer and striking bands of yellow, orange, brown, and black, it’s probably not surprising that it’s very popular for jewelry and as a mineral specimen.

Similar, but slightly less well-known, is the hawk’s eye — a stone resembling tiger’s eye in shades of blue, gold, and black.

Aside from their aesthetic value, these gems also have a long history as healers and magical tools.

Believe it or not, tiger’s eye is mostly quartz. It gets its intriguing shimmer (dubbed “chatoyancy”) from amphibole fibers that form in parallel lines.

Tiger’s eye gets its stripes and chatoyancy in a very interesting fashion. It’s what geologists call a “pseudomorph,” meaning that it starts out as one mineral, and changes into another over time.

Crocidolite is a type of asbestos, and part of the family of amphibole silicate minerals. Over time, quartz infiltrates the crocidolite. In its earlier stages, it’s hawk’s eye — still blue from the natural bluish color of crocidolite. If the mineral contains a lot of iron, oxidation produces the gold, yellow, brown, and orange of typical tiger’s eye.

There’s another rock related to tiger’s eye, known as tiger iron. This is a combination of hematite, red jasper, and tiger’s eye that forms striking bands. It’s primarily used for ornamental purposes.

Among crystal healers, tiger’s eye is purported to help with disorders of the eyes, throat, digestive tract, and reproductive organs. It’s also used to relieve pain and heal bones, including aiding with spinal alignment.

Tiger’s eye is best known as a protective stone, but it’s also considered a talisman for wealth and prosperity. It helps shield against bad luck and the evil eye, while drawing good fortune to the user. Anyone who has reason to believe that they might be the target of baneful magic should wear or carry this gem for protection.

As a brown or golden stone, it’s also often used in animal magic of all kinds. It can assist with communicating with companion animals, animal healing, and even spells for conservation efforts — especially for big cats.

Brown is also associated with grounding, stability, and finding lost things. Stones that are more on the golden side can assist with success and wealth-drawing magic.

The blue variant, hawk’s eye, it’s used for luck, communication, and enhancing psychic abilities. While it doesn’t have the same Earth-element connotations of stability and protection that brown tiger’s eye does, it does benefit from the magical associations of the color blue. That makes it suitable for spirituality and seeking the truth.

It’s also said to help the user make good choices, especially in the business world. Wear or carry it to job interviews and meetings to give your business senses a boost.

For those who work with chakras, tiger’s eye is used to open and balance Manipura, the solar plexus chakra. This can help the user feel courage, healthy self-esteem, and vitality, as well as ease physical ailments associated with this energy center.

Hawk’s eye is used for Visuddha, the throat chakra. This facilitates communication and speaking one’s mind, and eases ailments of the neck, throat, and larynx.

In ancient Egypt, the golden shimmer of tiger’s eye was believed to be the rays of the Sun God Ra. This stone thus held the power of the sun, and was often worn by royalty. When they died, they’d often be entombed with tiger’s eye to help them navigate the afterlife.

In ancient Rome, tiger’s eye was believed to impart courage and power. Warriors would wear the stones as battle talismans to combat fear, make them stronger, and bring victory.

In Chinese folklore, tiger is a powerful force for good that protects against evil. People would wear carved tiger’s eye amulets to guard them against malevolent spirits.

How to Cleanse Tiger’s Eye

Among many crystal experts, the best way to clean tiger’s eye is to let it sit in the late afternoon sun for a few minutes. Each stone is different, however, so you may feel drawn to cleanse your gemstones in a different way.

Fortunately, tiger’s eye is fairly durable. While sunlight is the most effective, there are also other ways to cleanse tiger’s eye.

Some methods for cleansing tiger’s eye include:

While it’s safe to wash tiger’s eye in liquids, you may wish to avoid using it to create gem elixirs. Tiger’s eye may leach harmful metals or other substances into water, which you wouldn’t want to drink.

If you wish to make a tiger’s eye based elixir, set the stone in a small glass dish or test tube within a container of water. Don’t drink water that has come in contact with this stone.

Getting Started With Tiger’s Eye

Tiger’s eye is fairly abundant and inexpensive, so it’s a good choice for those wishing to use it in money-drawing or protective spells. One popular method involves making a protective sachet.

To do this, you will need a white pouch (or a square of white fabric and a string), a tiger’s eye, and your choice of protective herbs. Rosemary, angelica root, dragon’s blood resin, rose, or yarrow are all good choices.

Begin by holding the tiger’s eye in your dominant hand. Draw energy up from the ground and down from the sky, allowing it to mingle within you.

Visualize yourself surrounded by a protective shield of energy at all times. As you picture this, send the energy down your arm, into the stone. Tell the stone what you want it to do, place it in the white pouch, and thank it for its help.

Next, add a few pinches of each of your herbs. As you do this, say each herb’s purpose out loud. Ask them for their help, and thank them as you tie the pouch closed.

When the sachet is filled, hold it in both hands. Breathe in the scent of the herbs, and exhale into the fabric. You can recite a protective chant here if you wish, or say something simple, like, “By these herbs and this stone, I am protected from all harm.”

Carry the sachet on you, in a pocket or bag. You can also make one of these specifically for safe travel, and keep it in your car’s glovebox.

Re-charge it periodically by setting it under the late afternoon sun, holding it in your hands to fill it with your intention, and repeating the chant. If you like, you can also anoint the pouch with a drop of a protective oil blend, or an oil made of any of the herbs you chose.

Tiger’s eye’s mysterious shimmer has drawn people to it for millennia. No matter whether you prefer the deep golden hues of tiger’s eye, or the blues of hawk’s eye, this stone is a potent healer and protective ally in magical workings.