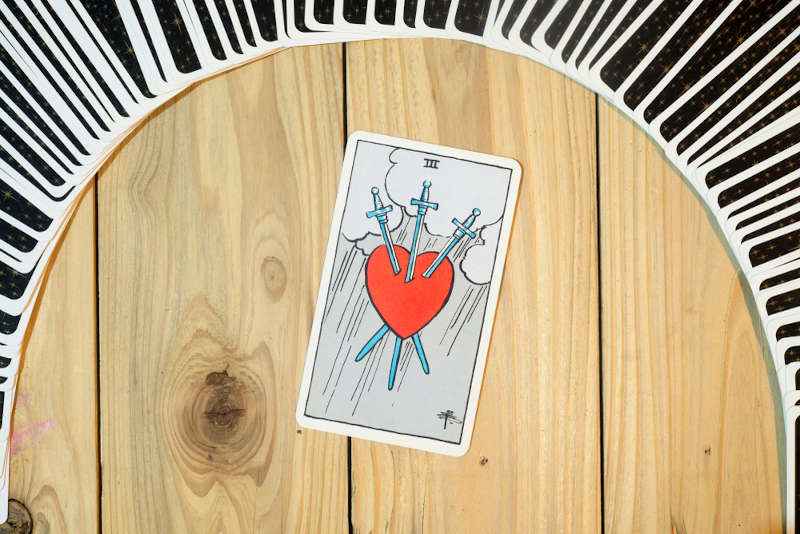 The Three of Swords is one of those cards that doesn’t have a lot of complicated imagery or layers of metaphor. It’s almost refreshingly simple — what you see is very much what you get.

Unfortunately, when it comes to this card, that usually means heartbreak.

About Three of Swords

In the suits of the Minor Arcana, Threes are where things begin to get moving. Aces set up the new beginning of a cycle with optimism and enthusiasm. Twos represent the planning stage and coming together of different elements. Threes are where that planning begins to move forward into action.

In the Rider-Waite-Smith tarot, the Three of Swords is shown as a red heart pierced by three swords. There are heavy, dark clouds in the background, and lots of rain.

There aren’t really any other visual elements here — the background is a flat gray, so the red of the heart and blue of the steel swords stands out. This, in itself, is significant.

This card is said to speak of a very profound loss. In other words, the kind of loss that makes it difficult to focus on anything else other than the pain of it.

When the Three of Swords appears, things aren’t good. This card is all about betrayal, pain, heartbreak, loss, rejection, and grief. This can be caused by a death, divorce, or anything in between.

The positioning of this card is important. It’s only a Three — not even halfway through the cycle of the suit of Swords. Though this loss and pain might seem insurmountable right now, life will go on. You will heal and become stronger for it, if you allow yourself to.

For some cards, a reversal is interpreted as the opposite of the card’s upright meaning. This isn’t the case for the Three of Swords. A reversed Three of Swords is just as negative as it is upright, but the emotional blow may be softened by some mitigating circumstances.

Look to the cards surrounding this one for more information. In some cases, it appears as a sign that it’s time to take steps toward releasing an old emotional wound.

Remember, you can only heal if you let yourself do so. Refusing to wallow in pain doesn’t mean you don’t love someone, or that you’ve forgotten them. Would your lost loved one want you to continue using them to torment yourself?

As one of the most negative cards in the entire tarot, the Three of Swords isn’t a great sign in a love reading. If you’re with someone, it represents arguments, tears, heartbreak, or even loss of some kind (like a breakup, or even death).

Since this is a Three, it can represent the intrusion of a third person. This may be a partner in infidelity, an in-law trying to cause trouble, or even a divorce lawyer trying to mediate the situation.

If you’re single, this card can represent loneliness. You may still be coping with emotional trauma from your last relationship, or, if you haven’t had a romantic partner before, familial wounds. You need to focus on healing the root of this pain before you’ll be able to have a happy relationship.

When this card shows up in a reversed orientation, it can signify the dulling of an emotional pain. You may be in a place where you’ve still experienced a significant wound, loss, or betrayal of some sort, but you’re starting to heal, forgive, and move on.

You and your partner may even be in the initial stages of a reconciliation. Be sure that you truly are ready to forgive each other — if you continue to hold on to unresolved emotional pain, it can poison your relationship.

The Three of Swords reversed also serves as a warning. Sometimes, it shows up when you aren’t really working on healing — just repressing. Like a splinter that goes ignored, these buried emotions can fester into something much worse. Be cautious.

If you’re single, the message is very similar. Focus on healing your past wounds, not simply repressing them, so they don’t crop up again and again in your new relationships.

In a career context, the Three of Swords is lost opportunity, a stressful environment, or even co-workers that betray you. You may even be facing a job loss, company bankruptcy, or other major disruption. No matter what the case is, the message is clear: Your job is a source of anxiety and misery for you right now.

Remember, Three is just the third step in a cycle. This, too, shall pass. Make the most of whatever time you have to get more education, certifications, or skills that will help you stay competitive and marketable.

In a financial reading, this card indicates losses and monetary stress. You may be facing a lot of unexpected expenses and investments that perform poorly. Don’t ignore them and hope the situation will right itself — seek out whatever help you need to get your finances back on track.

When the Three of Swords is reversed in a career and business reading, things still aren’t good yet, but they seem to be getting better. You and your co-workers may be shifting your focus from putting out fire after fire, to getting things done and moving forward.

On the other hand, you all may be burying problems that will only crop up again in the future. Focus on creating permanent solutions, not temporary fixes. Covering up and ignoring a stab wound only makes things worse in the long run.

Financially, the Three of Swords reversed often indicates an improvement in your monetary situation. You may not view things that way, however.

Even though your financial stresses may be lightening up, it can be difficult not to stay stuck in the grief and fear caused by a serious loss. Be careful that you don’t let this mindset keep you from making necessary improvements to your life.

Three of Swords: Yes or No?

The Three of Swords is a tough card to get in pretty much any context. For a “Yes or No” reading, it’s a resounding “No.” This card is all about disappointment, heartbreak, and emotional pain, so don’t expect the outcome you’re hoping for.

Reversed, things look a bit better. In this case, the answer is most likely a “Yes.” This “Yes” doesn’t come without difficulty, however — since the Three of Swords reversed indicates an emotional release and healing from difficult times, you’ll still have had to go through some rough stuff to get there.

The Three of Swords isn’t a very pleasant card. It never has anything good to say — only stories of loss, pain, anxiety, and grief. Nonetheless, these are all things that come to everyone in the world at some point.

If you’re willing to examine its context and heed its lessons, you can move forward from the Three of Swords as a stronger, more resilient person.