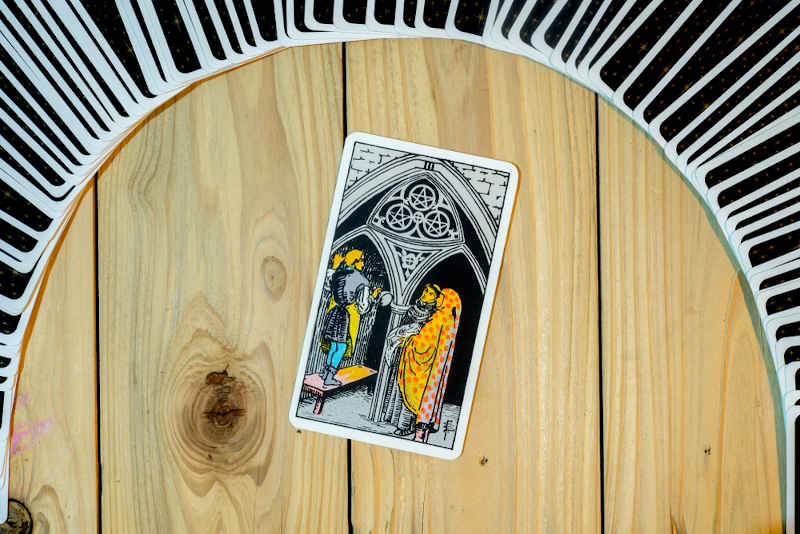 Some tarot decks, like the Rider-Waite-Smith tarot, have beautifully illustrated Minor Arcana cards that depict scenes related to their meanings. Others, like many of the older tarot decks, have simple illustrations more like playing cards.

In these decks, it’s important to recognize the numerical significance of each of the pips cards. All of the suits move in cycles — the Ace is the beginning, the Ten is the culmination, 5 is the climax of the action, and Three is when the action gets going.

If each suit of the Minor Arcana were a novel, then Threes would be when the characters set out on their adventure. The Three of Pentacles is the beginning of the action for the wealth, prosperity, Earth-oriented suit of Pentacles.

About Three of Pentacles

In the Rider-Waite-Smith tarot deck, this card depicts three people standing below a beautiful, intricately carved archway. Two of them, a monk and a nobleman, watch as a stone carver explains his work.

The monk is robed in gray and has tonsured hair, illustrating his experience and devotion. The nobleman is clad in an elaborate hooded robe. The stone carver, meanwhile, is simply clad in shades of blue gray, with a yellow apron. The archway above them is immaculately carved with three pentacles and a flower.

The three central figures tell the story here. The monk has years of religious devotion and scholarly experience on his side. The nobleman has wealth and power. Despite this, they aren’t there to tell the stone carver how to do his job. He might not have scholarship or political power on his side, but he knows what he’s doing, and he does it well.

Rather than use their irrelevant clout to try to dictate how the stone carver works, they’re holding the blueprint for him and listening while he talks. The monk and nobleman have wisely chosen to help the carver do the best job he can, instead of trying to take over the project themselves.

As a rule, the Three of Pentacles is a good sign. It relates to skill, achievement, and the completion of a goal.

While this “success” energy isn’t quite as profound as it is in the Ten of Pentacles, it’s still there.

If the Ace is the beginning of a journey, and Two is the planning stage, then this card is the first small accomplishment on the road to success. It’s the building of a solid, successful foundation for the rest of your plans.

When reversed, the Three of Pentacles becomes its own opposite. After all, an upside-down archway doesn’t do anyone much good! It indicates sloppy work, shaky foundations, a lack of skill, and distraction.

You may feel overwhelmed right now, but a significant part of that feeling may come from failing to direct your energy to learning how to do better.

Sometimes, you can’t simply rely on your natural gifts to carry you — you need to actively work to hone your skills. This is one of those times.

The suit of Pentacles generally relates to practical matters in love readings. This card can signify building the foundations of a solid relationship, or even taking on a physical project with one’s partner.

It’s still a good omen, but most likely relates to saving up a nest egg, remodeling a house, or taking on a hobby as a team. These things will help keep your relationship stable and harmonious.

If you’re single, then this card can represent meeting someone through work, school, or a hobby group.

Have you ever heard the phrase, “too many cooks spoil the broth?” That’s what the Three of Pentacles reversed points to in a love reading.

When upright, the monk and nobleman know their place and don’t interfere. When reversed, a third party may be trying to butt in where they aren’t welcome, causing friction between you and your partner. This is likely to relate to money or practical matters.

Even if there isn’t a third wheel interfering here, this card can signify not putting in the effort to build a solid foundation. Someone may be expecting the other partner to put all of the effort into the relationship.

If you’re single, the Three of Pentacles reversed can indicate that you’re not really enthused about dating. You may ne subconsciously self-sabotaging because this isn’t really something you want to do — in other words, you’re not putting all of your social skills into this endeavor.

You may also be repeating mistakes from your past relationships, or stubbornly refusing to learn new ways of relating to people.

In a career and business reading, the Three of Pentacles is a great card to get. You may be feeling appreciated at work, with others recognizing your skills and work ethic.

Your superiors may have come to trust you to the point where they don’t interfere with your projects. You may also be in the midst of gaining new skills, knowledge, or certifications in order to do your job better.

In some cases, it can represent a collaborative effort. Each figure in this card has their own set of experience and skills. The monk understands the symbolism of the carving, the nobleman funds the carving, and the stoneworker brings their vision to life. When you work together and respect everyone’s abilities, great things can happen.

As a financial card, the Three of Pentacles can indicate that your hard work is paying off. You’ve put time into learning how to manage your money, and you’re reaping the benefits.

When reversed, the Three of Pentacles indicates sloppy work or a lack of skill (and a lack of interest in acquiring those necessary skills).

You might be frustrated that your efforts aren’t being recognized, which is negatively impacting your work ethic and level of dedication. The trouble here is that you have everything you need in order to succeed, you just have to make yourself put in the work.

If you’re involved in a team effort, it may not go well. Some members may not be willing to pull their weight, while others can’t seem to stop taking on responsibilities that they aren’t qualified for.

Financially, this card represents the need for hard work. If you’ve been hoping to win the lottery, get an inheritance, or benefit from some other windfall, it’s time to make a contingency plan. There’s no substitute for frugality, saving, and working hard here.

Three of Pentacles: Yes or No?

In a one-card “Yes or No” reading, the Three of Pentacles upright indicates a “Yes.” This card is a positive omen of teamwork, industriousness, and creating good things. You’ll most likely have the outcome that you desire.

When reversed, the Three of Pentacles is either a “No,” or a “Yes” with some very negative connotations. If you do get the outcome that you want, you’re likely to experience a lot of trouble with it — especially as it relates to friends and co-workers.

The suit of Pentacles is all about things ruled by the element of Earth. It’s growth, skill, material wealth, practicality, and secure foundations. For the Three of Pentacles, that means gaining the necessary skills to do a good job and putting them into practice to the best of your ability.

No matter where it shows up in a reading, this card highlights the need for dedication, a solid work ethic, and a desire to learn.