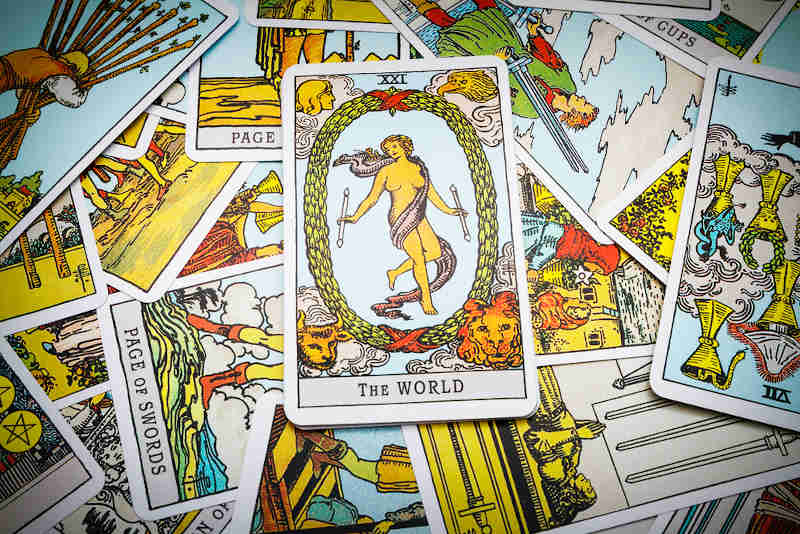 The World is another one of those tarot cards whose meaning can seem fairly opaque. Interestingly, many decks based on the Rider-Waite-Smith tarot don’t even include an image of the world at all!

Not all of its meaning is just in its visual symbols, either — this card’s position as the final card in the Major Arcana has a lot to do with its interpretation.

For the Rider-Waite-Smith tarot, Pamela Colman Smith portrayed The World as a naked woman holding two wands, dancing in mid-air. She’s adorned with a gray sash, and surrounded by a large wreath tied with red ribbon. Four creatures sit in the corners of the card — a man, an eagle, a lion, and a bull. (You might recognize them from The Wheel of Fortune card.)

The four creatures correspond to the four hayyot, or heavenly beings of Jewish lore. The prophet Ezekiel sees them in his vision of the heavenly chariot, and they also appear to John in the book of Revelation. These four creatures are also used as representations of the Four Evangelists — Matthew, Mark, Luke, and John — in Christian art.

According to some sources, the four creatures also represent the four fixed signs of astrology. The lion represents Leo, the fixed Fire sign. The eagle is Scorpio, the fixed Water sign. The man is Aquarius, an Air sign, and the bull is Taurus, an Earth sign.

The wreath encircling the dancing woman cements this card’s meaning as a position in a cycle. The cycle itself is less pronounced than it is in The Wheel of Fortune, but no less present.

Since The World is the final card in the Major Arcana, it represents culmination, completion, success, and travel. It’s the final pause in this cycle of life before everything begins once again with The Fool.

When The World appears in a general reading, it’s a wonderful omen of achievement and opportunity. You’ve learned the lessons and endured the struggles of the rest of the Major Arcana, and have come out wiser and stronger for it.

Your efforts are paying off, and the world is open to you. You may even choose to travel and further broaden your horizons.

The World isn’t the end, however. It’s the success of a long-term project, and a sign to celebrate, but it’s just a little acknowledgement of the completion of one cycle before the next begins.

If The World upright means success, achievement, and movement (either literally or figuratively), The World reversed is stagnation and inertia.

You may not yet have had all of the experiences you need in order to reach the culmination of this cycle of life, or you might be resisting change out of fear.

You may be investing your energy into things that are not helping you progress, or are ultimately unfulfilling for you. Even if you have a lot of achievements to your name, what good are they if you feel nothing when you look back on them?

It’s time to engage in some introspection and determine where you should be allocating your time and energy.

In a love reading, The World can symbolize reaching a desired relationship milestone.

In any case, you’ve achieved what you set out to do in your relationship, and can move forward from this secure place.

If you’re single, then The World is a reminder of your freedom. You have the entire world available to you. You could seek out any kind of partner you desire, stay single, or do whatever you wish. The world’s your oyster!

When The World appears reversed in a love reading, it’s a sign that things have become stagnant.

You may feel that the passion and enthusiasm have gone out of your relationship, or that you’re investing a lot of yourself in a partnership that doesn’t seem to be going anywhere.

It’s time to consider whether you should be doing something differently, or if this is even the right relationship for you. Watering dead flowers won’t give you a rose garden.

If you’re single, then you might be struggling with your search for a partner. This could be because you’re having trouble moving past some emotional trauma, or simply because you’re frustrated that your efforts to find a lover don’t seem to be working.

The advice here is the same: Consider what you might need to do differently, because this approach isn’t working for you.

The World upright in a career and business context is one of the best omens you can get. It’s a sign that you’re reaching your goals, hitting the milestones you’ve set yourself, and have every reason to celebrate. Don’t forget to pay this success forward!

In some contexts, this card may represent travel. If you own your own business, you may be getting ready to expand to an international market.

Financially, The World shows that you’re experiencing prosperity and abundance right now. If you had a saving goal, you’ve probably reached it. Congratulations!

Don’t take this as a recommendation to spend or invest recklessly, however. Celebrate your achievements, but don’t stop doing the things that got you here.

When The World is reversed in a career and business reading, it’s a sign that you’re not where you’d hoped you’d be by now.

You’re putting in the work, but somehow not achieving your goals. There are a lot of reasons for this. It’s possible that you’re not in a good career for you, or even that you’re self-sabotaging out of fear. Check the cards around The World for help placing it into context.

When it comes to money, The World reversed is stagnation. You’re not bringing in as much as you’d like, but you’re not spending excessively either.

Your finances are probably stable, but your savings isn’t growing and you’re not hitting your goals. Even though it might be tempting, avoid investing in high-risk ventures right now.

The World: Yes or No?

The World card indicates success, achievement, and completion. It’s a time to take a break and bask in what you’ve accomplished, before preparing for the next stage of your life. In “Yes or No” readings, it’s a strong “Yes” — your situation will turn out for your benefit.

When reversed, The World is a “No.” It takes on the opposite of its upright meaning, and instead indicates stagnation, inertia, and disappointment. Things probably aren’t going to work out the way you hope, unfortunately. If you’re wondering whether or not you should proceed with a decision, you most likely shouldn’t.

When The World appears, the world is at your feet. You’re crushing your goals, achieving your dreams, and every door seems open to you.

Even if it’s reversed, the potential is still there — you just need to examine what’s keeping you from reaching it.