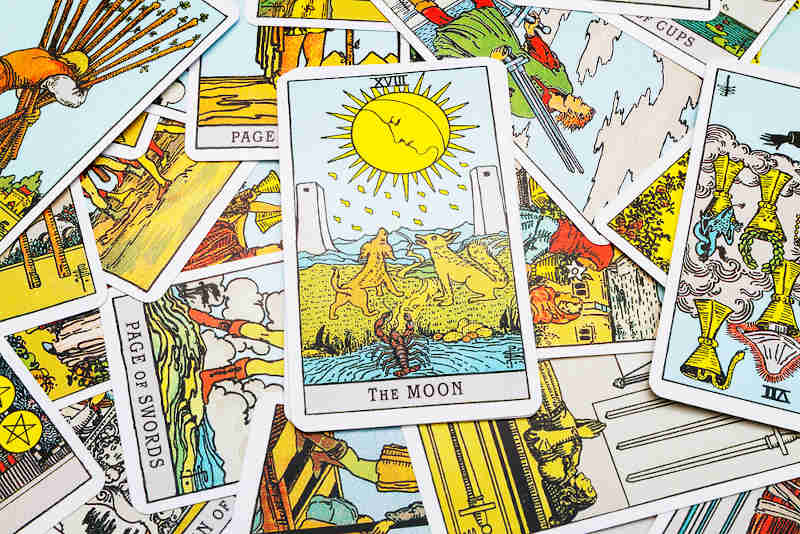 The Moon is one of three celestial bodies represented in the Major Arcana, alongside The Sun and The Star.

Interestingly, their meanings aren’t related — while The Sun is typically read as joy and success, and The Star as hope and optimism, The Moon is typically given a more negative meaning. This is derived from the card’s imagery and symbolism.

Pamela Colman Smith’s illustration of The Moon for the Rider-Waite-Smith tarot echoes a lot of the symbolism found in the rest of the Major Arcana. Tiny drops of dew shaped like the Hebrew letter yod appear in the sky. There are mountains in the distance, and a pair of tall, gray pillars. The contrast between land and water is present as well.

The Moon itself is depicted as a human face in profile, within a yellow circle. The eyes are closed, and the brow seems furrowed. The overall expression appears tense. The Moon is surrounded by 32 rays of light — 16 large, and 16 smaller. The drops of yod-shaped dew are yellow, like the moonlight, and represent the fertility of the imagination.

Beneath the moon, a reddish dog and yellow wolf stare upward on either side of a thin, yellow path that winds up into the mountains. Between them, a crayfish emerges from the water in the foreground.

In the background, there are two pillars. As in other cards, these represent a kind of gateway. The mountains beyond are the same blue as the sky, representing the potential challenges and mysteries of the world beyond the gate.

According to A.E. Waite, this card speaks to humanity’s “animal nature.” Its imagery represents the imagination, and the presence of the dog and wolf stand for the deep-seated, animalistic fears we all hold. The intellect is compared to the reflected light of the moon, incapable of shining on the mysterious mountains beyond the gate.

When The Moon appears upright, something’s off. Not everything is as it appears, and you may be falling prey to illusions.

You can try to reason your way through this, but, as A.E. Waite said, “intellectual light is a reflection and beyond it is the unknown mystery which it cannot reveal.”

You may wish to pay more attention to your dreams, gut feelings, and other intuitive messages to help you find your way.

The Moon can also represent anxiety. It’s important to recognize when feelings of fear are a message from intuition, or the result of an illusion.

Should The Moon appear reversed, it can indicate that some of the illusions surrounding you are starting to dissipate. You may now be able to see through some of the falsehoods and confusion, and any anxiety you feel might begin to calm.

It’s both a good and bad omen. While it’s infinitely better to be able to see through illusions than continue to be fooled by them, exposing lies is rarely a pleasant ordeal.

Even if you don’t enjoy the circumstances that you’re in, appreciate your newfound clarity. Trust that whatever you’re going through now is for your highest good.

If The Moon shows up in a love reading, it’s a sign to pay close attention to your feelings. You might be experiencing some uncertainty, and that’s important.

There could be a lot of miscommunications, or even outright deception and gaslighting. Even if everything seems good on the surface, things aren’t always as they appear.

Look at the mountains in the background of the card. You can see their shapes, but The Moon’s light doesn’t fall on them. There’s no way of knowing what they’re really like unless you’re actually in them.

What are you seeing within your relationship that’s causing feelings of doubt? What can you do to bring clarity to the matter?

If you’re single, The Moon may signify someone who’s duplicitous. Be careful not to jump too quickly into a relationship.

When The Moon reversed turns up in a love reading, it can represent broken illusions. Lies may be exposed and secrets revealed. It can also represent your acknowledgement of the true state of your relationship — did you and your partner have different ideas about your partnership?

It’s possible that you may have developed a different vision for your relationship than your partner did. You might even have turned a blind eye to your partner’s true nature. In any case, you’re starting to see clearly now and can use this information to help yourself.

If you’re single, The Moon reversed can signify a period of clarity.

Note that The Moon reversed can be a double-edged sword. In some cases, it symbolizes situations where you’re beginning to see the truth, but choosing to remain willfully ignorant.

In a career or business meaning, The Moon is uncertainty and anxiety. You might feel that your job isn’t very stable, and be worried about what you’ll do if you lose it. You might work in a toxic environment.

You might even be dealing with a lot of miscommunications or gaslighting by your co-workers or managers. Something is concealing information from you. If you aren’t sure how to find it, give yourself time for the truth to come to light.

In a money reading, The Moon indicates that you might be misinformed. Avoid making any major purchases or big financial decisions, since it’s very likely that you don’t have the full picture just yet.

When The Moon shows up reversed in a career or business reading, it hints at a return to stability. Some of the insecurity and anxiety you may have felt is starting to subside. Communications become clearer, and you’re able to make better decisions about your future.

Financially, The Moon represents lies exposed. You’re getting more information about where you should and shouldn’t be putting your money — you might even discover that a venture you were thinking of investing in wasn’t on the up-and-up.

It’s likely that information is still coming to light, so avoid making any major decisions until you know everything you need to know.

The Moon: Yes or No?

The Moon is intentionally confusing. It’s a card of illusion and deception. You may feel secure that you’ll get what you want, but, in a “Yes or No” reading, The Moon is a firm “No.” There are many factors which you can’t see, or may be intentionally deceiving yourself about.

If The Moon is reversed, things look a bit better. This card can be a “Yes,” since it indicates that illusions are starting to evaporate and you’re making more informed choices. If you’re asking whether to make a choice you’ve been considering, this is a sign to do so. If you want to know whether you’ll get an outcome you’ve been hoping for, it looks likely.

While The Sun and The Star are good omens, The Moon is a very mixed bag. It’s a valuable card, because it shows us when we’ve been deceived (or are choosing to deceive ourselves).

Of course, nobody likes discovering that they may have been lied to. Whenever The Moon appears, pay close attention to it. Its message is rarely pleasant, but it can be a lifesaver.