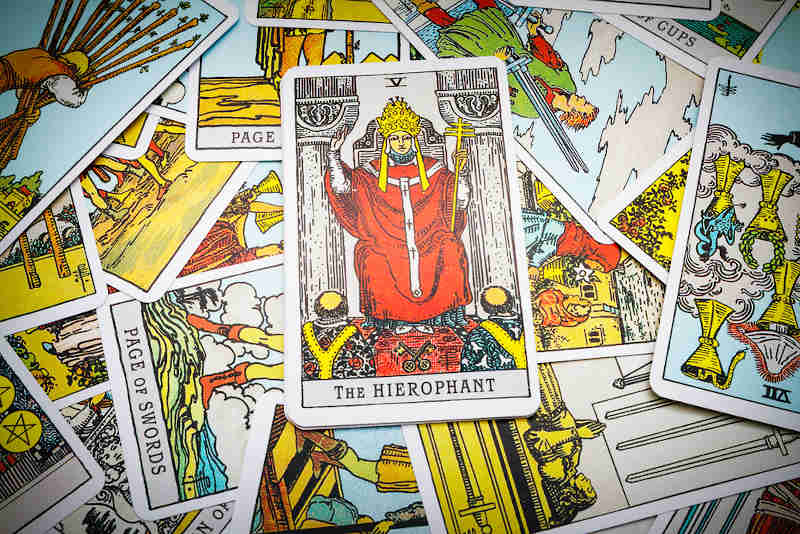 The Rider-Waite-Smith tarot represents The Hierophant as a red-robed man sitting on a throne. He has three crowns stacked on his head and holds a golden staff with a triple cross. His throne is positioned between two gray pillars, and there is an emblem of two crossed keys at its base.

The High Priestess is the keeper of spiritual mysteries, and The Hierophant is the maintainer of spiritual law. The pairs of pillars on both of these cards represent a doorway, and the seated central figure is the gatekeeper.

The Hierophant’s hand gesture is recognizable as “as above, so below.” He is demonstrating his authority over both the spiritual world and the mundane. It also positions him directly between the realms of Heaven and Earth, as a bridge.

The crossed keys, while a minor detail, are also deeply symbolic. They are the keys of the inner and outer realms, and the secular and the divine. These are two paths, neither more important than the other, which must be kept in balance.

When upright, The Hierophant advocates you to return to tradition and embrace convention.

He may appear as a signifier for someone (usually either male or very masculine) who provides spiritual guidance. This may be a priest, rabbi, imam, spiritual counselor, or other religious authority.

No matter the context of the reading, The Hierophant advises that you avoid disrupting things right now. There’s no need to reinvent the wheel — your best bet is to stick to what has worked for others in the past. Allow traditions to guide you.

When The Hierophant appears reversed, it’s time to break away from tradition. You might be feeling restricted right now, and this card is a sign that you need to step out of that cage.

It’s time to question what you’ve been taught. Understand that simply because something is “the way it’s always been done,” that doesn’t make it good, correct, or efficient.

In a love reading, The Hierophant upright indicates traditional love, romantic milestones, and the like.

If you’re in a relationship, you can expect it to progress in a very conventional fashion for the foreseeable future. If you aren’t, you may find yourself drawn to a very traditional partner.

In some cases, this card may indicate a marriage ceremony.

The Hierophant reversed generally isn’t a very good omen for established relationships. It can indicate that things have become very boring and “same-y,” or that you and your partner don’t have the same vision for the future.

In some contexts, it may signify a reversal of tradition — either traditional relationship milestones or gender roles. This isn’t a bad thing, but is worth exploring to see if this reversal aligns with what you and your partner want from your relationship.

If you aren’t in a relationship, The Hierophant can symbolize an unconventional, or even rebellious, potential partner. You might meet them in an unusual way, and not meet traditional relationship milestones.

No matter whether you’re in a relationship or not, The Hierophant reversed can indicate that you shouldn’t trust all of the romantic advice that you’re given. What has worked for others in the past may not be of use to you.

In a career or business reading, The Hierophant discourages rocking the boat or thinking outside of the box.

You’re likely to get good results from working with a group, especially if you’re in a teaching, mentoring, or other advisory position. This card may also appear as a signifier for a supervisor who acts as a helpful mentor.

In a money reading, this car advises against any “get rich quick” schemes or other unconventional ways of making money.

Instead, you should save up and invest your money in low-risk prospects at this time. It’s not a good idea to take a gamble on high-risk ventures just yet.

In a career or business reading, The Hierophant reversed often shows up when an owner or supervisor is behaving in an authoritarian fashion.

They may seem to want things done a certain way “just because,” even if they don’t have any experience performing the job they’re imposing rules on. You can’t always expect the people in charge to know the best way of getting things done.

You may also find yourself in a group project that puts pressure on you to conform. You might feel that your ideas aren’t being heard, or that you’re forced to follow along with prevailing methods and opinions.

This card also advocates caution when spending and investing your money. You may be attracted to novel ways of earning money right now, but you need to avoid investing money that you aren’t willing to lose.

The Hierophant: Yes or No?

The Hierophant is better at offering advice and support rather than a definitive answer. In a “Yes or No” reading, he’s a “Maybe.”

If your query revolves around bucking the norm, then the answer will likely be more negative. If it involves tradition, then it will be more positive. Look to The Hierophant’s general meaning for more information, or explore your situation from a different angle.

When reversed, The Hierophant says “No.” Your decision or situation is not likely to pan out at this point in time. You may wish to take some time to reflect on the matter before choosing to proceed, or ask again when the situation has matured more.

The Hierophant is a traditional figure of religious authority. He stands for convention and rules. When he appears, he advises you to avoid the road less traveled. You’re more likely to find success by doing what has worked for other people in your position.

When he’s reversed, he suggests taking a careful look at how well traditions and conventions are currently serving you. While The Hierophant is a strict figure, he’s also a wise and compassionate mentor.