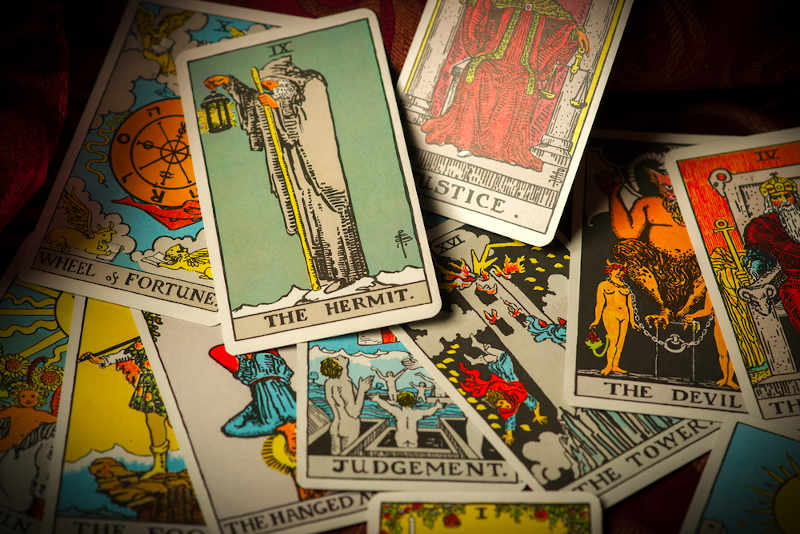 Have you ever met someone who enjoyed being alone, but never felt lonely? Maybe you’re the kind of person who needs their solitude to recuperate and heal, and withdrawing to introspect is what restores you.

If so, you’ve experienced the energy of The Hermit, the ninth card of the Major Arcana.

In the Rider-Waite-Smith tarot deck, The Hermit is portrayed as an old man. He wears a hooded gray cloak, and holds a tall staff in one hand, and a lantern lit by a six-pointed star in the other. There is nothing in the background — the only things other than the man himself are the blue-gray sky and the stony path he walks on.

The Hermit’s gaze is cast downward, and his hood blocks his view of what’s around him. He’s focused on his path. The lantern and staff serve to guide him on his way.

The Hermit has nothing outside of what he needs to complete his journey. His clothing is unadorned, and even the landscape is barren. He has withdrawn from everything but what he needs in order to grow and advance.

It’s important to note that there’s a reason why there’s nothing in the background of this card. There’s nothing else there, because all that surrounds him is the sky.

The Hermit stands at a mountain peak. It’s the pinnacle of understanding, representing his level of spiritual knowledge. His journey is long and perilous, but he has attained wisdom that he can bring back with him.

In a general reading, The Hermit represents a period of introspection and soul-searching. He stands for distancing yourself from external factors in order to listen to your “inner voice.”

This can involve doing some shadow work — when you take a long look at yourself, it’s highly likely that you’ll see things you don’t like. This is a time to work on resolving and integrating those aspects of the self.

You might be drawn to the idea of being alone for a time. This can allow you to learn, heal, and grow. It’s a chance to focus on meeting your own needs.

When reversed, The Hermit represents the desire to withdraw and be alone. However, while he stands for a healing period of solitude in his upright orientation, reversal indicates that this time alone might do more harm than good. You might be withdrawing too much, and developing reclusive or anti-social tendencies.

At some point, you need to come out of your shell and reconnect with the outer world again.

In other contexts, The Hermit may indicate that you’re avoiding self-reflection. It’s possible that you fear what you might find there. You won’t be able to hide from yourself forever, though — eventually, the time will come when you need to do some shadow work.

When upright, The Hermit suggests that it’s a good opportunity to take some time to learn about yourself before entering a relationship. If you’ve recently left one, it can be very tempting to enter into a “rebound” partnership. This won’t be helpful — it can actually be very damaging to everyone involved.

This card may also represent celibacy, a connection with a wise partner, or a need for soul-searching within a relationship. This can be something you do together, or on your own.

The Hermit reversed is generally not a positive omen in love and relationships. If you’re with someone, this card can indicate feeling isolated, or even the desire to be by yourself for a time.

In a relationship, one partner may seem to be distant, or drifting away from the other. In a similar vein, one partner may be trying to keep the relationship alive, while the other has already checked out. It’s time to take an honest, objective view of the partnership, and see if it’s worth sustaining.

If you’re single, then The Hermit reversed can represent the fear of missing the opportunity to be with someone.

In a career and business context, The Hermit upright indicates that you may have blinders on. It’s possible that you’re focusing too heavily on the pursuit of your career goals and closing yourself off to other opportunities for growth or fulfillment.

Alternatively, you may realize this and be experiencing a bit of a crisis — should you stay in your career, or pursue something more fulfilling? Is money enough of a motivator to continue following the path you’re on?

In a money reading, The Hermit upright advises you to approach your finances with a mature mindset. It’s not the time for schemes or impulse buys. Look to your future, and put your money where it will be of the most use to you, those around you, and the world.

You may also be coming to the realization that money isn’t bringing you the happiness you thought it might. It could be a good time to dedicate your extra cash to environmental or humanitarian causes.

When reversed, The Hermit advises you to come out of a period of solitude and rejoin the business world. You may have been working alone for a long time, or even have withdrawn from work entirely to focus on self-development. It’s time to come back.

Connect with co-workers, network, and do what you need to do to realign yourself with that collaborative energy.

As far as money is concerned, you may have been evaluating your relationship with money, and are now ready to re-engage with buying, selling, and investing. It’s a good idea to ask for the advice of someone older, wiser, and more experienced, and avoid making any high-risk decisions.

The Hermit: Yes or No?

The Hermit is a neutral card. He is more indicative of a process than a conclusion. As a result, he represents a “Maybe” in “Yes or No” readings. The outcome isn’t yet determined — things are still up in the air.

Reversed, The Hermit’s answer may depend on your question. He can be a “Yes” for questions that relate to self-reflection, but a “No” for ones that relate to connecting with others. Remember, this card is about facing things alone.

The Hermit is a powerful figure. He doesn’t need anything but his lantern, his staff, and the path he walks on. He is complete unto himself — he knows his own mind, and this has given him wisdom and inner peace.

When he appears, he describes the times in our lives when we need to withdraw to find these things within ourselves. Since he represents introspection, he doesn’t often show up in love or money readings. When he does, it’s important to heed his advice.