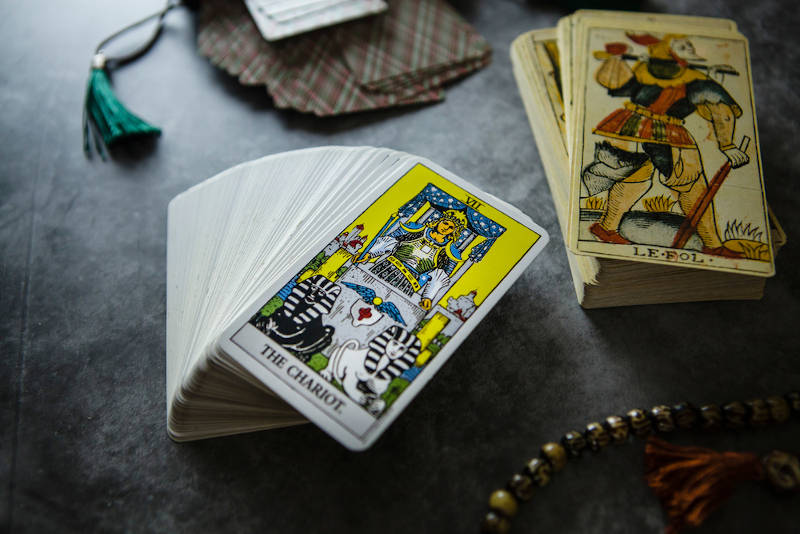 What comes to mind when you imagine a chariot? Chances are, it’s a chariot race, or an Egyptian warrior going into battle. For most people, chariots mean one thing: entering a dangerous challenge. When it comes to tarot, that symbolism isn’t too far off.

The Chariot is the seventh card of the major arcana. The Rider-Waite-Smith tarot depicts this as an armored figure with a starry crown standing in a chariot.

Above, the chariot has a blue and white canopy covered in stars. The figure himself holds a wand in one hand. His other hand is empty — even though he has no reins to control his animals, he shows no fear.

The front of the chariot is adorned with a pair of wings and an image of a mallet. The vehicle itself is pulled by a pair of sphynxes: one black, one white. In the background, the towers of a castle rise in the distance.

The images in this card were chosen very deliberately. The castle is in the background, and the chariot is moving away from it. If the walls and towers represent safety and comfort, then the figure in the chariot is charging into the (potentially dangerous) unknown.

The star motif hearkens back to The Star, which represents hope. Coupled with the moon-shaped epaulettes on the charioteer’s armor, it shows the celestial influences over his journey.

The charioteer’s left hand is empty, he has no reins. This means that he has no means of slowing the sphynxes down or telling them where to go — there’s no way for him to control where he’s going.

The pair of sphynxes symbolize two opposing forces. While they’re hooked to the same chariot, their color scheme and lack of reins indicate that they will pull the charioteer wherever they please.

The mallet on the chariot’s coat of arms is said to symbolize self-control. While the charioteer’s journey is dictated by celestial forces and the pair of reinless sphynxes before him, he has full control over his reaction to what he encounters. Even if he can’t control his speed or direction, he has prepared himself for the journey and he alone governs how he responds to it.

When upright, The Chariot represents triumph. The charioteer faces many obstacles, but he manages to overcome them through self-control and a sheer force of will.

It’s generally a very good omen, though it does come with a few caveats. It represents success, but only after a struggle. You’re likely to feel very confident and motivated at this time, which is good.

You’ll need these feelings to help carry you through what you’re about to experience. As long as you can maintain control, you’ll be able to overcome the obstacles in your path. Make a plan, stick to it, and trust it to carry you through.

In some situations, this card may also represent travel, particularly by car, bus, or train.

Now, instead of responding to what he encounters, he reacts. You may be feeling sensitive or defensive at this time, or as though you’re an observer to your own life. You may lack willpower, drive, or focus. You might also feel aggressive as a result.

This card advises you not to be a silent passenger here. It’s time for you to take stock of the opposing forces in your life and do what you need to in order to master your response to them.

You can’t control what fate has in store for you, but you need to control what you do with it. It’s time to take back your life.

In a love context, The Chariot upright can indicate that things may have gotten away from you. You might be feeling a lot of strong emotions at this time, and aren’t sure how to handle them. It’s only by keeping a rein on yourself that you’ll be able to overcome the challenges in your love life.

Think of it like this. If you and your partner are arguing, you may feel anger and want to lash out. Will lashing out help the situation, or is it better to keep a rein on those feelings so you can communicate calmly and effectively to resolve the issue?

Many couples lash out and apologize to each other afterward, but an apology doesn’t erase the harm that was done. The Chariot advises you to keep calm and maintain your focus.

If you’re single, then this advice still applies. You might have dated whoever came along in the past, but this isn’t a good way to find the best partner for you.

Your experiences in doing this may even have left you feeling jaded and exhausted by the idea of dating. You need to take stock of what you want from a relationship and pursue it. It’s only through willpower, ambition, and self-control that you will get what you want.

When The Chariot appears reversed, the sphynxes are going full tilt. They’re charging ahead, and all the charioteer can do is desperately cling to his chariot. This isn’t a great state of affairs for anyone involved!

If you’re with someone, things may be moving at a pace that you’re not comfortable with. This can be either too fast, or too slow.

You have to find a balance between two opposing forces here: Your relationship timeline, and your partner’s. Forcing either of you to move faster or slower than you desire won’t be healthy for you.

If you’re single, your desire to find love might be taking over your life. You may be focusing on this to the exclusion of other things — like work or hobbies.

While you can’t control your feelings, you can control what they push you to do. Regain your life balance, and you’ll have an easier time meeting new people.

The Chariot is great news for a career or business reading. You have a lot of ambition, and that’ll enable you to go far. If you can keep your nose to the grindstone, you’ll succeed. Stay focused, ignore petty work drama, and there’ll be no stopping you.

In some contexts, it may represent business trips or other work-related travel, especially by land.

Financially, The Chariot often appears when you’re facing some money-related obstacles. This is the energy you need in order to overcome them, so take advantage of it.

When The Chariot shows up reversed in a career or business reading, it hints that your ambitions may be getting the best of you. You’re likely forging ahead without a clear plan, hoping everything will fall into place.

While this certainly can happen, it’s more likely that you’ll end up wasting your effort and energy. Create a solid plan, and act on it. There is a middle ground between relentlessly charging ahead and waiting for success to fall into your lap.

When it comes to money, be wary of rushing into anything. It’s very likely that there are some factors that you didn’t consider, which can make or break your investment.

If you’re acting out of an abundance of caution, it might be time to relax. Again, there’s a middle ground between rushing ahead and being paralyzed by indecision.

The Chariot: Yes or No?

The Chariot indicates success. In a “Yes or No” reading, it’s a pretty safe bet that it means “Yes.” As long as you’re prepared to fight for the outcome you want, it will be yours.

Reversed, The Chariot is still regarded as a “Yes,” just a less definite or positive one. You’re likely to encounter struggles, and the outcome you desire is likely to come much later than you’d like.

The Chariot is a fascinating card. It represents the perfect embodiment of willpower in the face of challenges and obstacles, and cautions the querent to find a middle ground between all of the opposing forces around them.

When you can boldly charge ahead while maintaining self-control, you can accomplish anything.