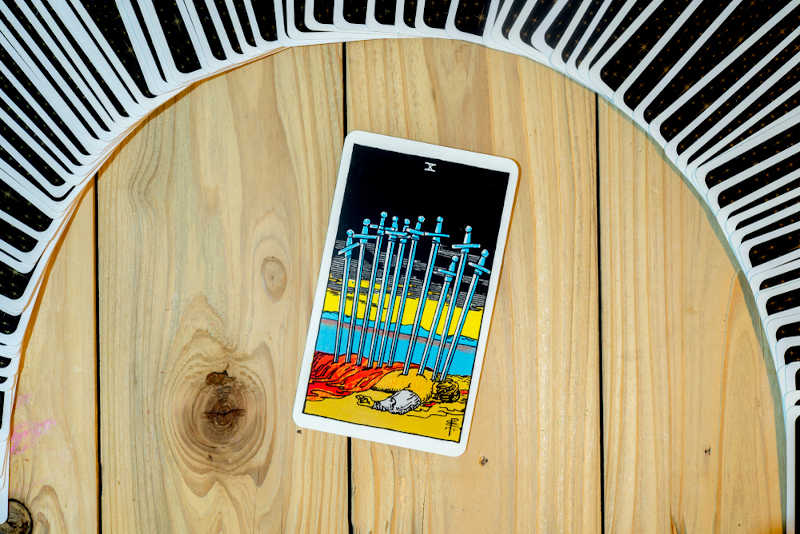 In the Minor Arcana, Tens are very heavy, high-energy cards. They represent the ultimate culmination of each of the suits. If you read the suit of Swords as a story, for example, then the Ten of Swords is how the story ends.

Unfortunately for this particular suit, it’s not a very happy ending.

About Ten of Swords

The Ten of Swords isn’t what you’d call subtle. In the Rider-Waite-Smith deck (and other decks inspired by it), its imagery is unmistakable and hard to misinterpret.

This card’s central image is a corpse. It’s a person, probably a man, laying face-down on the ground. Judging by the position of the figure’s arms and the ten swords sticking out of their back, this isn’t voluntary on their part. A red cloth, possibly a flag, covers their lower body.

The background isn’t much better. The sky is almost completely black, save for a thin band of yellow at the horizon. In the distance, you can see gray mountains. Mountains typically represent some kind of struggle or obstacle.

This isn’t to suggest that this card is completely devoid of hope. The yellow sky can be interpreted as a sunrise, which suggests that this extremely difficult, oppressive situation will pass soon.

In a general spread, the Ten of Swords often represents backstabbing. Slander, gossip, and betrayal are all indicated here. It can also point to failure, collapse, and hitting your personal “rock bottom.”

Fortunately, this will not be a permanent state. Like the golden dawn on the horizon, better times will come soon.

Sometimes, this card may signify a person who is attention-seeking, melodramatic, or tends to play the martyr.

If the Ten of Swords is reversed, it indicates being saved from disaster at the last possible minute. (In extreme cases, it may even represent a brush with death.) Something terrible was going to happen, but something has intervened to save you.

Alternately, this card can represent serious problems that continue for a long time. Instead of representing the dawn, the yellow sky represents a sunset. Strap in for a long, cold, dark night.

The Ten of Swords isn’t a good omen to get in any situation, but it can be especially ruinous for love and relationship readings.

At best, it may point to arguments, potentially even a breakup or divorce. At worst, it can represent being betrayed or abused by your partner, or that you and your partner are facing some kind of ruin.

If you’re dealing with an abuser or manipulator, it’s time to make an escape plan — your safety may be at stake.

This card might also appear when one partner is being dramatic in order to get the other’s attention. Even though this might seem like a less serious interpretation, consider this: If the relationship was stable and healthy, would you or your partner feel the need to resort to this?

For single people, this card can represent catastrophes that keep you from trying to find a partner. Chances are, you have too much on your plate right now. It can also indicate the lingering emotional harm from a previous relationship.

The Ten of Swords reversed is a tough card to get in a love reading. Much of its interpretation depends on context, so you may want to look at the surrounding cards for more information.

On one hand, this card can represent saving your relationship from the brink of failure. On the other, it can also indicate a total collapse without any hope of reconciliation.

It’s a particularly dangerous card for people in abusive situations. It can represent an end to the abuse, or a violent escalation. In either case, if your partner is abusive, is it really a good idea to trust them and hope for the best?

The interpretation is similar for single people. This card can represent moving past the pain caused by an old relationship, or succumbing to it. It may be a good idea to seek professional help to heal from this situation, so you can enjoy healthier relationships in the future.

The Ten of Swords isn’t a good sign for careers and business. For you, personally, it may represent reaching the limit of your abilities in your current job. It also often heralds being fired or laid off.

For a company, it can represent bankruptcy, failure, or serious legal trouble. You might also have to deal with betrayals from your superiors or co-workers. Either way, it’s a good idea to formulate an exit plan when this card shows up.

For money readings, the Ten of Swords isn’t any better. It can indicate serious losses, bankruptcy, or expensive legal trouble. If you’re involved in any underhanded dealings with other people, they may betray you.

Be very careful who you deal with, and avoid investing in anything risky right now.

When it comes to careers and business, the Ten of Swords can represent quitting a job that was harming you, or getting out of a toxic work environment. On the flip side, it can also indicate that you’re under an extreme amount of stress, and on the verge of collapse.

If this card appears in your spread, it’s time to take very careful inventory of your situation.

Financially, the Ten of Swords can symbolize either total financial ruin, or just barely making it by the skin of your teeth.

Ten of Swords: Yes or No?

The Ten of Swords is hard to get in a “Yes or No” reading. Even without knowing any of the meanings attached to the Ten of Swords, an image of a person dying a bloody death generally doesn’t come with good news attached. Whatever outcome you seek, you won’t find it here. This card is a very firm “No.”

Reversed, the Ten of Swords is still a “No.” This is one of the tarot’s most overwhelmingly negative cards — it can even indicate a brush with death. No matter whether it appears upright or reversed, it indicates that you aren’t going to get what you from this situation.

The Ten of Swords is a tough card to see. It offers some hope, but not much. In every interpretation, it points to immense strain and serious difficulties — the only difference is in how long they last.

In an advice position, this card tells us to let go of the past and look to the future. No situation, no matter how bad, can last forever.