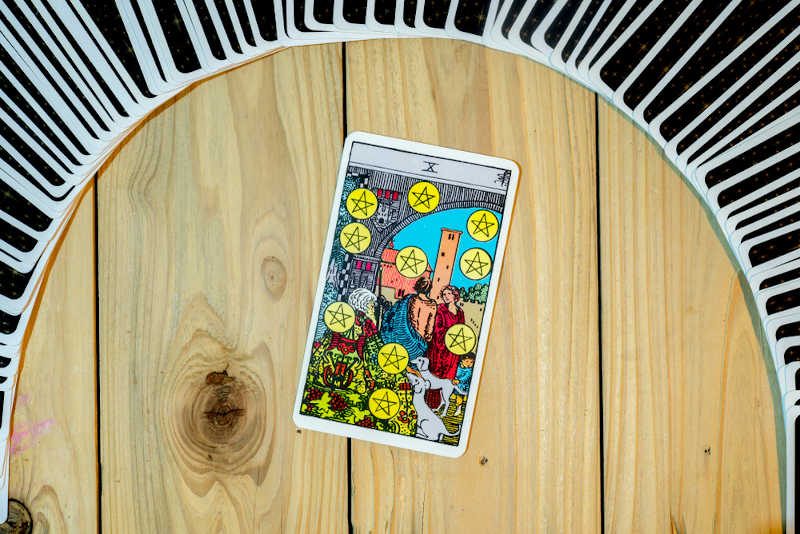 The pips cards of the Minor Arcana run from the Aces to the Tens. If you view each of the suits as its own story, the Aces are the beginnings, and the Tens are the endings.

The suit of Pentacles deals with prosperity, abundance, the physical world, and all things associated with the element of Earth. Its story has a happy ending, too, that tells about riches, inheritance, and financial comfort.

About Ten of Pentacles

The Ten of Pentacles is a complex card. Like some others in the Rider-Waite-Smith tarot, it relies on a knowledge of esoteric symbols to tease out its many meanings.

At first blush, we see a scene of an old man sitting in what appears to be a finely appointed room of some sort. He’s wearing a robe or cloak adorned with complex imagery, including grapevines, fruit, and flowers. Two dogs stand at his knee, and they seem relaxed and happy.

Three figures stand in the doorway in front of the man. One, a younger man, seems to be some kind of guard or soldier. His back is to the viewer, and he holds a spear in one hand. Beside him, there’s a young woman. Based on her pose and expression, she seems to be talking to the young man.

A child stands to her left, with one chubby hand on the tail of one of the dogs. Whoever these people are, they seem to be familiar to the old man — neither of the dogs are attempting to guard him or seem wary in any way, and the young man with the spear isn’t trying to fend them off.

Ten pentacles sit superimposed over the scene. They’re arranged in the shape of the Tree of Life recognized in a variety of mystical traditions. This gives it an added meaning of tradition and earned wisdom, as well as setting down metaphorical roots.

In general, the Ten of Pentacles deals with permanence, your legacy, inheritance, ancestry, and generational wealth. It describes an established family, with traditions long-term security, and stable foundations.

When it appears, you’re likely in a harmonious, comfortable, stable phase of your life. Since this card deals heavily with family, you may be benefiting from family support at this time.

Even if you aren’t particularly close with your blood relatives, the Ten of Pentacles upright may still refer to support from your found family, or being bolstered by a sense of tradition and legacy.

When the Ten of Pentacles appears in its reversed orientation, it takes on the opposite of its usual meaning. Instead of tradition, it becomes unconventionality. Instead of stability, it represents insecurity.

Whether or not this is a positive omen is up to you — if you want to break the mold and get away from the norm, then it could be a good sign. If you’re trying to build a lasting legacy and a secure future, it may not.

Look at this card’s positioning in the spread, as well as the cards around it, in order to get more context.

When it comes to love and relationship spreads, the Ten of Pentacles is a great omen for anyone looking to grow their family or create long-term stability and security for themselves or their loved ones.

If you’re just dating right now, it may signify moving through traditional romantic milestones — engagement, marriage, and children. It can also represent buying a house, setting up a homestead, creating a will, or building a long-term investment portfolio.

In general, this is a card of successful growth and deep roots.

If you’re single, then this card can be an omen of a traditional partner. Your next romantic interest may be interested in a very conventional relationship. This is likely to be someone you can see yourself growing old with.

The Ten of Pentacles reversed can be a good or bad sign for love and relationship readings. It all depends on context and the nature of your partnership. On one hand, it can represent an unconventional relationship. On the other, it may indicate instability, a lack of long-term planning, or doubt.

You might find yourself wondering if you want to stay with your partner for the rest of your life, of if you’d be better off leaving. This card can also represent turning away from your family in order to focus on earning and saving money.

For single people, this card can hint that you’re not really looking for a serious, committed relationship. It can also indicate the appearance of a potential love interest with unconventional values and views.

For career and business readings, few cards are as good as the Ten of Pentacles. If you own your own business, then it’s a sign that you’re creating something that will last. If you work for someone else, it can represent working hard, creating a comfortable retirement for yourself, and still having time to enjoy your family.

Even if you’re a long way from retiring, the position you’re in is likely to be stable, comfortable, and prosperous.

In financial readings, the Ten of Pentacles indicates money windfalls and inheritances. It may also represent setting up a pension, establishing a long-term investment plan, or setting up a trust fund for your heirs. It’s a great card for people looking for financial stability.

When reversed, the Ten of Pentacles can be a bitter pill to swallow. Most people generally don’t want jobs that aren’t stable, and this is exactly what this card represents. This can range from bankruptcy, to legal trouble, to high employee turnover. You’re not likely to feel very comfortable or secure in your position right now.

This card can also indicate working in a non-traditional field. If this is the case for you, make sure that you’re still able to pay your bills and save for hard times.

For money readings, the Ten of Pentacles reversed isn’t a good omen. You might experience trouble with contested wills, difficulty collecting on insurance, or an unexpected financial loss.

Ten of Pentacles: Yes or No?

For a simple “Yes or No” reading, the Ten of Pentacles is usually a “Yes.” This card heralds stability, prosperity, and long-term success. It’s a card of comfort and harmony. You’re most likely going to receive the outcome that you’re hoping for here.

When the Ten of Pentacles is reversed, it’s a “No” — especially for anything involving money. In this orientation, the card represents disharmony and instability. It’s not a very good omen for getting what you want from your query.

The Ten of Pentacles is a very cozy card. Everything about it relates to a comfortable, stable life that lasts for generations. It’s all about putting down roots, providing for your loved ones, and creating a lasting legacy.