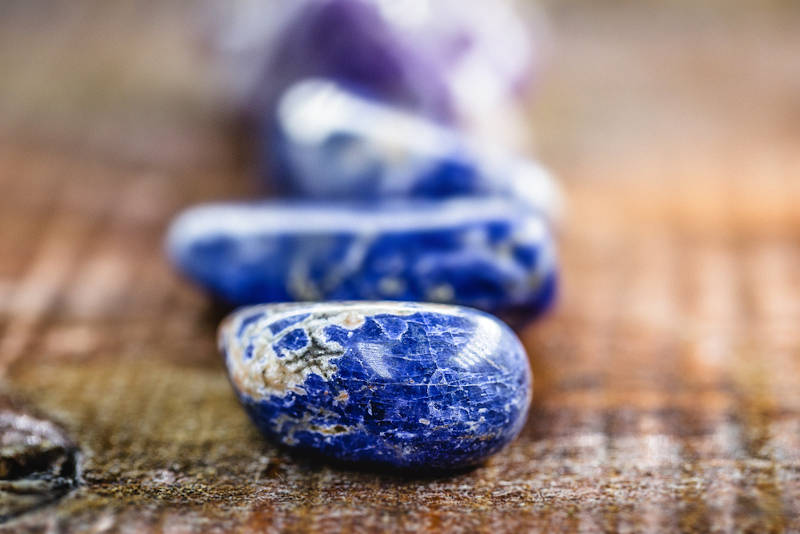 Sodalite is lapis lazuli’s often-overlooked cousin. It’s actually one of multiple minerals that makes up lapis lazuli, but often lighter in color and without glittering flecks of pyrite. Even if it’s not quite as popular as its more famous counterpart, sodalite is still an extremely valuable gemstone in healing and magic.

As small, individual crystals, sodalite is translucent. As larger masses, it appears opaque.

Some sodalite is considered hackmanite. This variety exhibits a characteristic called tenebrescence, which means that its color may change when exposed to light.

As an example, some hackmanite specimens are deep violet when freshly dug, but turn to greenish white in sunlight. Other specimens start out white, but turn violet. Interestingly, when removed from sunlight for a time, the color will begin to revert.

As an emotional healer, sodalite is similar to lapis lazuli. It’s considered a stone of truth, adept at uncovering secrets. It links the conscious and subconscious minds, allowing the user to view their hidden truths in an objective fashion. This makes it useful for processing trauma, fear, and phobias in a way that can help reduce anxiety.

Physically, sodalite is believed to relieve water retention, improve hydration, and cleanse the organs and lymphatic system. It’s also used for inflammatory conditions, particularly of the throat. According to some sources, it can also aid calcium deficiencies, symptoms of menopause, and digestive disorders.

Sodalite’s a fairly recent stone, having only received worldwide recognition in the 19th century. That mans that there isn’t a large body of magical lore, and most of what exists is pretty modern. Nonetheless, it’s often used by witches and other magic practitioners for emotional healing and wisdom.

As a stone of truth and objectivity, sodalite is also useful for dispelling illusions. If you feel that someone’s trying to pull the wool over your eyes — either magically or otherwise — wear or carry sodalite, or use a sodalite gem essence to see through them.

While closely tied to logic and objectivity, its ability to link the conscious and subconscious minds make it a helpful aid for developing intuition. It’s good at “connecting the dots” between logical and subconscious perception, and bringing intuitive observations to the surface where that information can be acted on.

Its powers of objectivity are also incredibly helpful for spells and rituals to release things that are no longer helpful. No matter whether they’re relationships, habits, or situations, sodalite can allow the user to see them for what they truly are, without the rose-colored glasses of emotional attachment.

This can allow them to release these things and move forward. Sodalite’s also good for meditating prior to cord cutting rituals. It can help users who recognize that etheric cords need to be cut, but aren’t yet fully emotionally prepared to do so.

For those who work with chakras, this stone is most closely tied to the throat chakra, Visuddha. This energy center rules communication. When it’s out of balance, it can lead to difficulty speaking up and standing up for oneself. Wearing or meditating with sodalite near the throat can help unblock it, allowing for the easy flow of energy into and beyond this chakra.

How to Cleanse Sodalite

Sodalite is slightly softer than quartz, at a 5.5-6 on the Mohs scale of hardness. It’s still a fairly durable stone that can withstand a variety of cleansing methods. Choose the one that resonates the most with you and your individual stone.

Some methods for cleansing Sodalite include:

Some sources suggest that sodalite benefits most by cleansing with moonlight. To do this, make sure your stones are physically clean (warm water, mild soap, and a soft cloth is enough for this). Then, shortly after sunset, place your stone in a windowsill, or outdoors where the moon’s rays can fall on it. Be sure to remove it before sunrise.

Getting Started With Sodalite

Sodalite is inexpensive and abundant, so it’s not too much of a challenge to find it in metaphysical shops. As with any crystal, make sure your sodalite was ethically harvested — any reputable metaphysical or crystal shop should be willing to stand behind their suppliers and their suppliers’ mining methods.

Sodalite isn’t often faked, but it can be. White howlite can be dyed royal blue to resemble sodalite, and some lapis lazuli stones may be mislabeled and sold as the wrong mineral.

Testing potentially dyed stones is fairly easy. Dip a cotton swab in acetone, and blot a discreet part of the stone. If the color transfers to the swab, it was dyed.

Comparing sodalite and lapis lazuli is a bit more challenging. While the two have some visible differences (lapis is typically more of an ultramarine versus a royal blue, and sodalite usually has more white spotting and streaking), the only real way to be sure is with a streak test.

This involves taking a plate of white, unglazed ceramic, and lightly scraping the stone across it to produce a single streak of color. Lapis lazuli will always leave behind a bright blue streak, hence its use as a cosmetic and art pigment. Sodalite’s streak is white.

Once you’re certain you have a genuine sodalite, it’s time to cleanse your stone. As mentioned above, some hold that this gem benefits the most from moonlight cleansing. The method you choose is entirely up to you — you may have one you prefer, or you may find that your individual stone leads you to choose something different.

After cleansing, you can begin working with your gemstone. If you’re planning to use it for magic, you might want to have a small consecration or dedication ceremony. If it’s intended for healing, try placing the crystal on the area you wish to heal while you meditate.

You can also carry sodalite with you, or incorporate it into a yoga or exercise routine. Since it helps with fluid imbalances, it’s very good for massage or exercise to help improve lymph drainage and water retention.

Sodalite is a lovely stone with some very useful properties. If you want to strengthen your intuition, view things with an objective eye, or heal your emotions or body, this pretty blue gem can aid you.