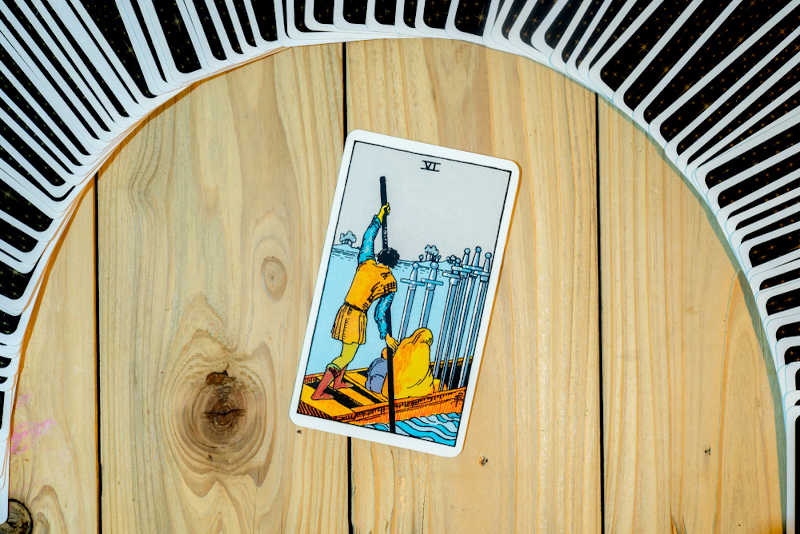 Depending on the context, it’s either a retreat or moving on from a source of difficulty. The battle is over — either won or lost — and it’s time to continue. The story has reached its climax, and is moving toward its dénouement.

About Six of Swords

Pamela Colman Smith’s art for the Rider-Waite-Smith tarot deck illustrates this card as three people — likely a family — in a boat. The viewer can only see their backs, so we have no facial expressions to go on. There also isn’t a lot of occult symbolism to interpret.

Fortunately, the figures in the boat are the least interesting aspect of this card. Their posture suggests that they’re either defeated, or simply tired. In either case, they appear to be moving away from something difficult, and toward land. For interpretation purposes, you have to look at the foreground, background, and boat itself.

The boat is just a little skiff, pushed along by one of the figures using a pole. It’s not a large, powerful battleship by any means — it barely has room for the three figures and the six swords they’re bringing with them. The swords seem secure, and all six are in the boat with the figures. This suggests that they’re getting away without suffering major losses in the process. Their problems are behind them.

This idea is reinforced by the water itself. A triangular sliver of sea sits in the foreground between the viewer and the boat. This area is rough, with many ripples and waves. Interestingly, it isn’t drawn as the wake of the boat — these disturbances crash against the side.

The rest of the water is perfectly smooth, stretching into the distance. The sea provides a metaphor for the boat’s journey. The figures are leaving a rough time and entering a smoother one. A few trees and land masses sit on the horizon.

The sky is gray and overcast, suggesting that a storm has only very recently passed.

In general readings, the Six of Swords upright represents healing and progress toward a more peaceful future. The obstacles you’ve faced aren’t yet completely in your rearview mirror, but you’re moving on.

This card can also indicate an escape of some sort. In some context, it may mean literal travel by sea.

Since the Rider-Waite-Smith illustration depicts a man rowing and steering the boat, it’s sometimes taken to represent guidance from spiritual sources. Metaphorically speaking, you’re one of the seated figures. Your guides are trying to do some steering for you right now.

When reversed, the Six of Swords’ eloquent oceanic metaphor is flipped. Now, instead of having the rough waters in the foreground, they’re in the background. The calm seas are no longer in the future, they’re in the past. This is a sign of trouble.

It’s generally taken to indicate that you’re moving into a difficult time. Since this card represents movement and progress when upright, its reversed orientation can also stand for stagnation or feeling stuck in your circumstances.

For love and relationship readings, the Six of Swords indicates that you’re moving into a calmer period following some trouble. This might’ve been arguments and friction within your relationship, or external difficulties that you and your partner had to weather together.

Either way, it looks like things are smoothing out for you for now.

If you’re single, then this card often means healing after a troubled relationship. You might not be ready to jump into dating just yet, but you’re getting better. It’s time to leave old wounds in the past and look forward to a brighter future.

If you’re in a relationship, the Six of Swords reversed probably isn’t a welcome sign. Tensions are rising, and you’re moving into a rough patch. You might find yourself arguing more with your partner, or feel that outside forces are trying to give you both a hard time.

This card can also indicate that you’re feeling stuck where you are. Your relationship might not be moving forward as fast as you’d like, which has you feeling like you’re spinning your wheels.

If you’re single, the Six of Swords can mean that you’re trying to push yourself to date before you’re ready. It’s possible that there are some old emotional wounds, and they need healing before you can enter a harmonious, balanced relationship.

Even if you feel stuck where you are, don’t force yourself into something you aren’t ready for — you’ll end up harming yourself and your potential partner.

In business and career readings, the Six of Swords is a sign that things are finally getting under control. After a rocky period, things are working like a well-oiled machine. You’re meeting your goals in a timely fashion, hitting deadlines, and handling any issues with ease.

This card can also represent expanding overseas, or business-related travel by ship.

For money readings, the Six of Swords indicates that you’re getting past an economically difficult time. You’re probably not exactly swimming in cash right now, but also don’t have to worry about bill collectors calling.

Keep doing what you’re doing and be careful not to jeopardize your progress. Avoid high-risk investments or frivolous spending.

For business and career readings, the Six of Swords reversed indicates delays, struggles, and trouble on the horizon. Expect a lot of turbulence, miscommunications, cancellations, and difficulties.

If you’re planning to expand internationally or travel by boat, your plans may be disrupted.

In a financial spread, the Six of Swords reversed is a sign of money trouble. Things were smooth for a while, but are starting to slip out of your control. It might be tempting to escape and wash your hands of the whole situation, but this won’t help.

Take control, trim any frivolous spending, and ask for help from a trusted friend or professional.

Six of Swords: Yes or No?

The Six of Swords can sometimes be a difficult card. As a “Yes or No” reading, it’s a “Yes.” This won’t come easily, however — the Six of Swords relates strongly to leaving the past and moving on from troubling circumstances. Things are improving for you, but the outcome you want comes after a very hard time.

If the Six of Swords is reversed, the answer is most likely “No.” Rather than moving on and being receptive to change, you may be attempting to keep things the way they’ve always been. This isn’t necessarily a healthy mindset, and not likely to yield what you want.

The Six of Swords can either be a sign of hope, or a warning. When upright, it shows a family leaving a turbulent past and heading into a peaceful future. Reversed, it’s the opposite.

Whenever it shows up, it’s an indication to either enjoy this period of calm, or course-correct before it’s too late.