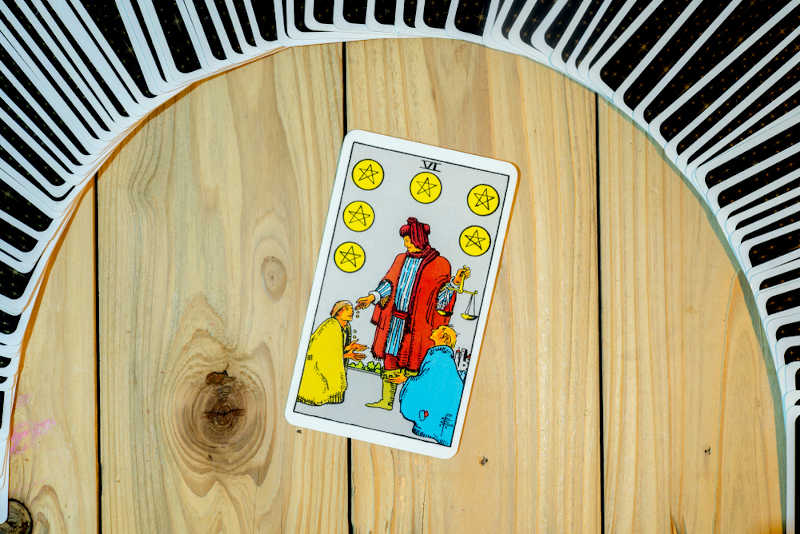 The Six of Pentacles is the mirror image of the Five of this suit. Where the Five talks about poverty, hardship, and suffering, the Six is charity. That said, this card is neither entirely positive nor negative. It lends itself to very nuanced interpretations.

About Six of Pentacles

In the Rider-Waite-Smith tarot, the central figure of this card is a merchant or banker. He’s well-dressed, wearing shades of red and white, holding a scale, and dropping coins in the waiting hands of another figure. This all takes place outside — the sky is overcast, and there’s a building visible in the background.

Two figures flank the merchant. One has a bandage around their brow, while the other’s cloak is patched and worn. Both of these people are on their knees, apparently begging.

This imagery is almost like a Rorschach test. There are a lot of things to take away from it, and the interpretation may depend heavily on which elements seem to “jump out” to the viewer.

The merchant is dispensing charity to people, but a few coins is a tiny fraction of the wealth he seems to possess. He also doesn’t seem to care about the dignity of the people he gives to — they’re groveling on the ground, outdoors.

Is this their choice, or simply how they’re expected to behave in order to be deemed worthy of help?

In a general sense, this card typically represents generosity. This may be toward you, or from you and toward others. If you’re having a hard time, it’s a reminder that community support is available to you.

This card also invites you to examine the motives behind giving. Is it for self-aggrandizement? Would we still give and receive this generosity if it was anonymous? What, if anything, does the recipient owe the giver? And what expectations do communities have of those who receive charity?

Answer these questions, and this card will reveal deeper layers of meaning to you.

When reversed, many of the questions posed by the Six of Pentacles upright come to the surface. This card represents stinginess, reluctance, and charity that comes with strings attached.

If you’re on the receiving end, you may feel that what you’re getting comes with so many conditions, it’s not actually charity at all. If you’re on the giving end, this card may highlight that true charity doesn’t come with requirements.

People deserve to eat and be sheltered even if they don’t fit the image of the “virtuous poor,” and, once you’ve given money to someone, they aren’t obligated to spend it in a way you approve of.

In a love reading, the Six of Pentacles can highlight the power dynamics that exist in all relationships. Overall, it’s a sign that you and your partner will be generous toward each other, and things will be harmonious.

Even if one of you is the breadwinner and the other performs unpaid labor, your relationship will have a balanced give-and-take. Together, you may be prosperous enough to extend your generosity to others.

If you’re single, this card can indicate that you may meet someone through charity. Being generous with your time and energy will lead you to opportunities to connect with others. Best of all, you’re likely to meet someone who shares your values.

The Six of Pentacles reversed is effectively the opposite of its upright orientation. When this appears, your relationship may lack balance.

One partner might be the breadwinner, and refuse to acknowledge the unpaid contributions of their significant other. Someone might even have adopted the mindset of, “what’s yours is mine and what’s mine is mine!”

This doesn’t just have to apply to money, either. There are many ways to be generous, and someone here is getting stiffed.

For single people, the Six of Pentacles reversed can indicate that parsimony is keeping people away. You might be reluctant to share your time and energy with others, which may make them avoid you.

Alternatively, you might be too open and generous, which ends up attracting those who wish to exploit you. In either case, this card tells you to examine your sense of generosity — something related to it is making your love life more difficult right now.

It’s up to you to examine your relationship with giving. Looking at other cards around this one can provide more context.

When it comes to business and money, the Six of Pentacles is a good omen. It’s a sign of success and being valued.

You’ll either end up benefitting from the goodwill of a manager or owner, or be in a position to extend that kind of generosity to others. If you own your own business, this card may indicate lots of new investments.

In a financial reading, it can represent gifts and charitable donations. You’re likely to be in a good position right now, either receiving abundant gifts, or able to give them to others.

When reversed, the Six of Pentacles can represent stinginess, job losses, or simply being overlooked and undervalued.

If you’re on the receiving end of someone else’s goodwill, they’re going to expect a sizeable favor in return — on that’s probably much more valuable than whatever they’re offering you.

If you’re on the giving end, this card is a warning. Don’t be too stingy or exploitative when you’re on top, because the Wheel of Fortune turns for everyone. The people you meet while you’re climbing the ladder to success are the same people you meet on the way back down.

In money readings, this card can signify stinginess or a reluctance to accept financial help. It may also represent being taken advantage of by a liar with a good sob story. The advice here is to find a middle ground. Don’t place conditions on what you give to others, but avoid letting your generous heart be exploited.

Six of Pentacles: Yes or No?

When upright, the Six of Pentacles is generally a “Yes” in a “Yes or No” reading. While its meaning is complex, it has a pretty positive overtone. Generosity and community help are both good things, so you can expect the outcome you desire.

Reversed, this card isn’t as positive. Instead of generosity, there’s miserliness. If you’re going to get anything from anyone, it’ll come with expectations attached. As a result, you’re looking at either a “No,” or a fairly negative “Maybe.” If things do turn out the way you want, it may end up costing you more than you anticipate.

No matter whether it appears upright or reversed, the Six of Pentacles represents generosity. It tells us to examine our feelings around charity, no matter whether we give freely, avoid giving, or worry about what it means to accept it.

If this card shows up in your reading, it’s time to explore what role generosity plays in your life and relationships.