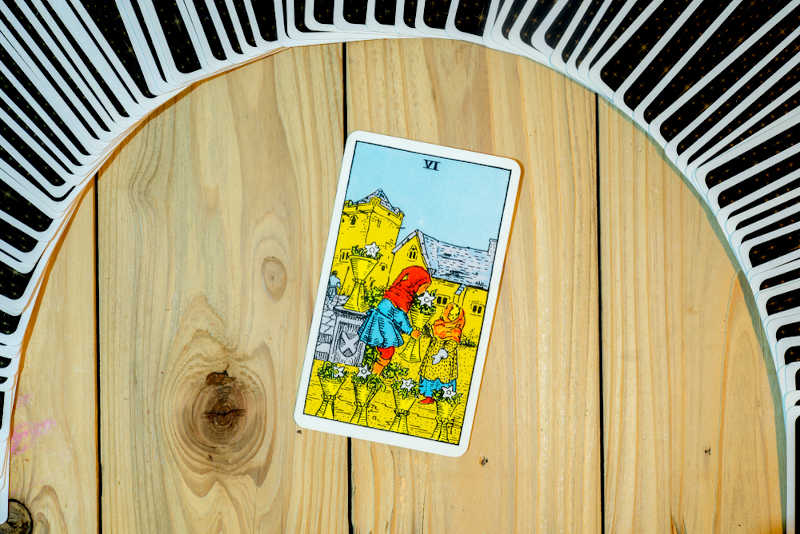 In all of the suits of the Minor Arcana, the Fives cards bring the drama. They’re when tensions are highest, and conflicts and problems arise. Following that, the Sixes are when things begin to calm down again.

They can be a very welcome transition from the obstacles portrayed by the Fives. In the suit of Cups, which relates to the emotions, Five relates to grief and loss. The Six of Cups, by contrast, is all about innocence and childlike joy.

About Six of Cups

The Six of Cups is a strikingly beautiful card. In the Rider-Waite-Smith tarot, it’s illustrated with a pair of children surrounded by golden goblets. They’re outdoors, and it’s possible to see houses and a street in the background. A man armed with a spear, possibly some kind of guard or patrolman, walks down the cobblestone street.

All of the goblets are filled with white, five-pointed flowers. The older child, a boy, appears to be offering one to the younger girl. She looks very happy to receive it.

The guard in the background is presented almost as impersonally as the walls and cobbled street. We don’t see his face, only his back and his spear. He’s walking away from the children, as if to emphasize that he has nothing to do with them.

The children are free to play and enjoy the flowers, without having to worry about the concerns of the adult world. They are protected and allowed to simply enjoy being children.

In a general context, the Six of Cups represents nostalgia, play, and innocence. It can refer to taking care of literal children, or simply reminiscing about the carefree times of childhood.

When reversed, the Six of Cups is sometimes interpreted as releasing the past. It’s more often cast in a negative light, in the sense of forgetting the lessons you’ve already learned.

It may also represent being wrapped up in nostalgia to a detrimental degree, to the point where you refuse to engage with the present. It can also represent naïveté and unrealistic ideals.

If you’ve had a difficult childhood, this card may be a positive omen. It can symbolize moving past the events of your youth.

In a love context, the Six of Cups can be a mixed omen. It’s very heavily steeped in child imagery, so it can represent having or raising children. It may also indicate that you and your partner have been together since childhood.

In a negative light, it can also stand for being caught up in the past and refusing to accept the present. You may be viewing your current partnership through rose-colored glasses, based on the way it was in its metaphorical infancy.

It may also represent issues in a relationship that stem from immaturity.

For single people, it can represent yearning for youth, when dating was easier. It can also indicate that someone from your past will reappear in your life.

When reversed, the Six of Cups indicates a relationship that may be more like two children playing house than an actual partnership. It can also represent a lack of passion, and two people who are more like roommates than a couple.

You may also be unfavorably comparing your current relationship to one from your past.

If you’re single, this card can represent clinging to the past. Are you holding out hope that a former lover will return to you, and subconsciously sabotaging your attempts to date again? Or is past trauma keeping you from feeling safe enough to open your heart to anyone else?

It might feel a bit strange to get a card relating to innocence and childhood in a career and business reading, but it’s actually a very good omen. Children are imaginative, creative, and feel limitless. They have nearly infinite potential.

This card indicates that now is a very productive time to “play well” with others — become involved with group projects, brainstorm together, and engage your creativity.

You may also want to look to your past for inspiration. If you’re feeling run down or uninspired, think back to the enthusiasm you felt when you were just starting out. There may be other valuable lessons you can take from your youth and apply to your situation now.

This card may also represent teaching, working in a daycare, babysitting, pediatrics, or otherwise working with children.

In a money reading, the Six of Cups may represent providing for one’s children or other heirs. It can also indicate gifts or sharing between family members.

When the Six of Cups is reversed in a career or business reading, you might be feeling bored or understimulated in your current role. You might find yourself staying for the sake of security, when you’d actually be happier and better off elsewhere.

This card can also indicate that you need to internalize the lessons of your past. If you feel like you’re stuck in a rut, it may be because there are things that you need to learn before you can move forward.

Financially, this card can represent developing financial independence. If you’ve been relying on family money, this can be a very good sign. Otherwise, you may wish to explore the patterns you’ve absorbed in youth.

If you’re dealing with bad monetary habits that were modeled for you as a child, it’s time to un-learn these things. This card may also signify that you’ve been dealing with your money in an immature way. It’s time to work on preparing for the future.

As a “Yes or No” card, the Six of Cups is often a “Yes.” This is a generally positive card that relates to childlike joy, innocence, and kindness. It’s a good omen for things going your way.

In some contexts, it might be a “Maybe” instead. While its overall message is positive, it’s also tied strongly to ideas of immaturity and irresponsibility. You might have to explore some of your expectations around your query in order to get a clearer answer.

Reversed, it’s neither a “Yes” or “No.” This card has a fairly neutral interpretation — letting go of the past can be either positive or negative, depending on the situation. As a result, it’s hard to get a clear, definitive answer here. You may wish to interpret the Six of Cups as advice, rather than an outcome.

The Six of Cups is often a very pleasant — if ambiguous — card. Unlike many others, it doesn’t have a very clear association with positivity or negativity. It represents innocence, but too much innocence can cross the line into foolishness.

It also stands for the joys of childhood, but there comes a time when it’s important to set aside childish things. When it appears, it’s important to consider your ideas, lessons, and perceptions related to youth and nostalgia.