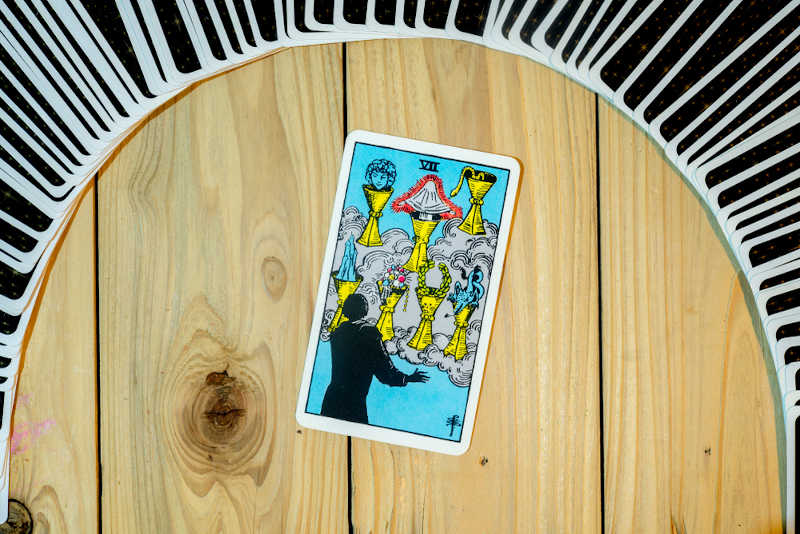 After the crisis point of the Five of Cups, and the recovery of the Six of Cups, what’s next?

If every suit in the Minor Arcana describes a cycle, then the Seven of Cups is another challenge. It isn’t as extreme as the conflict inherent in the Five of Cups, but still represents an obstacle.

This card is your opportunity to take the lessons you’ve learned so far, and apply them in a useful way. Follow the right path, and it could take you to the ultimate fulfillment embodied by the Ten of Cups.

About Seven of Cups

A.E. Waite described this card as depicting “strange chalices of vision.” In the Rider-Waite-Smith tarot, the Seven of Cups certainly has a very dreamlike quality.

In the foreground, we can see the back of a figure. They’re in silhouette, so there’s really no other information to gain from them. The important thing is what they’re focusing on.

Behind this figure, there’s an array of golden chalices on a cloud. Each of them holds a different object or scene. The first has a woman’s face, rendered in blue. The next is a luminous figure with a veil over their head.

After that, there’s a golden snake. The fourth chalice holds a miniature castle. The fifth, a pile of jewels. The sixth holds a laurel wreath. The final chalice holds some kind of winged serpent.

Each of these represents a different desire. The female head may represent love or beauty. The glowing figure may represent arcane power. The snake — similarly to other images of snakes throughout the tarot — may signify transformation and hidden knowledge. The castle can represent power and influence in the physical realm. The jewels are wealth. The laurel wreath is success.

The winged serpent is an interesting figure here. While the other chalices seem to represent things that most people would consider positive, the winged serpent seems to represent evil. Its expression is malevolent and sly, and it appears to crouch as if ready to pounce. This chalice may represent the man’s desire to indulge in his basest instincts — the urge for revenge, cruelty, or envy.

Some sources say that the winged serpent represents magic, but this is likely already represented by the glowing figure and golden snake. The serpent’s expression also indicates that, whatever it’s offering, it isn’t going to do the recipient any good.

When this card appears, you have an abundance of options open to you. You may not know what to choose just yet, and it can even cause “choice fatigue.” Be careful here, since not all of these choices are equal.

Choosing one may also keep you from pursuing the others later on. You may be tempted to accept all of the opportunities that you can, but this can set you up for failure if you don’t have the time or energy to follow through.

This card can also suggest that you’re caught up in fantasies. This isn’t necessarily a negative connotation — you may be a dreamer, and can take inspiration from that.

In either case, this card advises you to take an objective look at yourself, your situation, and your resources, and make a choice. Know your limits, and don’t bite off more than you can chew.

When the Seven of Cups is reversed, it can become the opposite of its upright orientation. You may not feel that you have many options, or might be coming back to a sobering reality after indulging in fantasies.

It’s a card that represents coming back to Earth and recognizing the limits of your situation.

In some situations, it isn’t an opposite at all. It can still retain its association with choices, options, and fantasies, but cast in a negative light. You may be feeling very indecisive, or your fantasies may be a maladaptive coping mechanism that keeps you from engaging with reality.

Interestingly, the Seven of Cups upright often indicates trouble in relationships. You may find that someone else catches your fancy, causing you to question whether you truly want to stay with your partner.

You may also be caught up in fantasies of ideal love and romance that don’t match your reality. In either case, you might be engaging in avoidance techniques that keep you from acknowledging and enjoying the relationship you have.

It’s time to figure out what you really want. If you want to pursue someone else, your partner deserves to be set free.

If you’re single, this card can be a very good sign. You’re likely to have lots of options right now. This isn’t limited to romantic partners, either — you may have opportunities to travel, learn, or pursue other interests.

In a love and relationship context, the Seven of Cups reversed can represent the end of a “honeymoon period.”

You’re beginning to see the realities of your relationship after a period of romantic fantasy. Your partner may be showing you a hidden side of them, or you might be settling into the reality of a domestic partnership of some form.

It’s also possible that you’ve been willfully ignoring problems in the hope that they’ll go away, and have recently learned that they won’t.

For single people, the Seven of Cups reversed can symbolize self-sabotaging fantasies. You might be clinging to an idealized version of the perfect partner, which is causing you to overlook potential partners in the real world.

For business and career readings, the Seven of Cups upright can be a mixed blessing. On one hand, this card may represent having abundant opportunities open to you. On the other, it can also symbolize getting caught up in the planning stages of an important project, and never following through.

It’s best to take stock of your resources here, then commit to an idea. Avoid taking on more than you can handle.

Financially, this card can represent having a lot of earning opportunities. Not all of them are equal, however — thoroughly research your options before committing any money to them.

The Seven of Cups reversed can symbolize feeling trapped or restricted in your career. You may feel that you don’t have options, or are kept in stasis and unable to advance. It can also represent feeling like you’ve missed an important opportunity by failing to act in time.

If you’re coming out of a period of uncertainty, this card can represent seeing your career path with clarity. You may be feeling more decisive now, and better able to make informed choices.

In a money reading, this card can signify clarity and the ability to be decisive. On the other hand, it can also represent the negative aspects of dreaming — avoiding your financial reality by falling into fantasies of get-rich-quick schemes or endless wealth.

Seven of Cups: Yes or No?

The Seven of Cups is a beautiful card that represents having many options available and doors open to you. Unfortunately, for a “Yes or No” reading, it’s either a “Maybe” or a “No.”

This card is neither positive nor negative — it represents paths untaken and choices unmade. It can also represent illusions that keep you from acting with clarity. Though a positive outcome is certainly possible, don’t expect one here.

Reversed, the Seven of Cups is still a “No.” You might feel trapped, or as if you don’t have many choices open to you. In your heart, you likely already know that you’re probably not going to receive the outcome you desire.

The Seven of Cups is a difficult card to interpret. Its meaning, just like its imagery, is nebulous and dreamlike. It often shows up in situations where you may feel like you’re caught in a dream, or endlessly pursuing a dream in order to escape reality.

Don’t be caught up in distracting fantasies right now. Take an objective look at your reality, and make a decision.