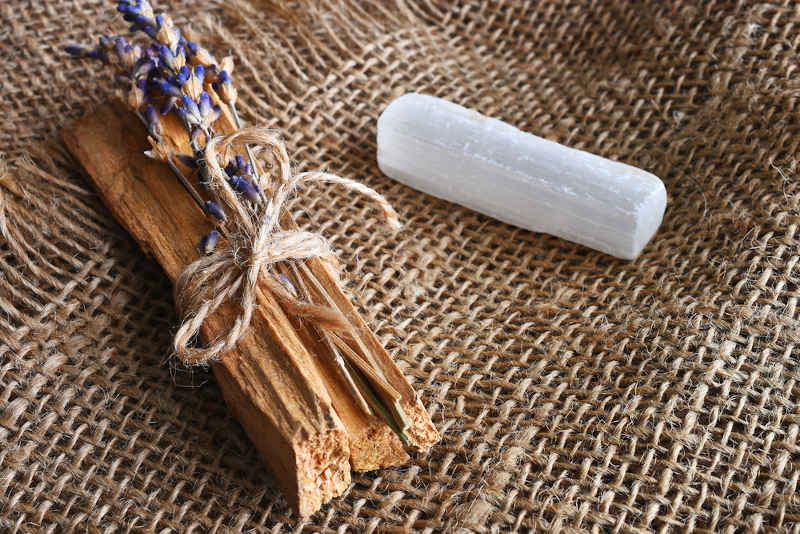 Few minerals manage to capture shimmering, soothing lunar vibes the way selenite does. Whether it’s a raw stone, or polished into a sphere or spiral wand, this crystal manages to exert a calming, cleansing effect on everything it comes in contact with.

That isn’t all selenite’s good for, either — it has several important healing properties, as well.

Selenite is a type of gypsum. Believe it or not, it has a very similar chemical composition to drywall! Drywall, alabaster, desert rose, gypsum flower, satin spar, and selenite crystals are all made up of calcium sulfate dihydrate. Despite the name, none of these contain the element selenium. They vary based on where and how they form.

Selenite, specifically, typically grows in columnar crystals that can become very large. Some of the biggest crystals in the world are made up of this mineral, including one particularly impressive specimen from Mexico that reached nearly 40 feet (12 m) in length. Some specimens may be tabular (flat) or form bladed rosettes instead.

This gemstone is most often colorless, though they can exhibit shades of yellow, red, or brown from the presence of iron oxide. Satin spar can have a translucent white or silver color, with a characteristic pearly “cat’s eye” appearance.

This gemstone is most often used for cleansing and relaxation. It helps with mental clarity, guidance, and meditation. Some use it to increase fertility and libido. It’s most helpful for those who suffer from racing thoughts, as it helps calm “mental chatter” and promote good decision making.

Physically, selenite is used for problems arising in the skeletal system, especially the spine. It’s sometimes used to help cleanse the effects of environmental pollution, to alleviate skin disorders like eczema, and to relieve pain.

Selenite is best known as a cleansing crystal. It’s said to be so high-energy that it never needs to be cleansed itself, though this is debatable. Placing it with other crystals or tools overnight, or using a flat “charging plate” made of this stone, cleanses and charges them at the same time.

Some people use thin wands made of pure selenite (or satin spar) to clear the energy of a person or room. These wands work as a kind of energetic lint roller, pulling negative or stagnant energy away from whatever they are used on.

This stone is also very calming, and is often used as an aid to meditation. Place large specimens in a room (or use a selenite tealight holder) for the best effect. It’s also said to help the user connect to higher intelligence — whether their own, ascended masters, deities, or spirit guides — and promote greater psychic awareness.

When placed under the pillow or near the bedside during sleep, selenite helps the user experience prophetic dreams.

Selenite can also serve as a protective amulet against psychic attacks. Since it’s very soft, it’s probably best not to wear it as jewelry — place it in a soft pouch and carry it in a purse or pocket instead.

As a white stone, it’s probably not a surprise that selenite is associated with cleansing, peace, purity, and protection in color magic. Some specimens can have other colors due to subtle differences in their mineral content, which may give them strengths in other areas as well.

Pink or peach, for example, are associated with love, friendship, beauty, and reconciliation. Gray is tied to psychic awareness, divination, and secrets.

For those who work with chakras, selenite is most often used for Sahasrara, the crown chakra. This energy center governs our connection to the universe, and is the most spiritual chakra. When it becomes blocked or unbalanced, we may feel isolated and spiritually “cut off.” Working with selenite can help open it, restoring our connection to the spirit.

The word selenite derives from Selene, the Greek Goddess of the Moon. According to folklore, there was a stone called the selenites lithos (“moon stone”) that changes its appearance as the moon went through its phases. This is the stone for which selenite is named.

This crystal can be found all over the world, but the most famous source is the Naica Mine’s Cave of the Crystals in Mexico. This cave contains some of the biggest crystals ever found. Unfortunately, due to the intense heat (up to 136°F, or 58°C) and humidity in the cave, much of it has resisted exploration.

When held at certain angles, some specimens of selenite can exhibit an interesting fiberoptic effect. They can take an image at one end of the crystal, and make it appear magnified on the surface of the other end. These stones are occasionally sold as “TV stone,” since they make images appear as if on a television screen.

How to Cleanse Selenite

As beautiful as it is, selenite isn’t the easiest stone to keep cleansed. This may be why some users choose to forego the process entirely — since selenite is regarded as a very high vibration stone and a powerful cleanser, they don’t consider it in need of cleansing. Nonetheless, you may occasionally wish to do so. If that’s the case, you can try one of the methods below.

Some methods for cleansing Selenite include:

Selenite is a very soft stone, at only a 2 on the Mohs hardness scale. This means that it can be scratched with a fingernail. For this reason, it’s best to avoid storing or cleansing this stone with anything harder than itself.

This crystal is also mildly soluble in water and very soluble in acids, so it’s important to keep it away from sources of moisture.

Getting Started With Selenite

As fragile as selenite is, it’s still a wonderful crystal for beginners. It’s sometimes difficult to find as jewelry, since it doesn’t hold up well to hard wear. Fortunately, its abundance means that selenite wands, towers, spheres, and pyramids are easy to find and inexpensive.

According to many enthusiasts, you don’t have to do much to selenite to prepare it for use. It’s important to choose an ethically harvested crystal that resonates with you, so it’s best to buy from a source you trust. If at all possible, you should handle your crystal before purchase. This will give you a good idea of how its energy feels to you.

Once you have your selenite home, your biggest decision may very well just be where to put it. If you have a large specimen, consider keeping it in the “heart” of your home — usually the kitchen or sitting room. This will let it affect the energy of your entire living space. If it isn’t that large, you may wish to place it where you spend the most time.

If you have a selenite wand, you can start using it for regular aura cleansing. To do this, picture your aura as a kind of energetic parka that covers your entire body. Hold your selenite wand in your dominant hand, the same way you might hold a lint brush.

Begin sweeping the wand over you, a few inches from your skin. Start with your feet and legs, and work your way up to your head. Don’t forget your back!

Keep your selenite somewhere cool and dry. Avoid holding long crystals tightly around the middle, since this crystal is actually slightly flexible and the combination of pressure and body heat may cause them to begin to bend in the center.

Selenite is a bit “fussy” compared to crystals like clear quartz, but it’s well worth taking the time to care for it properly.

If you store it well, handle it carefully, and treat it right, it will continue to provide you with its beauty and powerful energetic cleansing for years to come.