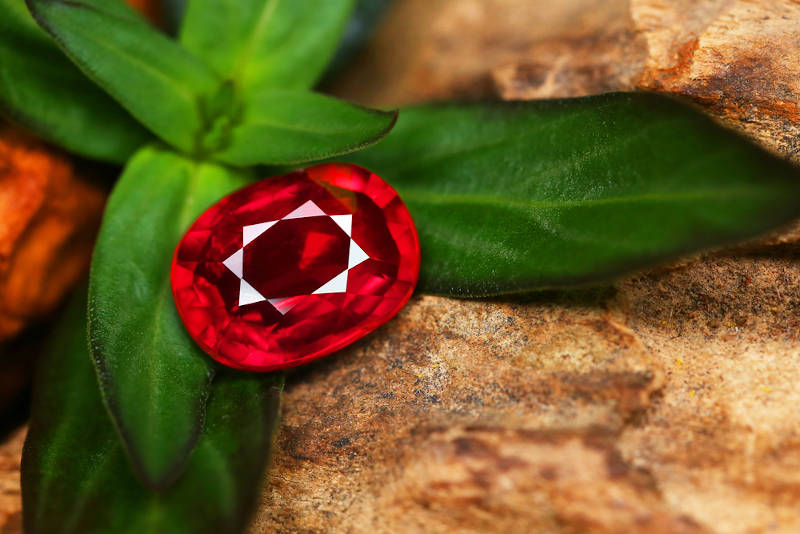 Rubies are one of the most valuable precious stones. While the mineral that makes them up is relatively common, gem-quality rubies are rarer than diamonds.

Fortunately for crystal healers and magic practitioners, lower-quality rubies are easy to find in metaphysical and crystal shops. These are just as powerful as their clearer, brighter counterparts, with an abundance of healing and metaphysical properties.

Rubies are a pink to deep red kind of aluminum oxide (corundum). This is the same mineral that makes up sapphires, but the inclusion of trace amounts of chromium causes the red color of rubies.

Lower amounts of chromium can cause rubies to be pink instead, but these gems are commonly sold as pink sapphires. The United States has a minimum color saturation that a corundum gemstone must meet in order to be a ruby, so those that don’t are considered sapphires.

Some rubies are considered “star rubies.” These have natural threads of rutile within them, which create a multi-rayed cat’s eye effect (chatoyance) when light strikes them. These rubies are typically given a cabochon cut in order to show off their unique appearance.

While gem-quality rubies are less common than diamonds, they’re judged by the same characteristics: color, cut, carat weight, and clarity. Rubies can be made in a laboratory setting, which turns out high-quality specimens with virtually no flaws.

Since truly flawless rubies are almost unheard of in nature, jewelers and gemologists use the presence of tiny flaws or inclusions of rutile to determine if a stone is natural or not.

Emotionally, rubies are crystals for creativity and passion. It’s also a stone of the heart, helping to bring past wounds to light where they can be healed.

Some use it as a stone for courage, strength, and vitality, similarly to garnet. Ruby is said to be particularly helpful for those who experience dysmorphia or low self-esteem.

Physically, ruby is considered helpful for problems involving the blood and circulatory system, including poor circulation and high blood pressure. This extends to menstruation — rubies are regarded as beneficial stones for the reproductive system, sexual desire, and pregnancy.

Some healers use star rubies to ease vasectomy reversal surgeries. As a stone for the blood, rubies are also sometimes used for detoxification.

Rubies have a long and varied history of magical and metaphysical use. When worn on the left side of the body, they’re said to draw in all kinds of blessings — from health, vitality, and courage, to friendship, love, and passion. It also serves as an amulet against theft, property destruction, nightmares, evil spirits, and snake bites.

These stones are considered a powerful way to instill courage in the user, especially against forces of darkness.

Rubies are also stones of vanity. While they’re said to improve circulation and vitality, women who wear them too often are in danger of losing their looks.

Like aquamarine, rubies are said to warn their wearer of danger by changing color. Interestingly, they are also purported to protect against most types of danger — including natural disasters, people with evil intentions, and baneful magic.

While rubies can be a bit too stimulating to use as a crystal for sleep and dream work, they are used to protect against nightmares. They’re probably best used when combined with other, more restful crystals like moonstone and amethyst.

In general, rubies are a powerful attractant for good things, and a protector against all forms of danger. They can be considered a generally lucky stone for most people.

As far as color magic goes, rubies are strongly tied to red. This governs lust, courage, ambition, and endurance.

In the chakra system, rubies are associated with the root chakra, Muladhara. This energy center governs survival, and blockages can manifest as anxiety, insecurity, and a lack of adequate energy flow to the other chakras. Wearing, carrying, or meditating with rubies near Muladhara is said to help unblock this area, restoring proper energy flow to the rest of the body.

Many famous rubies throughout history aren’t actual rubies at all. The Black Prince’s Ruby, a large, irregularly cut member of the British crown jewels since 1367, is actually a red spinel. Spinels are a type magnesium aluminum oxide that may exhibit a bright red color, just like rubies.

Historically, rubies were purported to make the user invulnerable when inserted somewhere in the body. Burmese warriors would carry or implant rubies in order to be invincible in battle.

The Chinese Emperor Kublai Khan is said to have offered an entire city in exchange for a ruby. Chinese nobleman also adorned their armor with the gem, in order to gain its protection.

In ancient Hindu folklore, offering rubies to the God Krishna was believed to greatly improve the offerers karma.

How to Cleanse Ruby

Rubies are brittle, but extremely hard at a 9.0 on the Mohs scale. Some sources say that their color can fade with exposure to heat and sunlight, so some care should be taken when cleansing them. Any one of the following methods will work.

Some methods for cleansing Ruby include:

While ruby is hard, it’s important to remember that it commonly contains flaws and inclusions that may make it more prone to shattering or cracking. Avoid letting it knock around with other crystals, as it may damage them.

Getting Started With Ruby

Rubies are very nice stones to work with. While gem-quality stones command a very high price tag, practitioners can choose to work with rough, lower-quality rubies or lab-created crystals instead.

The most important consideration here is that the stones are ethically acquired — as with anything expensive and highly desirable, rubies may be mined in unethical ways. Any good crystal supplier should be willing and able to stand behind the stones they sell.

When choosing a ruby, try to do so in person. This will let you hold the stone before you purchase it, so you can get an idea of how its energies react with yours. Just like a single perfume can smell differently on different people, each individual crystal will respond differently depending on who’s holding it.

As long as the crystal feels comfortable to hold, it will be a suitable tool for you. Avoid crystals that feel “prickly,” or who seem to make you inexplicably sad, angry, or anxious. They may be suitable for someone else, but these feelings mean that they aren’t good for you.

After acquiring your stone, bring it home and cleanse it. Crystals go through a lot between their formation, mining, polishing, shipping, and selling. This means that they pass through many hands, and many different energy fields.

While each crystal has its own innate energy, this energy can be temporarily altered by what it comes in contact with. Cleansing pretty much just changes the stone’s energy field back to the way it should be.

Once your ruby is cleansed, you may choose how to use it. If you’re undecided, try meditating with it for inspiration. You can also ask it to be a luck talisman for you, and carry it in a left-hand pocket (or, if it’s set in jewelry, wear it on the left side of the body). This is considered the “receptive” side, and is best for drawing things to you.

Rubies have been valued the world over since antiquity. Emperors traded cities for them, warriors tucked them under their skin for courage, and people wore them in hopes of love, wealth, and power. No matter whether you have a flawless lab-created gem, a natural crystal, or a rough stone, your ruby can be a very powerful healing, metaphysical, and magical ally.