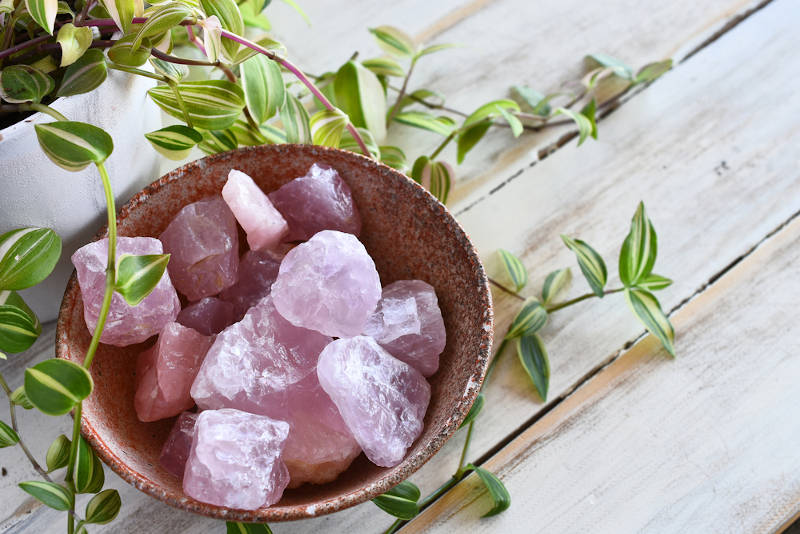 Rose quartz is called the “love stone,” which tells you a surprising amount about these pretty, pink-hued crystals. In both color and crystal magic, these are most often used in spells for all forms of love. Their abilities don’t end there, however — these stones also have a history of use as healing objects.

Rose quartz is a colorful variant of regular clear or white quartz. These stones exhibit a pale to deep pink hue, courtesy of trace minerals bound up in their molecular structure.

All quartz is silicon dioxide based. Variations in color occur when other material ends up inside the crystal, either on a macro scale (inclusions) or a micro scale (trace minerals).

Titanium, manganese, and iron are believed to be responsible for the color of rose quartz, though some studies suggest that very fine dumortierite fibers may color some specimens. In rare cases, some crystals may be pink due to trace quantities of aluminum or phosphate.

In some cases, rose quartz may contain needles of a mineral called “rutile.” When these are aligned a certain way, it can create a phenomenon called diasterism. In this situation, the rutile needles cause light to diffract in a star-shaped pattern, which is particularly noticeable in cabochons and spheres.

Rose quartz is often used to heal the heart. Among healers who follow philosophies originating in Hindu tantrism, the stone’s pink color aligns it with the heart chakra, Anahata.

This stone is also used for healthy skin. Rollers and massaging tools made of polished rose quartz are used to promote lymphatic drainage, calm breakouts, and reduce the signs of aging.

Emotionally, this stone is used to increase feelings of self-love, compassion, and sympathy. It’s often a cornerstone of emotional healing practices.

Physically, this stone is almost universal. It’s purported to be a sleep aid, ease pregnancy and breastfeeding, promote cardiovascular health, help the uterus and ovaries, and stimulate the lymphatic and urinary systems.

Rose quartz is the ultimate love stone. Any list of its magical properties will expound on its ability to draw in a new love, enhance an existing relationship, or even promote feelings of self-love and deeper compassion for others. It’s a popular ingredient for love-drawing potions and elixirs, and is almost always included in charm bags for attracting a new love.

That doesn’t mean that rose quartz is only good for love and romance, however. It can also be used to protect against nightmares and provide gentle, beautiful dreams. That said, it’s not often used for dream magic — while it can produce pleasant dreams, it’s not a tool for lucid or prophetic dreaming. This does make it a good sleep charm for children, however.

It’s also associated with beauty and harmony. Keeping a large rough specimen on one’s vanity can help with various beauty glamours. For hair dressers and beauty consultants, it’s an excellent stone for keeping in the workplace. For other businesses, a large rose quartz can help stop office backbiting and gossip by promoting a more compassionate workplace.

As a pink stone, rose quartz is useful for all forms of pink color magic. This includes friendship, beauty, reconciliations, harmony, and love.

While the heart chakra’s color is typically green, pink stones are said to be able to open and balance this energy center.

The heart chakra, Anahata, is tied to one’s ability to give and receive love. When it’s balanced, healthy relationships and self-compassion come easily. When it isn’t, promiscuity, toxic relationships, and obsessions can result. Wearing or meditating with this stone near the heart area may help relieve issues with Anahata.

Rose quartz is an ancient beauty remedy. The ancient Romans and Egyptians used it topically as a face mask, and believed it could keep complexions smooth and youthful.

According to Egyptian lore, the Goddess Isis used a river-tumbled rose quartz to massage her face, in order to keep herself beautiful.

In China, it was prized for its beauty and used for carvings.

The ancient Greeks had multiple legends about this pink stone. In one, the God of love brought it to the world to incite love and romance among people. In another, Aphrodite’s lover, Adonis, was attacked by her other lover, Ares. As she rushed to save him, she was scratched by a thorn. The falling drops of blood struck a nearby quartz stone, coloring it pink.

How to Cleanse Rose Quartz

Cleansing is pretty much shorthand for returning a crystal to its energetic baseline. Stones are sensitive, in a sense — they can pick up on the energetic fields of people who handle them.

If your stones are new to you, you use them to heal others, or you’ve handled them when you were feeling sad, angry, anxious, or ill, they may have picked up some unwanted energy along the way. Cleansing is a process of recalibration, which eliminates these stray traces of energy.

As a variety of quartz, this stone is safe to cleanse using most conventional methods.

Some methods for cleansing Rose Quartz include:

Unfortunately, rose quartz is one of those stones that tends to fade when exposed to bright sunlight for long periods of time. Short exposures are okay, but some very stunning mineral specimens have been rendered nearly colorless after spending too long in the sunlight.

If you choose to use sound cleansing, avoid placing stones directly in a singing bowl. The intense vibrations may cause delicate crystals to shatter.

How to Charge Rose Quartz

You can charge rose quartz by placing it in the light of a full moon, or holding it in your dominant hand. Crystals have their own innate energy, so they don’t need to be “charged” the way one would charge a battery.

To some, cleansing and charging are the same process. To others, charging is more like programming — you align the crystal’s energy with the intent and direction you desire.

If you have a freshly-cleansed rose quartz that you want to use as a beauty aid, for example, you might choose to hold it in your hand and fill it with this intent. That won’t change the amount of energy in the stone, but it will align it with that purpose.

Getting Started With Rose Quartz

Fortunately for those new to crystal magic, rose quartz isn’t particularly expensive or hard to find. Some specimens may be artificially colored, but most are natural.

Try to buy crystals from suppliers who know where they originated from — some sellers purchase cheap stones that may have been produced unethically. Always do your homework before purchasing a crystal!

Once you have a stone, it’s important to cleanse it. You can use any of the methods mentioned above, according to your intuition. This will remove the traces of energy from everyone who handled the crystal before you did.

At this point, you can choose what you’d like to do. Will your stone be a massage tool to beautify you? Will you place it under your pillow for pleasant, peaceful dreams and healing sleep? Will you carry it to draw love into your life?

When you decide, hold the crystal in your dominant hand. Draw energy up from the earth and down from the sky, and feel it blending within you. Send this energy into the stone as you visualize your desire.

When it feels as though your rose quartz has absorbed all it can, set the stone down and shake your hand out. It’s now ready to be carried, used, worn, or whatever you like.

Rose quartz is an excellent stone for beginners. It’s inexpensive, common, and full of calming, loving energy. As long as your intention aligns with the stone’s power, it can serve you as a very helpful magical, spiritual, and healing ally.