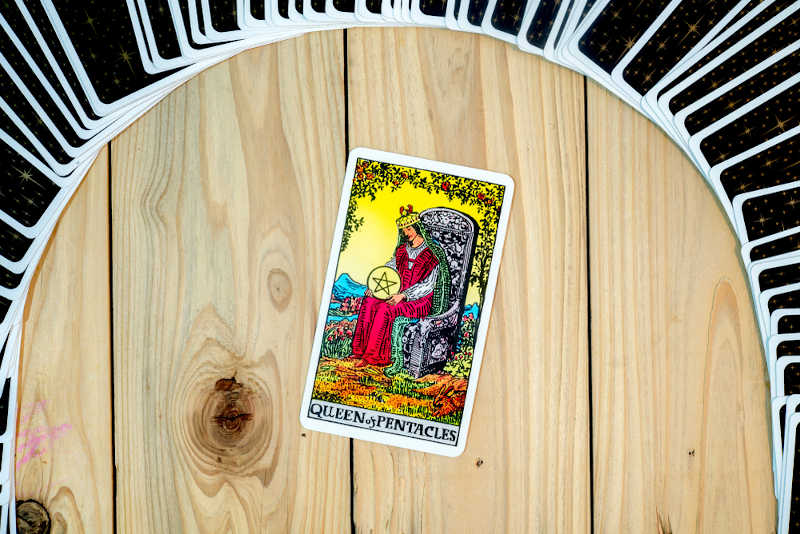 The Queen of Pentacles is one of the sovereigns of all things related to the element of Earth. Unlike the Page of her suit, she is mature and wise. Unlike the Knight, she knows when to act and when to be still.

She embodies a fully developed energy that encompasses all of the good and bad associated with her element.

About Queen of Pentacles

As one of the rulers of the suit of Pentacles, the Queen is typically depicted with a lot of Earth elemental symbols. In the Rider-Waite-Smith tarot, her throne is made of stone decorated with fruit and flowers. This motif mimics the lush flowering vines around her. This imagery is also echoed on her crown.

Her attire is not quite as fancy as the Queens of other suits. She wears a white chemise under a loose-fitting red gown, and a long green veil without any elaborate ornamentation. This speaks of her frugal, sensible nature.

In her hands, she holds a large golden pentacle. Her gaze is focused on it, which suggests that she, like the Queen of Cups, is more occupied with her inner state. This stands in contrast to the Queens of Swords and Wands, who gaze outward.

The background of this card depicts a very fertile, lush landscape. Mountains peak under a yellow sky, and there are rolling hills full of flowers, grass, and moss. In the lower right corner, a brown rabbit dashes onto the scene. Rabbits are associated with Earth, and are used to illustrate fertility and prosperity.

The Queen of Pentacles is typically a good sign for a general reading. She speaks of prosperity, abundance, fertility, and a secure social standing, particularly when they come about as a result of careful planning and hard work.

Sometimes, she appears to offer advice. She advocates approaching your situation in a level-headed, practical manner.

Since the Queen of Pentacles is a face card, she may appear as a signifier. In this case, she represents someone who is most likely older, feminine, and born under an Earth sign. This person is probably very warm, hospitable, and a natural confidant. You may feel very comfortable with them very quickly.

When reversed, the Queen of Pentacles may represent the opposite of her upright orientation. She can appear this way when you’re feeling out of control or dependent on others for your survival.

You may also be feeling or behaving in a manner that’s pretentious, materialistic, or gold-digging. She advises you to sort out your priorities in life, and learn to spend your energy in a way that allows you to be independent, without falling into greed.

As a signifier, the Queen of Pentacles reversed can represent a person who is feminine, mature, and an Earth sign. This person may be very preoccupied with status, a social climber, and shallow.

While you might feel comfortable with them at first, this comfort is a trap — it’s likely that they’ll stop being kind as soon as you stop being useful to them.

As a love and relationship card, the Queen of Pentacles is a very good omen. Your relationship is most likely very secure and stable now, and may be expanding — this card is often an omen of pregnancy or birth.

She may also represent either you or your partner, and the virtues of warmth, nurturing, and loyalty. This card can also be an omen of buying a home and being a gracious host to others.

For single people, the Queen of Pentacles says that you’re in a place in life where you’re feeling confident and secure. It might be a great time to meet someone new!

As a signifier, this card can also represent a prospective romantic partner. This person will most likely be feminine, older, born under an Earth sign, and very warm, welcoming, and generous.

Reversed, the Queen of Pentacles isn’t a good omen for stable and loving relationships. Instead, she represents feelings of self-doubt, insecurity, jealousy, or boredom. She may also indicate a relationship that’s primarily based on social status or money, rather than love.

If you’re single, the Queen of Pentacles reversed warns that you may not be as ready for a relationship as you think. You might be feeling insecure, or afraid about your future. The desire for social or financial security aren’t sound foundations for a relationship.

This card may also signify a potential romantic partner. If so, they will be feminine, mature, an Earth sign, and possibly insecure, manipulative, and gold-digging. Be cautious. While this person may seem charming at first, this charm might be a trap.

Since Pentacles and the element of Earth deal heavily with money, hard work, and prosperity, the Queen of Pentacles is a very good omen for anything related to careers or business.

You’re likely to be very successful right now, and possibly even elevated into a position of authority. (The Queen isn’t the Queen for nothing, after all!)

This card can also represent a co-worker, boss, advisor, or another woman or feminine person who has a significant positive impact on your career.

For financial readings, the Queen of Pentacles indicates that your hard work and solid plans are paying off. Money is coming in, you’re feeling financially secure, and all is well.

Remember, however, that the Queen still represents frugality — don’t start spending recklessly, or you may lose what you’ve gained.

In a career and business reading, the Queen of Pentacles reversed isn’t a good sign. You might be lacking some of her better attributes right now, and feeling disorganized or lazy. You may also be hoping for success, but not putting in the hard work to get there.

The Queen of Pentacles reversed can also represent parasitic business relationships. You or someone near you might be behaving in a deceptive fashion purely for financial gain. Be careful.

In financial matters, the Queen of Pentacles reversed represents losses. You might be losing money through poor planning, or because of excessive spending on “high status” items. She may also indicate hoarding behavior.

Queen of Pentacles: Yes or No?

In general “Yes or No” readings, the Queen of Pentacles represents a “Yes.” She’s a symbol of generosity, success, and fruitfulness, all of which are probably good energies to have on your side. Whatever outcome you desire, you’re most likely going to get.

Reversed, the Queen of Pentacles isn’t nearly as helpful. She becomes a greedy, manipulative social climber, eager to use and abuse whoever she needs to in order to get ahead. In all likelihood, the answer to your query is “No.”

The Queen of Pentacles is a card of abundance, hard work, and sensibility.

As a ruler, she is very involved with the wellbeing of her land, home, and those around her — her prosperity is their prosperity. When reversed, this energy goes to the extreme and turns from abundance into greed, and sensibility into manipulative gold-digging.

Be sure to follow her advice, particularly in any matters that deal with money, growth, or putting down roots.