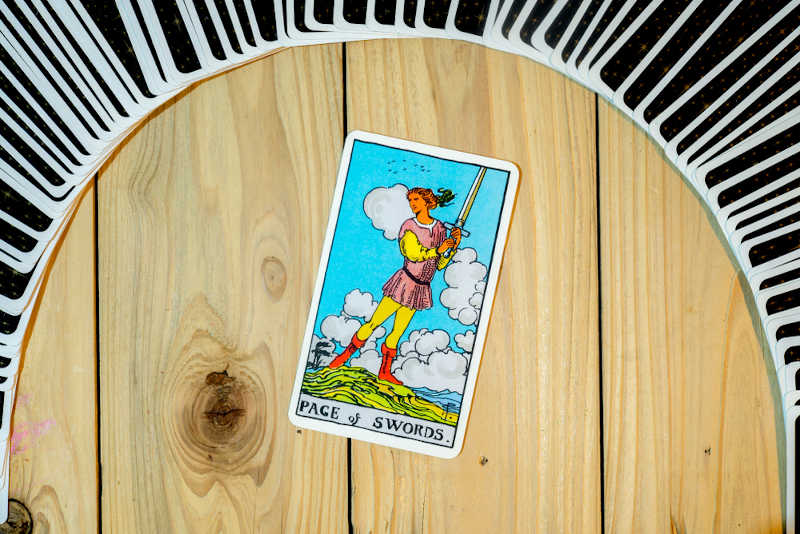 The Minor Arcana has a court of face cards, just like modern playing cards. The first cards in this lineup are the Pages, which are roughly analogous to Jacks.

The Pages generally stand for young, optimistic, energetic figures, who can also tend to be naive, impulsive, and easily fooled.

Depending on their suit, they may show other hallmarks of immaturity that color their meaning. For the Page of Swords, this includes Air-governed traits like deceitfulness or manipulation.

About Page of Swords

The Pages embody the energy of their suits in an immature form. In the Rider-Waite-Smith tarot, this is very evident in the imagery of the Page of Swords.

This card is illustrated as a young man wearing yellow hose, orange boots, and a beige tunic. Unlike the other Pages, he doesn’t have a hat — instead, his hair is swept back from his head by the wind.

He holds a sword in his hands, but his body is turned as if standing against a strong gust. The background supports this, too. Even the ground under the Page’s feet looks rippled by the wind.

A tree in the distance shakes and bends in the breeze, and a flock of birds coast and wheel through puffy white clouds.

The Page’s expression is determined, perhaps even stubborn.

Pages are messengers. The suit of Swords is associated with the element of Air, which governs logic, thought, and communication. For this reason, this card generally indicates ideas, well-thought-out plans, debates, and brainstorming.

You might have a venture that you’re very excited about, but not making much progress on. This card arrives to tell you that this is the communication and planning stage. If you can engage your mind here, you’ll have a better start once things get moving.

This card may also represent a person. They’re likely to be young, and very clever — possibly even cunning. They may be born under an Air sign.

When reversed, the Page of Swords shows more of his negative attributes. Instead of rational, he becomes cold and calculating. Instead of clever, he is cunning and deceptive.

This card can indicate that you, or someone around you, is exhibiting these traits. It may also represent feeling uncommunicative, or not knowing what to say.

In some contexts, the Page of Swords reversed symbolizes delayed or disappointing news of some sort. This may relate to ideas or intellectual pursuits.

This card can also represent a young person. Be careful, because this person may be trying to scam or deceive you.

In terms of love and relationships, the Page of Swords often isn’t a very good sign. As a messenger, he can show up to warn about differences of opinion, arguments, or intense debates.

You might be entering a period of heightened conflict in your relationship. There may also be an element of emotional avoidance — the suit of Swords is all about logic, intellect, and rationality, so there isn’t much room for feeling.

If you’re single, then this card can represent entering a less feeling-oriented phase. It may take you longer than you’d like to meet someone, but that’s okay. Focus on intellectual pursuits, conversation, and improving other aspects of your life first.

When reversed, the Page of Swords isn’t any better than it is upright. It can indicate that someone in your relationship isn’t being totally honest — at best, they might be telling little white lies. At worst, they could be gaslighting or manipulative.

This card can also represent disappointing news. While the suit of Swords generally doesn’t deal with news of an emotional nature, it can still have a negative impact on your relationship.

For single people, the same holds true. If you’re hoping for a relationship right now, you may find yourself disappointed. This card can also represent someone who’s young, intelligent, and attractive, but prefers to play mind games rather than emotionally commit.

The Page of Swords upright can be a good omen for careers and business, but it depends on what you do with the message you’re being given. The Pages indicate potential, rather than a certain outcome. They are messengers, not the content of the message itself.

This card can signify that you’re feeling optimistic and full of ideas, with far-reaching ambitions. This is great, but you’ll need to back this up with action if you’re going to make anything out of it.

This card can also indicate positive news that’s delayed. If you’re waiting for a message about your career or business, be patient and don’t react hastily.

The same is true for financial readings. This card can represent news that takes a while to get to you. Avoid making impulsive investment decisions until you have all of the facts. The Pages are youthful and often foolhardy, so you might want to seek out help from someone with experience first.

When the Page of Swords is reversed in a career and business reading, you might be feeling like you’re out of ideas, or having trouble communicating with your co-workers. You might also have trouble acting on the ideas that you do have, which can keep your career at a standstill.

If you’re waiting for job-related news, it may be disappointing.

For money readings, the Page of Swords can represent bad financial news. You might hear about underperforming investments, changes to a will, a denied loan application, or other situations that aren’t what you hoped for.

Create a plan to carry you through hard times, and don’t rely on money that isn’t in your hand yet.

Page of Swords: Yes or No?

Overall, the Page of Swords is considered a “Yes” card in “Yes or No” readings. That said, this figure represents delayed or challenging news, so this “Yes” might not be as easy as you think. Expect some difficult truths to come to light.

Reversed, the Page of Swords becomes a “No.” This card can represent news that’s actually bad, not merely delayed. Chances are, you’re not going to get the results you’re hoping for here. This may be because of poor planning, defensiveness, or malicious acts.

The Page of Swords is neither positive nor negative. This card represents the intellectual energy of the suit of Swords in both its most positive and negative aspects.

Upright, it’s clever, communicative, and able to debate and reason intelligently. Reversed, this energy can become deceitful and sneaky.

Always keep your eyes and ears open when the Pages come into play, and look to the cards around them for more information about their messages.