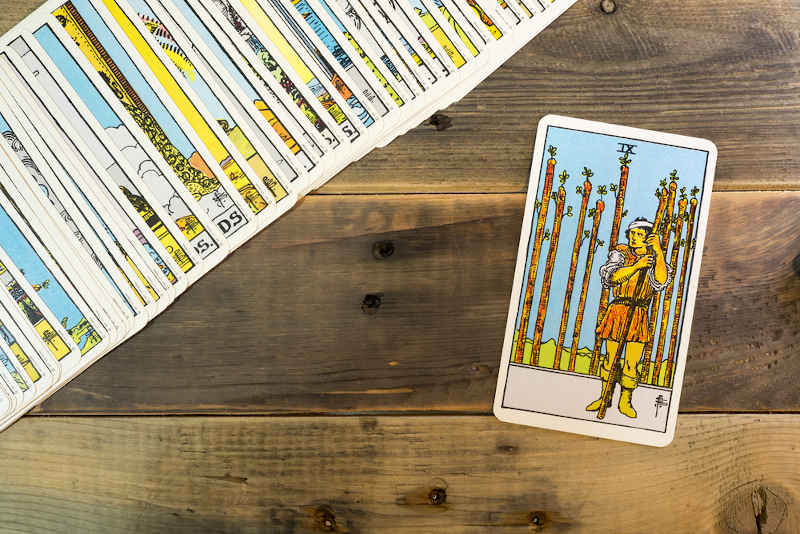 Nine is the last single-digit number. Numerologically, it represents the final step before the completion of a cycle. The same is true in the Minor Arcana of the tarot.

The Nine of Wands represents the rest after all of the choices have been made and battles have been fought. It’s the time to look on what you’ve gained, and ready yourself to defend it.

About Nine of Wands

The Nine of Wands is a very interesting card. If you look at the suits of the Minor Arcana as stories, two suits have what could be considered “good” endings, while two have “bad” endings. In truth, things are rarely so simple, but it’s also true that the suit of Wands tells a story about struggle and challenges.

In the Rider-Waite-Smith tarot, Pamela Colman Smith illustrated this card as an injured man guarding a stand of wands. Eight of them are in a row behind him, and the ninth one is in his hands. Judging by the bandage on his head, he’s been injured in his attempts to fight for these wands. That said, his expression seems satisfied and determined. He looks strong.

He also isn’t leaning on the wand in his hands — he’s holding it as if he’s ready to use it as a weapon at any moment. Behind his row of wands, you can see green hills and a blue sky. These indicate that there isn’t any trouble coming for him just yet, but he’s ready when it does. He’s looking over his shoulder, at his wands, and he’s ready for whatever comes.

In a general spread, the Nine of Wands is an encouragement. It acknowledges that you’re likely almost at your limit. You’ve been through a lot, and it’s wearing on you. This card tells you that your struggles are almost over, and you have the strength within you to keep going.

It’s time to gather your resources, get your second wind, and push through.

When reversed, the Nine of Wands represents giving in instead of staying strong, or being stubborn and unforgiving instead of adaptable. This card shows up when you may be feeling weak and ready to quit. You’ve made it this far, but may feel like you want to give up just before succeeding.

In some contexts, it can also indicate unexpected obstacles. In its upright position, the figure in the card looks over his shoulder, at whatever might be coming up behind him. A reversal reverses this meaning — you may not be looking out for yourself, and trouble will come knocking at your door.

The Nine of Wands upright is a tough card to get in a relationship reading. It indicates that you’ve been going through a difficult time, and your patience and energy are nearly gone.

On one hand, this means that you’re no longer actively battling anymore. On the other, you’re still prepared for whatever else is about to come at you. Fortunately, this card is a reminder that the worst is behind you. Sometimes, the only way through difficult times is by pushing through.

For single people, this card can indicate fatigue and frustration with seeking a partner. Like the old song says, “love is a battlefield,” and you may be left exhausted by now. Protect your heart, maintain your standards, and don’t settle for the next person who comes along.

When reversed, the Nine of Wands isn’t any better than its upright orientation. It can indicate locking horns with your partner, with both of you refusing to back down.

It can also represent being so exhausted by arguments and problems that you’re ready to give in just to make it stop. Neither of these situations are healthy for a relationship.

If you’re single, then this card can symbolize being ready to give up and settle for a partner, no matter who. It can also show that your emotional trauma is closing you off from being receptive to others.

When you see the Nine of Wands upright in a career reading, it points to difficult projects and long processes. The suit of Wands deals with creativity, so it’s likely that you’re struggling with creative projects in particular.

You might be stuck between the drawing board and a seemingly endless list of client requests and revisions. Luckily, the finish line is in sight — you’re doing a good job, you just need to persevere for a little longer!

Financially, this card can represent having to stretch your last dollar. You might’ve been hit with a lot of unforeseen expenses recently, or even had to take medical leave that’s prevented you from earning money.

This suit’s association with creativity indicates that it might be time to come up with a side hustle, or another “outside the box” method of making money until you’re back on your feet again.

Reversed, the Nine of Wands hints at a very difficult work atmosphere. In a career spread, this card can point to power struggles, difficulties with stubborn co-workers, or projects that leave you feeling drained.

You may be torn between digging in your heels or giving up entirely, but neither of these is the best approach. See what you can do to tackle this problem in a constructive, creative way that leaves you with enough energy to make it to the end.

In a money reading, this card shows that you’ve been having financial trouble. In response, you might either want to guard your money like a dragon, run away from your responsibilities, or ignore them. It might be time to seek some professional guidance on how to restore balance to your accounts.

Nine of Wands: Yes or No?

When it comes to “Yes or No” questions, the Nine of Wands can be frustratingly ambiguous. That’s largely because the conflict it depicts isn’t over yet — the figure in the card is persevering, for now, but that can change. While the Nine of Wands is encouraging, it’s still a “Maybe.”

Reversed, that “Maybe” turns into a “No.” This Nine of Wands represents either giving up, or staying rigid in the face of a situation that requires flexibility. Neither approach is ideal, so things probably aren’t going to turn out the way you’d like.

The Nine of Wands is a difficult card. Even at its best, it points to persevering in the face of struggles that drain your energy and leave you feeling beaten.

Take heart, however. This card appears to let you know that your troubles will soon be over, you just need to hold on and keep going.