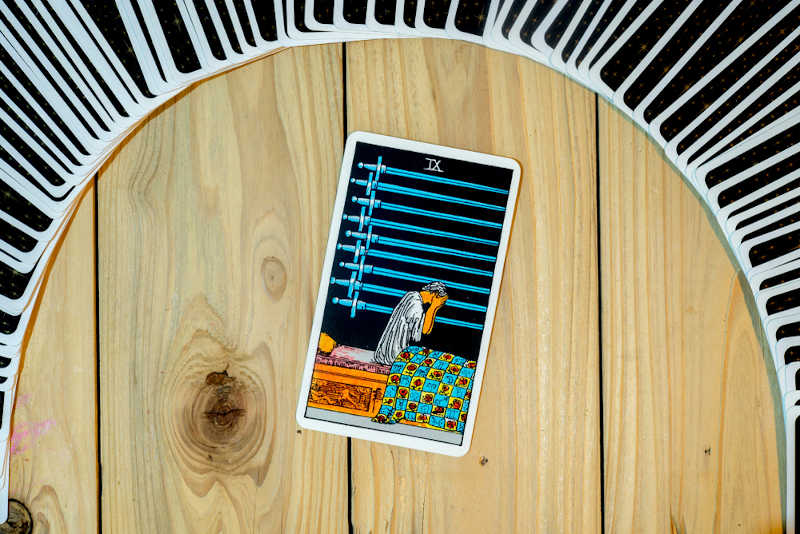 The Nine of Swords is considered a very negative card. As a rule, Nines appear when you’re nearing the end of a cycle. They’re the penultimate pips card. The suit of Swords deals with logic, action, conflict, and oppression. They often describe the intellect, as well as mental struggles like anxiety and nightmares.

About Nine of Swords

If you read the suits like a story, each one has its own ending. The Cups and Pentacles have endings that are considered positive, but Swords and Wands end poorly. Pamela Colman Smith, the artist for the Rider-Waite-Smith tarot, illustrated this card with dark colors and a bleak atmosphere.

The central figure is a person of indeterminate gender — their face is covered, and they’re clad in a nightgown. They appear to have woken from a nightmare, since they’re sitting bolt upright in bed. Judging by their posture, whatever emotions they may be feeling definitely aren’t positive.

Their bed is heavily laden with symbolism. The quilt covering it is full of zodiac signs and planetary symbols. The side of the bed sports a carved design that seems to depict a battle. While details are lacking, one figure stands in a fencing pose, while their opponent seems to be falling to the ground.

The background of this card is completely black, save for nine swords mounted to the wall. The perspective means that some of them pass through the body of the central figure, appearing to impale them through the head and torso. It’s a distressing image that immediately conjures up feelings of anxiety, stress, and intense unhappiness.

The Nine of Swords upright isn’t a very good sign. At best, it indicates that you’re dealing with some extreme anxiety, stress, and possibly even insomnia. You might have stress-related psychosomatic symptoms, like headaches.

The good news is that the problems you’re facing right now aren’t nearly as bad as your mind is making them out to be. You’re viewing this situation through the lens of your anxieties, which can cause them to seem worse than they really are.

As with other Nines, the Nine of Swords reversed is contradictory. In its positive aspect, it can represent a lessening of anxiety and a period of relief during hard times.

In its negative aspect, it indicates deepening depression and worsening anxiety. This card can also relate to trouble sleeping, nightmares, slander, or episodes of severe mental illness.

This card is a bad omen for relationships. Ideally, a partnership shouldn’t cause anxiety, depression, or sleepless nights, but that’s exactly what the Nine of Swords points to. Something here is causing you distress.

Depending on the positioning or surrounding cards, the Nine of Swords can also indicate that one partner may be suffering from physical or mental health issues that are putting a strain on the relationship.

For single people, this card can represent anxiety about being alone, regret about past relationships, or even post-traumatic stress disorder from past emotional wounds. It may be wise to seek a professional’s help to deal with these issues, so they don’t continue to sabotage your personal relationships.

Upside-down, things aren’t much better. The Nine of Wands reversed can indicate a lessening of tensions within a relationship, but may also indicate that things are nearly intolerable. It can represent deepening anxiety, remorse, guilt, or problems with mental health.

Fortunately, things can likely only improve from here. You’re near the end of these difficulties, so they’ll either get better, or end. You may be nearing a crisis point that makes it possible to seek some kind of intervention.

If you’re single, then this card can indicate healing emotional wounds and opening yourself up to others. On the other hand, it can also indicate severe emotional trauma. In some contexts, it may represent the anxiety that comes with being embroiled in a scandal. Be careful who you get involved with!

Upright, the Nine of Swords points to a very stressful work environment. You might be taking a lot of stress home with you, which is keeping you up at night.

This could be coupled with aggravated anxiety about money, leading you to worry more about your job than you should. It’s time to get a handle on things before this self-perpetuating cycle spins out of control. Your situation likely isn’t nearly as bad as it seems.

Financially, this is still an anxiety card. You may be experiencing some financial instability, but a good portion of that perceived instability may be all in your head. If you can stop, take a breath, and attempt to view your situation objectively, you just might see that it’s not as bad as you think.

Reversed, the Nine of Swords is either good or bad for a career reading. As a good omen, it represents lessening anxiety and tension. You might be under less pressure now than you were in the recent past.

As a bad omen, it’s a sign that your job is completely overwhelming you. It can also represent a job loss, or, if you own your own business, closures or bankruptcy.

In a money spread, the same applies. You’re either experiencing a period of less financial pressure, or are struggling. It may be time to seek professional assistance to help you deal with things before they reach a breaking point.

Nine of Swords: Yes or No?

The Nine of Swords is a tough card to get in any reading, including a one-card “Yes or No” pull. It’s a card of stress and negativity, which means that it isn’t likely to give you the answer that you want. This card is pretty much always a resounding “No.”

Reversed, the Nine of Swords is a little more positive. Unfortunately, it can be frustratingly nonspecific. This card means you’re either experiencing a reprieve, or things are getting worse. Some readers interpret this card as a “No,” while others view it as a “Maybe.” In either case, the answer is not likely to be the one that you’re hoping for.

The Nine of Swords is a difficult card to interpret. The suit of Swords deals with the mind, so most of its meaning is tied up in anxiety, remorse, and fear.

Digging through this anxiety to see the truth of your situation can be a real challenge, but looking to the surrounding cards can help give you more context and perspective.