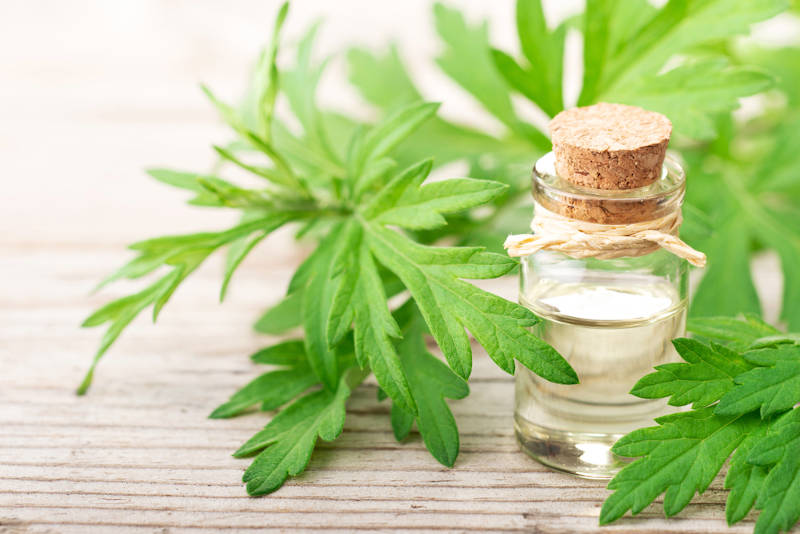 Mugwort (Artemisia vulgaris) is the witch’s herb par excellence. This lush, green lunar herb has a long history of use in magic and as a healing herb.

Once used to flavor beverages and keep away pests, this herb has naturalized all around the world. Wherever you find disturbed ground with lots of sun, you’re likely to find this tough, hardy plant.

Artemisia herbs, as their name implies, are sacred to Artemis and Diana.

Mugwort is perhaps best known as a divination herb. Tools such as crystal balls and scrying mirrors should be washed with an infusion of this herb.

It’s also a mild entheogen when smoked (either on its own, or blended with other smoking herbs) or burned as incense during divination to enhance psychic and visionary abilities.

Tea made from mugwort leaves is also used for prophetic or lucid dreams.

Mugwort is a protective herb. Carry some in a sachet while travelling to guard against thieves, delays, mechanical trouble, accidents, and other problems.

Hanging dried mugwort over a home’s entry points will keep evil from getting in. In old folklore, putting mugwort in your shoes was said to protect against fatigue.

Mugwort is ruled by the Moon and Venus, as well as the element of earth. Astrologically, it’s associated with Libra and Taurus.

This herb is well known as a uterine stimulant. This means that it can induce contractions and bring on menstruation. It’s sometimes used as a tea to help with difficult menstrual symptoms.

Mugwort is used in a traditional medical practice of Japan, China, Mongolia, Tibet, Korea, and Vietnam called moxibustion. Small bundles of dried mugwort are placed on certain points of the body, or on the ends of acupuncture needles, then burned. This is said to stimulate circulation in those points, ensuring a smoother flow of blood and energy.

A tea made of mugwort is a traditional treatment for internal parasites.

Mugwort has mild relaxant and antispasmodic properties. When taken internally, an infusion of the herb is said to increase the production of stomach acid, reduce gas, and improve digestion.

Possible Risks & Side Effects of Mugwort

Any herb has the potential to trigger an allergic reaction. Symptoms of an allergy can vary from contact dermatitis, to indigestion, to hay fever, to anaphylaxis. As a fellow member of the daisy family, mugwort may trigger allergic symptoms in people with allergies to ragweed.

Since mugwort is a uterine stimulant, it should not be used during pregnancy.

Mugwort contains a compound called thujone. This can cause liver damage if consumed in excess, or over a long period of time. If you choose to ingest mugwort, take breaks at least every week to allow your body to clear itself.

Mugwort may be confused with wormwood (Artemisia absinthium). While wormwood has some medicinal benefits, it has a much higher potential for toxicity when compared to mugwort. Always get a positive ID for any plant you use, especially if you plan to ingest it.

Nobody’s really sure how mugwort got its name. While the connection between beverages and mugwort seems obvious, other sources indicate that it comes from an old word for “moth,” and was named for its ability to repel insects. Still others say that it’s most likely named after the Old Norse word for “marsh,” “muggi.”

In Wales, midwives would tie bundles of mugwort to the thighs of women struggling during labor. These bundles must be removed immediately after the baby was born, however, or there was a fear that the mother might hemorrhage.

This goes back to mugwort’s properties as a uterine stimulant. Some of the compounds in mugwort can be absorbed through the skin (as anyone removing mugwort bare handed can tell you), so this may have been a way to gently stimulate uterine contractions during a labor that was taking too long.

Mugwort is mentioned in the Nine Herbs Charm, an Old English poem detailing the preparation of nine important plants:

“Remember, Mugwort, what you made known,

What you arranged at the Great Proclamation.

You were called Una, oldest of herbs,

you have power against three and thirty,

you have power against poison and contagion,

you have power against the loathsome enemy moving through the country.”

The charm is intended to be a cure for infection and an antidote to poison. Though the poem has undergone some Christian-based whitewashing, it still contains clear references to nine herbs sacred to Woden.

Getting Started With Mugwort

Before starting your journey with mugwort, it’s important to learn to identify it. One of mugwort’s many virtues is that it will grow just about anywhere where it can get enough sun. That means that you might be passing by fresh mugwort every day!

You can distinguish mugwort and wormwood by their appearance. Wormwood has silvery foliage and bigger, showier flowers. Mugwort is taller, more slender, and has green leaves with white undersides.

An easy way to work with mugwort is in dream magic. Combine it with lavender and other sleep herbs, and add it to a sachet or pillow. Squeeze the herbs and inhale their fragrance before going to sleep, and affirm your intent to have a vivid, memorable, prophetic dream.

You may also wish to use mugwort as a divinatory incense. If you’re sensitive to mind- or mood-altering substances, you may wish to work with mugwort indirectly. In this case, you can place the leaves under your scrying ball or mirror to enhance your divinatory abilities.

Mugwort has risen from a ditch and field herb to one of the undisputed powerhouses of most metaphysical shops.

Whether you grow mugwort yourself, harvest it outdoors, or purchase it dried, it’s an herbal ally that’s well worth getting to know.