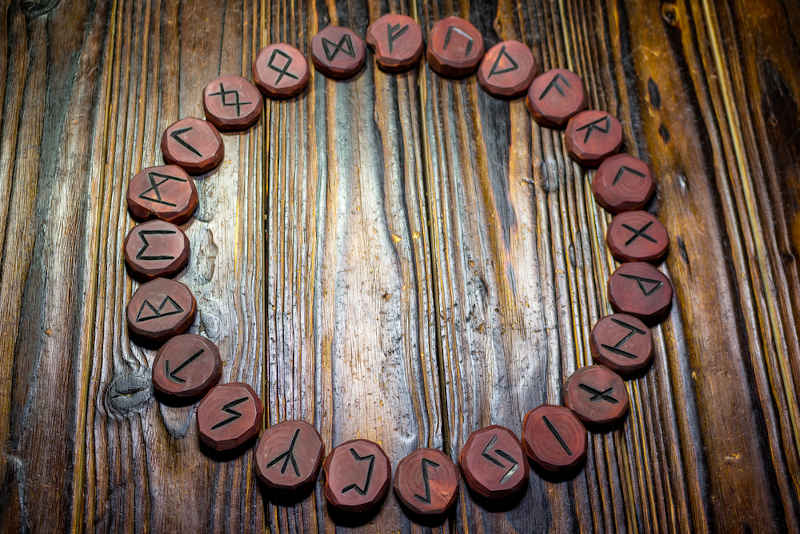 In ancient Norse and Germanic culture, runes were more than a writing system. In the Codex Regius, a collection of old Norse poems, there’s even a reference to using runes to raise the dead. The word “rune” itself may be interpreted as “secret,” hinting that the use of magic runes was restricted to the knowledgeable.

Interestingly, there’s little evidence that runes were traditionally used for divination. Most of the historic references to runes show them as a form of writing, magic, or combination of the two.

To ancient people, each rune was more than a letter — it was a pictograph that symbolized cosmic powers and forces, and inscribing a rune invoked those forces. Modern witches and Pagans have expanded the use of runes to include rune divination.

What is Rune Casting?

Rune casting is a method of divination in which stone or wooden runes are tossed onto a cloth, board, or other flat surface. The position of the runes relative to each other and the caster provides insight.

Another method of rune divination involve spreading the runes out, face down, and the diviner passing their non-dominant hand over them. The diviner will fee a subtle “pull” from the relevant runes, pick them up, turn them over, and interpret them.

Yet another method involves picking a set number of runes (usually three) out of an opaque bag, and interpreting them in the order in which they were drawn.

How does Rune Casting Divination Work?

Rune casting works just like other methods of divination using objects. Each rune has a specific meaning, not unlike the meanings assigned to tarot or Lenormand cards.

When the diviner casts or draws runes, they see which runes they have in front of them, and piece together an interpretation based on how these meanings relate to their original question.

When casting runes, the diviner pulls a small number of runes from a bag and casts them east to west. (It’s best to use a cloth for this, since the fabric will help keep them from sliding and bouncing too much.) The stones that are the most obvious will hold the answer to the question.

When a rune is upside down, this position is called “merkstave.” Some diviners interpret face down runes with their merkstave meaning.

How to Interpret Runes

Interpreting runes depends on the type of rune casting performed:

Each rune has an obvious meaning, and several deeper, less-obvious meanings. Fehu, for example, means “cattle.” Read more deeply, cattle equates to wealth, which equates to one’s standing in society.

Face up, it’s a rune of prosperity, abundance, fulfillment, and self-worth. Merkstave, it represents loss and disappointment.

Fehu is a vertical line with two shorter, diagonal lines coming off of the top half. It’s the ancient equivalent to the modern “F.”

As mentioned above, it means cattle. To ancient people, cattle were wealth, and wealth is power.

Upright, this is a rune of monetary wealth, abundance, wish fulfillment, and satisfaction.

Merkstave, it represents the opposite — loss (both monetary loss and loss of face) and disappointment. Because tending cattle requires hard work, a merkstave fehu could indicate that it’s time to put one’s nose to the grindstone.

Uruz is a vertical line with a long diagonal line slanting downward. This is the equivalent of the modern “U,” and meant “aurochs” — an ancient type of wild ox. It’s interesting that the rune that means “aurochs” doesn’t mean “cattle,” but the “wild” is the important part.

Uruz represents wild power, strength of will, and vitality.

Face up, it indicates that strength will win the day and all will turn out well.

Merkstave, it indicates weakness, lack of direction, and giving up one’s power.

Thurisaz is a vertical line with two diagonal lines joining in a sideways “v,” like the Old English “thorn.” It’s the equivalent of the modern “Th,” and means “giant.” It’s a rune of danger and destruction, but this isn’t always bad.

Face up, it indicates a stroke of luck that avoids a catastrophe, or, like The Tower in tarot, a destructive force that paves the way for something new to grow.

Merkstave, it represents losing a fight, or being crushed by an unforeseen danger.

Ansuz is a vertical line with two short, downward-slanting lines coming down from the top toward the right. It’s the equivalent of the modern “A,” and means “Deity.”

It stands for prosperity and stability, and the kind of long-term happiness that comes from things proceeding in an orderly fashion. It also stands for good counsel and written advice.

It represents movement, swift travel, and energy focused toward a destination.

This rune holds all meanings of the word “journey” — an actual trip, progress toward a goal, or spiritual growth.

Merkstave, it stands for everything that could interrupt this journey, like accidents, delays, distractions, and even death.

This rune looks like its modern English equivalent, “K,” with the vertical line removed. It can mean “torch” or “ulcer.”

As a torch, it represents the warmth, comfort, and illumination of fire. It’s knowledge, passion, and creativity. It may even represent a birth. As an ulcer, it’s the price paid for knowledge, and the pain that makes people stronger and wiser.

Gebo resembles a modern English “X,” but its equivalent is “G.”

It means “gift,” and represents a blessing, boon, or generosity.

Wunjo most resembles a modern English “P,” but is equivalent to “W.”

It stands for joy, happiness, and success.

Merkstave, it represents a lack of progress, difficulties, and obstacles.

Its meaning is “hail,” and, like hail, it’s tough times that are outside of one’s control. It’s destruction and chaos, delays and disruption.

Naudiz is a vertical line crossed by a short, diagonal slash.

It means “need,” and is equivalent to the English “N.” It’s a rune of delay, indicating unfulfilled needs and difficult learning periods.

Merkstave, it indicates rushing in to a situation unprepared.

Isaz is a simple vertical line. It means “ice,” and is equivalent to the modern English “I.”

Its traditional meaning is unknown, as historical sources with this rune are often contradictory. Its often interpreted as symbolizing a freeze, or a time to “cool one’s heels.” It’s a delay, and a cooling of passions.

Jera resembles two Kaunan runes facing each other, and is equivalent to “J” or “Y.” It means “year,” and stands for the harvest.

It’s reaping what was sown, justice, and patience. It indicates that there’s a time for all things, and the querent will receive their just desserts in due time.

Merkstave, its meaning does not change.

Eihwaz is a vertical line with two shorter, diagonal lines coming off of the top and bottom.

It means “yew tree,” and is equivalent to the English long “I.” The yew tree is Yggdrasil, strength, and stability. Its wood was used for making bows. This rune represents strength, stability, and magical protection.

Merkstave, it is confusion, destruction, and a lack or loss of stability.

Perthro resembles an angular “C,” and its modern English equivalent is “P.” Its real name and meaning are unknown — historical sources are vague on this point, but some theories say it means “cup” or “pear tree.”

In divination, it stands for mysteries and hidden factors.

When it shows up, secrets will come to light.

Algiz resembles a “Y” with a short vertical line in the center, and its English equivalent is “Z.” Like Perthro, sources are contradictory regarding its name.

It means “elk,” and stands for protection, power, and restraint. Algiz can be protection from one’s foes, or the act of protecting loved ones. It’s a rune of friendship, positive influences, and guarding those influences.

Merkstave, it counsels the querent to exhibit restraint.

Sowilo somewhat resembles an “E,” but its equivalent English phoneme is “S.”

It means “sun,” and stands for power, victory, illumination, and success. It’s victory and good health, comfort and joy.

It means “the God Tyr.” It’s victory over rivals, motivation, and fighting for what one believes in.

Merkstave, it represents a loss of motivation or defeat.

Berkanan resembles its English equivalent, “B.”

It means “birch tree.” It’s a rune of fertility, birth (either literal or metaphorical), and new beginnings.

Ehwaz looks like an English “M,” but its modern equivalent is “E.”

Its meaning is “horse.” It represents a relocation, and having faith that the change is for the better. Trust in good advice.

Merkstave, its meaning depends on the runes around it. Its meaning may not change, or it might counsel the querent to put off making changes for a little while.

Mannaz looks like two Wunjo runes facing each other, and its English equivalent is “M.”

It means “mankind.” It’s a rune of loving community, and getting support from those around you. Wunjo means “joy,” and Mannaz shows that joy comes when we turn to others for unbiased advice and a bird’s eye view of our problems.

Merkstave, it can represent isolation, and a lack of help or support.

Laguz looks a bit like an upside down version of its modern equivalent, “L.”

It means “lake,” and, like a lake, it’s deep, formless chaos. It symbolizes trusting one’s intuition, the subconscious, and messages in dreams.

Merkstave, it represents temptation and self-deception.

Ingwaz resembles a diamond, and its equivalent is the English phoneme “-ng.”

It means “the God Ingwaz,” and stands for actualization, milestones, fertilization, and an end to strife. When this rune shows up, relief is on the way.

Dagaz looks like two vertical lines with an X in the center, and is equivalent to the modern English “D.”

It means “day.” It represents hope, happiness, and growth.

Merkstave, its meaning is the same.

Othala looks like Ingwaz with two additional diagonal lines angles downward from the base. It’s modern English equivalent is the letter “O,” and it means “heritage” or “estate.”

It stands for inheritance and traditions, as well as a wealth of things that money can’t buy — friends and loved ones.

Merkstave, it can indicate frustration borne by rushing into things. Building traditions and estates take time.

Runes were originally a magical system unto themselves and, while they had meanings attached to them, probably weren’t used for divination the way modern diviners use them.

Some scholars say that rune divination is an ancient practice, but there’s a lack of evidence to back this up.

Though runes are very old, they’ve undergone multiple different interpretations, reimaginings, and implementations over the centuries.

Johannes Bureus, a Rosicrucian and Hermeticist, created a runic system based on a combination of the Futhark and Jewish mysticism in the 17th century.

In the early 1900s, Austrian occultist Guido von List wrote about a new runic system based on the Younger Futhark.

While it’s certainly possible that mystics, occultists, magicians, and witches used runes in their divinatory practices at some point, runic divination didn’t really come into the public eye until the late 20th century.

Cultural anthropologist Ralph Blum wrote the first book on runic divination in 1982, and rune casting has risen in popularity ever since.

Runes are one of the oldest forms of written alphabet, from a time when recording and transmitting knowledge was seen as magical in itself. Even though scholars are still unsure of the historical meanings of some runes, modern diviners use them extensively enough to have developed their own, new insights.

While some diviners use them alongside tarot cards and other divination tools, runes offer a beautiful perspective all their own.