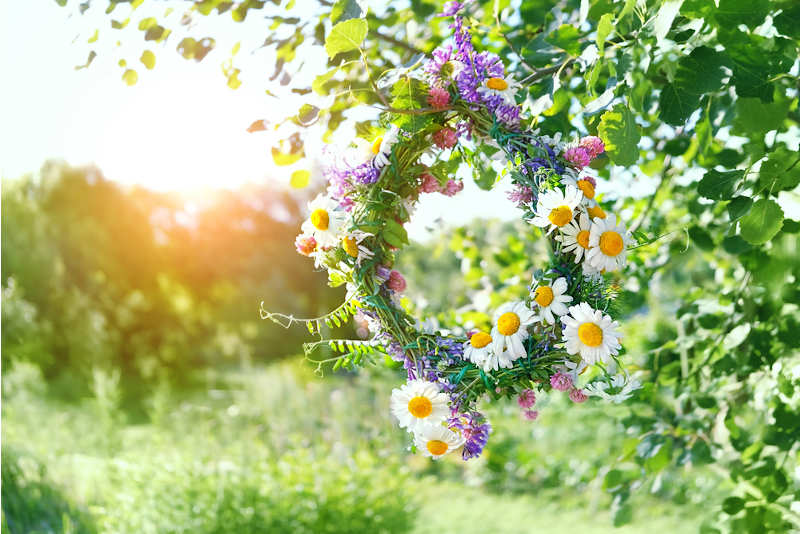 Pagans who base their practices around western European pre-Christian traditions commonly observe a set of holidays. These are often grouped together as the Wheel of the Year, which is a way of visualizing the progression of seasons and sacred days as a cycle.

Litha is a solar festival that takes place on the longest day of the year — Midsummer.

Litha is a name given to the summer solstice. In the northern hemisphere, this takes place around June 21st.

Because of the Earth’s axial tilt, this actually corresponds with the winter solstice in the southern hemisphere, so Pagans in the south typically celebrate Litha around December 21st. This is considered to be the time when the sun and solar deities are at the height of their power.

It’s hard to say when summer solstice celebrations really began. As long as humans have relied on plants and grazing animals for food, they’ve tracked the seasons.

The word “solstice” comes from Latin, and roughly translates to “sun stands still.” The solstice, then, is the point when the sun seems to stand still in the sky. In other words, it’s when the daylight hours are at their longest.

Nobody’s really certain where the name “Litha” comes from, either. One source cites a document called The Reckoning of Time (De temporum ratione) written by Saint Bede in 725 CE.

In it, he recorded a lot of Anglo-Saxon Pagan concepts, and the names of the months were among them. This time of year was allegedly named “Līða,” which translated to “gentle” or “easy to navigate.”

It was so named because this time of year marked the best weather for sailing, since the breezes were steady and not too powerful. June was Ǣrra-Līða, or “the first Litha,” while July was “the second Litha.”

Another source, Greer’s New Encyclopedia of the Occult, cites J.R.R. Tolkien’s Lord of the Rings trilogy as the actual origin. In it, the Hobbits’ called midsummer Lithe.

It’s possible that we may never find the true name of this holiday. Many of the cultures that inform modern-day European-based Paganism had strong oral traditions, and placed less emphasis on writing. As a result, the only written records left behind stem largely from invaders and other outside observers.

Traditionally, Litha was a time to light bonfires, celebrate marriages, feast, sing, and dance. It’s a time when the weather is at its warmest, and all of the crops are at their most fruitful. This is a celebration of plenty, partnership, and community.

In Wicca, it’s customary to use this time to work solar magic, magic for men’s issues, and rituals for community stability, success, environmental healing, and strengthening relationships.

In ancient Rome, people celebrated Vestalia around midsummer. This was to honor Vesta, a virgin goddess of the hearth, home, and family. Under normal circumstances, only her devotees, the Vestal virgins, were allowed into the sacred inner areas of her temples.

During Vestalia, the inner sanctums of her temples would be opened for all women to come make offerings and request her aid and protection.

In some forms of Wicca and other modern-day Pagan traditions that draw from Celtic roots, there’s a legend about the Oak King and Holly King. These two rulers are personifications of the seasons. They’re said to do battle twice a year — on the equinoxes — and their losses or victories mark the changes in weather.

The Oak and Holly King are also considered roughly analogous to multiple figures in folklore. Some of these include the Irish solar deity Lugh versus Balor, a Fomorian leader; Gwyn ap Nudd, the King of the Welsh underworld, and Gwythyr ap Greidawl; and even Sir Gawain and the Green knight.

Litha’s symbols represent the energy of the sun. It’s represented by the colors gold, green, blue, and red, flowers, fires, and the oak tree. It’s also very common to see representations of the sun, often as a stylized wheel.

The colors of Litha each have their own meanings:

As a solar festival that celebrates the sun at its peak, there are several traditional herbs and plants to include in Litha celebrations. Chief among them is the oak tree, as this time of year is when the Oak King is said to be at the height of his power. Others include:

Litha is about celebrating the power of the sun, and giving thanks for all that it brings us this time of year. Adhering strictly to traditional herbs and plants is less important than observing your environment — whatever plants, herbs, fruits, and flowers are at their peak ripeness are suitable for including in a Litha celebration.

Litha is very much a community festival, but you can still celebrate it on your own. Even if you don’t perform spellwork yourself, you can take a cue from the king of magic people tend to work this time of year.

It’s typically a time for spells for love, partnership, community, and giving thanks. To celebrate Litha, you can try hosting a community bonfire or potluck full of seasonal foods. Make sure there’s music and a place to dance!

This is also a traditional time of year for handfastings and other marriage celebrations.

It’s also a good idea to make offerings. Part of this sacred time involves honoring the gifts that the sun has brought us, so giving back is important. Leave gifts for the fae or land spirits around you, donate to mutual aid funds or other community efforts, or even offer your time to clean up a beach, park, or forest path.

If you don’t have a community to celebrate with, take this time to appreciate nature. Enjoy the warm weather on a forest walk, or just tend to your garden and houseplants. Observe the new growth, flowers, and other changes that the increased sunlight has created.

Lastly, consider setting up a seasonal altar. Find a place in your home that won’t be disturbed. Set it with a cloth in an appropriate color (or white), and place red, gold, green, and blue candles on it. Include an incense burner, and images of the sun, lush plants, or other reminders of summer.

Lastly, add a vase for fresh flowers. Find seasonal wildflowers to bring in. Light your candles and some incense, and take time to appreciate the warmth of the sun, the abundant Earth, and all that you have to be thankful for right now. If you wish, you can also pray to heal the land and strengthen your community.

Litha is a beautiful celebration of the most abundant, fruitful time of year. It’s a day for giving thanks, delighting in each other’s company, and indulging in the fruits that summer has provided.

Even if you aren’t Pagan, taking time to enjoy and showing gratitude for the sun and Earth’s abundance can be a profound experience.

A Guide to Ayahuasca