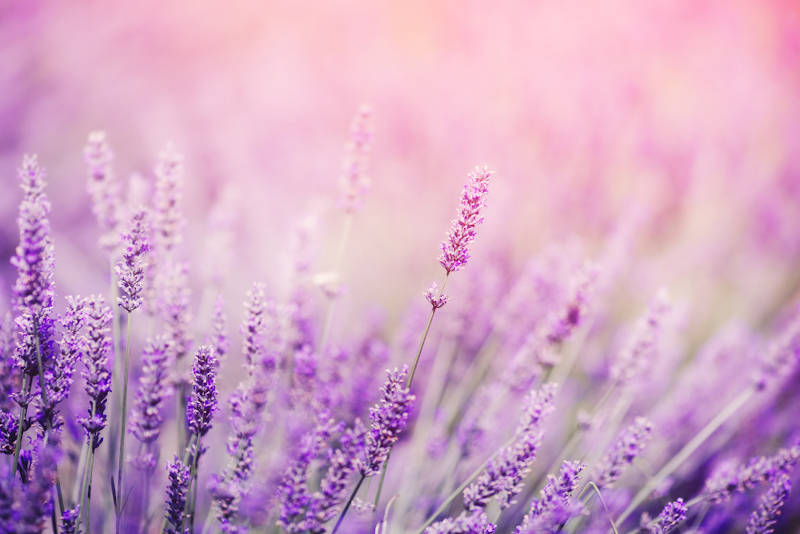 Few herbs are as ubiquitous in modern life as lavender (Lavandula). People use it for relaxation, to keep moths away, to freshen linens, to flavor desserts, and as a decoration.

This isn’t a new trend, though — lavender has been a staple for herbalists, witches, and healers alike for ages.

Lavender is commonly dried, bound together in herb bundles, and burned to cleanse an area of negative energies and draw peace. Because it’s so versatile, lavender can easily be combined in bundles with other herbs for this purpose, like rose or rosemary.

Lavender is traditionally used in rooms where new babies are born to cleanse the energy, welcome them into the world, and protect them.

Steep dried lavender in hot water, strain out the buds, and add the liquid to a tub of hot water for a purifying bath.

Wearing a sprig of fresh lavender is a traditional Tuscan amulet against the evil eye.

Since it’s associated with love and peace, lavender is often used to repair marital problems, smooth over rocky relationships, and soothe arguments. Lavender is also said to be a favorite for attraction spells for gay men.

Lavender is ruled by the planets Mercury and Neptune, and the elements air and water. Astrologically, it’s ruled by Virgo and Pisces.

As a healing herb, lavender is most commonly used for relaxation. It contains linalool and linalyl acetate, both of which have mild sedative, anti-inflammatory, and antioxidant effects.

The volatile compounds in lavender can also modulate gamma-aminobutyric acid binding to receptors in the brain, which helps decrease anxiety.

Studies have found that using lavender increases theta and alpha waves in the brain, signaling relaxation.

Lavender is also used topically as an antibacterial, anti-inflammatory, and anti-aging treatment. It can be applied topically for acne and visible signs of aging.

Possible Risks & Side Effects of Lavender

Like any herb, allergies are possible. If you work extensively with essential oils, sensitization is always a risk.

The symptoms of allergies can range from rashes to anaphylaxis. If you have an allergy to lavender or any of its relatives, you should steer clear of this herb and find a suitable replacement.

When taken internally, lavender may possibly cause nausea, stomach ache, or constipation.

One study determined a possible correlation between lavender oil and gynecomastia in young boys. Regardless of the potential link, essential oils should not be used on young children.

Lavender was much-beloved by the Romans, from who it gets its name. The word “lavender” comes from “lavare,” meaning “to wash,” and it was often steeped in bathing and washing water for its distinctive fragrance.

In ancient Rome, a pound of the flowers sold for as much as a farm laborer’s entire wages for a month.

From Rome, it spread to western Europe. In Portugal and Spain, it was traditionally burned or strewn on the floors of churches on St. John’s Day to chase away evil spirits. Elsewhere, it was burned on bonfires in Midsummer.

Lavender is purported to be one of the ingredients of the infamous Four Thieves’ Vinegar. This was an herbal wine concoction that supposedly either allowed a group of thieves to rob the homes of plague victims, or kept them from catching the plague when they were ordered to bury the dead as part of their sentencing.

The herb’s association with love comes from the 15th century. Young women would sip on lavender tea to induce prophetic dreams of their true loves, while young men would tuck sprigs of it under their pillows for luck before asking women to marry them.

Interestingly, most of lavender’s loving properties point to a very chaste, devoted love — married women would use the herb to keep their husbands faithful, and young people would combine it with rosemary to maintain their chastity. That said, lavender also became a trademark of sex workers!

Getting Started With Lavender

You can even start with lavender-scented bath products, as long as their scent comes from genuine lavender extract.

One fun product for beginning witches is a dream pillow. Place two rectangles of fabric together, wrong side out. Sew them together on three sides, then turn them right side out. This will form a rectangular pouch.

Fill the pouch with lavender, or a combination of lavender, mugwort, and other dream herbs, and sew the opening shut.

Hold the pillow in both hands, and visualize it filling with a calming energy. If you like, you can speak your intent for the pillow out loud, or recite it silently in your mind.

You can also charge it under the light of a full moon. When it’s ready, place the pillow on your bed. Before sleeping, pick it up, squeeze it, and inhale its fragrance. Speak your intention to have pleasant, prophetic dreams.

Lavender is one of the world’s best loved herbs. Though it got its start in a relatively small geographic area, it’s now cultivated pretty much everywhere it can possibly grow.

Its floral, slightly camphoraceous scent is known and beloved by millions, and herbalists, witches, and wise people the world over recognize its usefulness as a magical and healing herb.