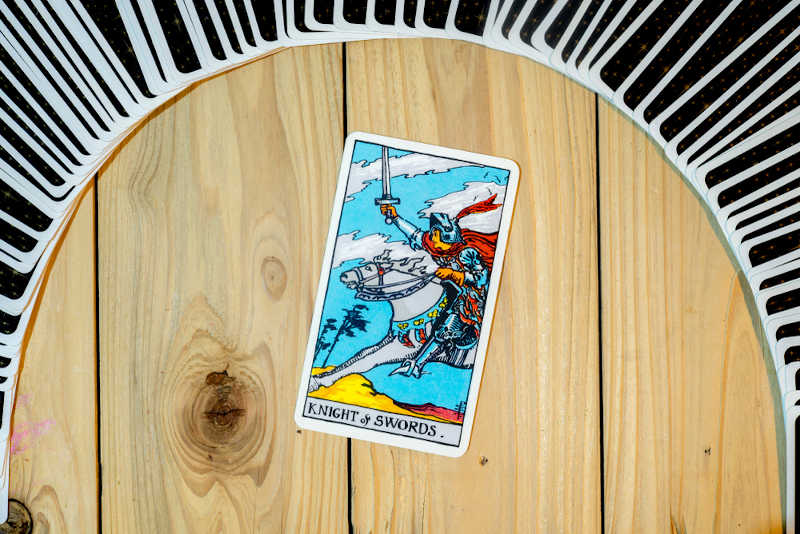 The suit of Swords is tied to the element of Air. It discusses all things related to logic, the intellect, and conscious thought.

The Knights, meanwhile, embody action and movement. When you put the two together, the Knight of Swords becomes the Minor Arcana’s symbol of impulsiveness, assertiveness, and courage.

About Knight of Swords

The Knight of Swords personifies movement even more than the other Knights. Air moves quickly, so the suit of Swords generally describes rapidly changing situations.

This is represented by the Knight himself — he’s wearing full plate armor and is charging into battle, sword upraised, on the back of a galloping white horse. His overcoat is decorated with images of birds, matching the birds and butterflies on his horse’s tack.

This card’s background is full of more Air imagery. The land is mostly barren and windswept, lacking the dunes that represent the element of Fire. There are a few trees, but their branches wave as if buffeted by a strong breeze. The sky is blue, but full of streaky white clouds that skid on the wind. Looking at the scene, you can tell that the Knight is riding headlong into a strong wind.

The suit of Swords represents thought, movement, and action, but the weight of these characteristics varies between the court cards. The King and Queen are the most mature and balanced, able to temper this suit’s negative characteristics with more positive ones.

The Pages are immature, but also weaker and easily influenced by the cards around them. The Knights, however, are strong and impulsive. The Knight of Swords embodies the full power of this suit, but sometimes lacks sense. For example, he’s charging into battle, but lacks the good sense to put the visor of his helmet down!

When upright, the Knight of Swords brings change. Air blows quickly, so, in terms of timing, you could be looking at results within days. This change is likely to be positive, but you’ll need to be brave and quick-thinking in order to take advantage of the opportunities it offers you.

As a face card, the Knight of Swords can also signify a specific person. If that’s the case, this person is likely to be between the ages of 20 and 39, born under an Air sign (or with a lot of Air placements), and intelligent, courageous, and very direct. They may be a soldier or someone else involved in a dangerous profession.

Reversed, the Knight of Swords’ horse stumbles. He indicates changes that bring upheaval instead of opportunity, or opportunities that you fail to seize. You might feel like you’re in over your head, disorganized, unable to control the situation, or looking for someone else to lead you.

You might want to charge into a situation, but not have any idea how to actually proceed. Sometimes, he indicates the suit of Swords’ energy to an extreme, which can result in being emotionally distant, tactless, or cynical to a fault.

As a signifier, the Knight of Swords reversed can represent a person between the ages of 20-39 who is born under an Air sign, and is impulsive, haughty, and sarcastic. In some cases, this person may use their perceived intellectual superiority to bully or deceive others.

For relationship readings, the Knight of Swords isn’t a great omen for commitment. This card represents change over stability, and seizing opportunities over preserving harmony.

In some contexts, it may represent steeling your nerve and proposing to your partner. In others, it might stand for wanting to end the relationship and pursue other adventures.

The suit of Swords describes intellect over emotions, so it’s not a great card for gaining deep emotional insights. Look to the cards surrounding this one for more context about your specific situation.

If you’re single, this card can indicate a whirlwind romance that you may not see coming. Your next partner may sweep into your life, and leave it just as quickly.

The Knight of Swords can also indicate a potential romantic partner between the ages of 20 and 39 who is born under an Air sign, and is very brave, adventurous, and intelligent.

If the Knight of Swords upright indicates a change in your relationship, then he becomes a near disaster when reversed.

The Knight of Swords reversed warns you that you or your partner may turn out to be controlling, bullying, or even abusive. You might feel that you lack control in your relationship, or your thoughts and feelings aren’t taken into account.

For single people, the Knight of Swords reversed can represent a difference of opinion on romantic matters. You might be pursuing someone who isn’t interested, or vice versa.

It can also depict a potential romantic partner who’s between 20 and 39 years old, an Air sign, and potentially aggressive. They might seem adventurous and exciting at first, but things can turn dangerous very quickly.

In a career and business context, the Knight of Swords is encouragement. You have the ambition and intelligence that you need to succeed, so there’s no sense in being meek about it.

When an opportunity presents itself, take it! This might mean changing employers, fields, or even moving far away, but it will be worth it in the end.

For money readings, this card is generally a good sign. You may see some smart investments paying off soon.

When reversed, the Knight of Swords can represent imposter syndrome. You might feel like you’re not actually qualified for your position, which keeps you from advancing and drawing attention to yourself.

On the other hand, this card can also indicate that you’re overestimating your abilities. Pay attention to the cards surrounding this one, and how your co-workers treat you.

If you come across as overbearing or arrogant, then you’re going to have a harder time working successfully with a team. Remember: The people you climb over on your way up the ladder to success are the same people you see on your way back down.

Financially, the Knight of Swords reversed indicates missed opportunities, reckless spending, or confidence tricks. Someone around you might be behaving deceptively in order to scam money from people. Be careful who you trust with your financial future.

Knight of Swords: Yes or No?

The Knight of Swords can represent a “Yes” in a “Yes or No” reading. While he’s a very assertive figure with a rebellious streak a mile wide, he still represents a brave champion who’s willing to charge in and do what’s necessary. You’ll most likely get the results you want, but it will require some bravery and willingness to seize the moment.

If he’s reversed, the Knight of Swords is a “No.” This card indicates missed opportunities, tactlessness, and purposeless aggression. You might be trying very hard to get a certain outcome, but your approach isn’t going to work the way you want it to.

The Knight of Swords is dashing, courageous, and smart. At his best, he’s a very intelligent figure, with an innate ability to see opportunities that other’s miss and the cleverness to take advantage of them. At his worst, he may be arrogant, cold, and calculating.

Pay attention to how he appears in your readings, and look very closely at the cards that arrive with him.