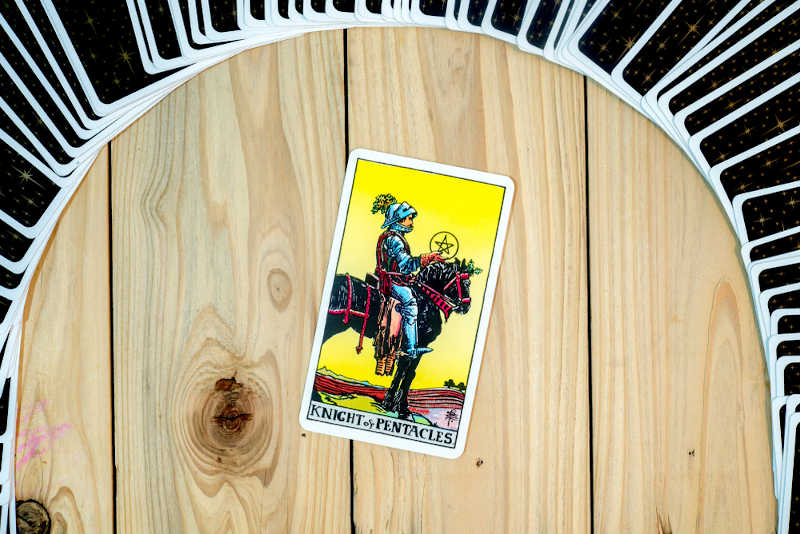 In the court cards of the Minor Arcana, Knights are the “doers.” They embody the unchecked energy of their suits, for good or ill, and are all about change, movement, and action.

In some suits, this is more pronounced than others. Air, for example, is a “quick moving” element, so the suit of Swords represents very rapid change. Earth, which is represented by the suit of Pentacles, is slower and more deliberate.

The Knight of Pentacles is about patience, practice, hard work, and adapting to change by having a plan.

About Knight of Pentacles

In the Rider-Waite-Smith tarot, the Knight of Pentacles is a unique figure. Unlike other Knights, he isn’t mounted on a charging horse — his black horse stands still, ready and waiting for the right time to move.

This is backed up by the scenery in the background. Rather than an empty desert, flowing river, or wind-swept plain, there are tilled fields. The Knight of Pentacles hasn’t even left home; he’s choosing to protect the long-term safety and security of his home base.

The Knight’s armor and attire emphasize his connection to the element of Earth. He wears full plate armor, just like the other Knights, but the plume on his helmet resembles lush greenery.

A similar plume decorates his horse’s bridle. His horse’s tack also has what appears to be an adornment shaped like a small bunch of grapes hanging from the end. It’s hard to tell what the Knight’s overcoat looks like, but it seems to be a deep wine-red, like red grapes.

In one hand, he holds his horse’s reins. In the other, he holds a single golden pentacle.

As a general rule, the Knight of Pentacles represents the virtues of planning and working toward a goal. He may also indicate conservation, sustainability, common sense, and good stewardship.

While he is ambitious, he goes about things in a different way when compared to the other Knights. If you have an idea that you’re excited about, the Knight of Pentacles advises you to take a slow, practical approach. If you plan well, you can handle any changes that come your way.

As a face card, the Knight of Pentacles often signifies a person. This person will most likely be between the ages of 20 and 39, born under an Earth sign, and have dark hair or a dark complexion. They will be practical, reliable, and conscientious.

When reversed, the Knight of Pentacles takes on more of his negative aspects. In some cases, he can represent being the opposite of practical and methodical — that is, being hasty and impulsive.

He usually indicates being stubborn, rigid, and adhering too strongly to tradition “just because.” He may be cautioning you to finish what you start, and avoid getting caught up in greed or materialism.

The Knight of Pentacles reversed can also signify a person. They’ll likely be an adult between 20 and 39, have an Earth sun sign, and dark hair or skin. This person will most likely embody more of the negative aspects of this card, including impulsivity, instability, and materialism.

In love and relationship readings, the Knights can represent either people or situations. As a situation, the Knight of Pentacles is an omen of a stable, committed partnership where both people work toward a common goal.

As a person, he may signify that you or your partner are demonstrating reliability, patience, and practicality. This Knight is a good omen for a very comfortable life and a strong sense of security — the kind of person who protects and provides for the family.

For single people, he may represent the beginning of a long-term relationship. He can also indicate that you’ll meet someone through work or volunteer efforts.

Sometimes, he signifies a potential love interest who’s an adult, dark haired or complected, and a loyal, sensible hard worker.

When reversed, the Knight of Pentacles isn’t a great sign for the longevity of a relationship.

As a situation, he describes a partnership that’s unstable, lacks security, or doesn’t have a strong foundation. He may also indicate that both partners don’t share the same vision for the relationship.

As a person, he can signify that you or your partner are acting irresponsibly or showing disloyalty. In some cases, someone may be slipping into workaholic habits, not paying as much attention to their family as they should, or only interested in their partner as a way to gain more money, fame, or social status.

If you’re single, then the Knight of Pentacles can indicate that you’re not quite ready for a long-term relationship yet. There’s nothing wrong with this, but it could be due to something as innocuous as a love of freedom, or as sinister as old emotional abuse. Look to the surrounding cards for more context.

The Knight of Pentacles can also signify a potential romantic partner. Be careful here, since this person may not be stable, loyal, or really interested in having a commitment to you. They may be after money instead.

When it comes to careers and business, the Knight of Pentacles is a good sign. You have big dreams, but you’ve also got the good sense to prepare and plan for them. It may take a while, but your hard work will pay off and be recognized.

Sometimes, this card can represent careers that deal with the element of Earth. Think farming, landscaping, conservation, or the financial sector.

In money readings, the Knight of Pentacles indicates that you’ll be profiting off of long-term ventures. Hard work, frugality, and low-risk investments will pay off for you. It’s a good time to focus on building your financial security for the future.

If the Knight of Pentacles appears reversed, then the career and business picture isn’t quite so rosy. You might have a lot of ambitions, but expect to achieve them without putting in the requisite work.

You might be slacking off right now, or, alternatively, focusing so hard on work that it’s negatively impacting the rest of your life. You may be caught up in the idea of earning a big paycheck, which has shoehorned you into a career that you find stressful and unfulfilling.

Financially, the Knight of Pentacles is a pretty bad sign. You’re likely to incur losses right now, most likely through reckless spending, high-risk ventures, gambling, or a sudden expense that you didn’t plan for. Caution is advised.

Knight of Pentacles: Yes or No?

The Knight of Pentacles represents a conservative approach that relies on patience and planning to achieve success. In a “Yes or No” reading, he usually represents a “Yes.” Your progress toward your desired outcome might be slow, but you’ll get there.

If the Knight of Pentacles is reversed, he indicates a lack of patience or care instead. This isn’t a good sign for your query, so he represents a “No.” Things probably aren’t going to turn out well here.

The Knight of Pentacles is the Knight with the slowest pace. While he isn’t charging into adventure like some of his brethren, he is a great omen for any situation that benefits from practicality, a sensible approach, and long-term planning.