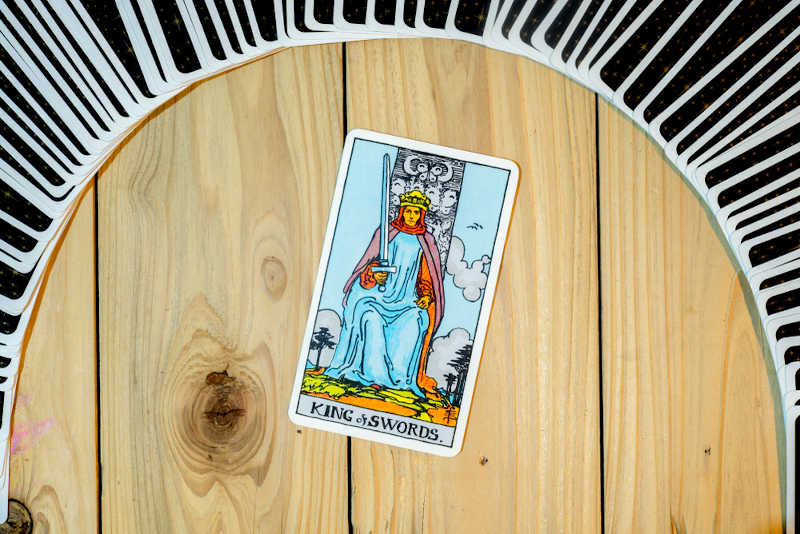 The King of Swords is a very stern, cool-headed figure. As one of the sovereigns of his suit, he embodies all of the traits of its ruling element, Air. This means that he is a consummate intellectual, who rules with logic and reason.

He advocates routine and a methodical approach, and his advice can be very valuable.

About King of Swords

In the Rider-Waite-Smith tarot, the King of Swords is a powerful representative of his element. His clothing, throne, and even surroundings are suffused with airy images.

His throne is made of stone, but the back is adorned with images of butterflies, winged figures, and crescent moons. Behind it, you can see a sky with puffy white clouds, with a silhouetted pair of birds. The ground is a windswept plain, set with small groves of tall trees.

The King wears a gray cloak lined with red (evoking intense passions hidden under a cool, logical exterior), over a loose-fitting blue gown nearly the same shade as the sky. His clothing is light, breezy, and flowing. His crown is vaguely cloud-shaped, decorated with images of angels.

In one hand, he holds a sword. His free hand rests on his lap. He gazes forward at the viewer with a sense of firmness and focus.

When upright, the King of Swords indicates that you’re in a logical, methodical phase. You may be in a position of authority right now, which requires you to make decisions with your head instead of your heart.

In an advice position, the King of Swords recommends acting with integrity and maintaining a strong ethical code.

As one of the court cards, he may serve as a signifier. In this case, the King of Swords is most likely an older masculine figure, born under an Air sign, who is very intellectual, analytical, and witty. He may have a career in civil or criminal justice.

When reversed, the King of Swords shows his negative side. All elements have their virtues and vices, and Air is no different. In this context, he may represent a state of mind that’s overly cold, divorced from emotion, or power hungry.

He may also represent losing your cool, succumbing to your temper, or a lack of self-discipline and willpower. If you are in a position of authority right now, he warns you not to let it go to your head.

As a signifier, he may represent an older masculine figure who is born under an Air sign. This person is most likely either cold, cynical, and sharp-tongued, or irrational, of mediocre intellect, and overconfident in their abilities.

In a love and relationship reading, the King of Swords is a mixed omen.

On one hand, Air rules communication — you and your partner may be very communicative and strongly bonded on an intellectual level. On the other, intellect is often regarded as the opposite of emotion, so you may find that your relationship isn’t at its most passionate right now.

The Kings are often viewed as father figures. If you’re planning a family, this may be a good omen for conception or adoption.

If you’re single, then the King of Swords says that you might be happiest with someone with whom you’re able to connect over intellectual pursuits. You’re likely to have high standards for yourself and a potential partner, and this is good.

As a signifier, the King of Swords may represent a potential romantic partner. This person is most likely older, masculine, and born under an Air sign. They will be very clever, analytical, witty, and likely to have high standards for a relationship.

When the King of Swords is reversed in love and relationship readings, it’s not a good sign. You or your partner may be feeling cold, emotionally distant, or irrational right now.

There might be issues with communication, and you may find that your emotions are getting the best of you. Be careful here — at its worst, this card can be an omen of manipulation or abuse.

For singles, the King of Swords reversed can indicate lowering your standards, emotionally falling for people who are objectively bad for you, or being too emotionally unavailable for a solid relationship right now.

As a signifier, the King of Swords reversed often represents a prospective love interest. They may be older, masculine, an Air sign, and potentially erratic, chilly, and manipulative. Be very careful.

In career and business readings, the King of Swords represents methods, analysis, and logic.

You may be in a position of authority right now that gives you a lot of decision-making power. This card advocates using a fair, objective approach. This card may also represent a boss or supervisor who models honesty and integrity for their employees.

If you’re looking for a job, the King of Swords may indicate a career in justice or a STEM field.

Financially, the King of Swords upright indicates that you will find success with a structured, methodical approach. Save and pay down debt on a regular schedule, and invest only in well-researched, transparent ventures.

Reversed, the King of Swords indicates a lack of structure and routine. You might be trying to meet expectations that aren’t clearly set, or struggling to adapt to a chaotic, illogical atmosphere.

He can also represent an authority figure who is temperamental, often loses their cool, and lacks integrity. You’re likely to be under a lot of stress right now, and this card suggests that establishing a routine and set of expectations and boundaries will help.

In a money reading, the King of Swords reversed can indicate reckless spending or a lack of self-discipline. This card may also be an omen of expensive legal trouble.

Be sure that all of your ventures are above reproach, and that you’ve done everything possible to protect yourself.

King of Swords: Yes or No?

Interestingly for such a powerful figure, the King of Swords doesn’t really give a straight answer in “Yes or No” readings. This card represents wisdom, fairness, and impartiality — he’s good at seeing all sides of a situation, and represents a “Maybe.”

Reversed, he’s not quite as fair. Instead, he’s irrational, oppressive, and judgmental. The answer in this case is most likely a “No.” You will not get what you desire from this situation.

Out of all of the Kings, the king of Swords is the one who is the most objective and rational.

When upright, he uses this power for good — he acts with integrity and honesty, and is able to be an example to his subjects.

Reversed, his powers descend into excess. Instead of rational, analytical, and honest, he can become tyrannical, assume all of his feelings are the objective truth, and use his intellect to manipulate others.