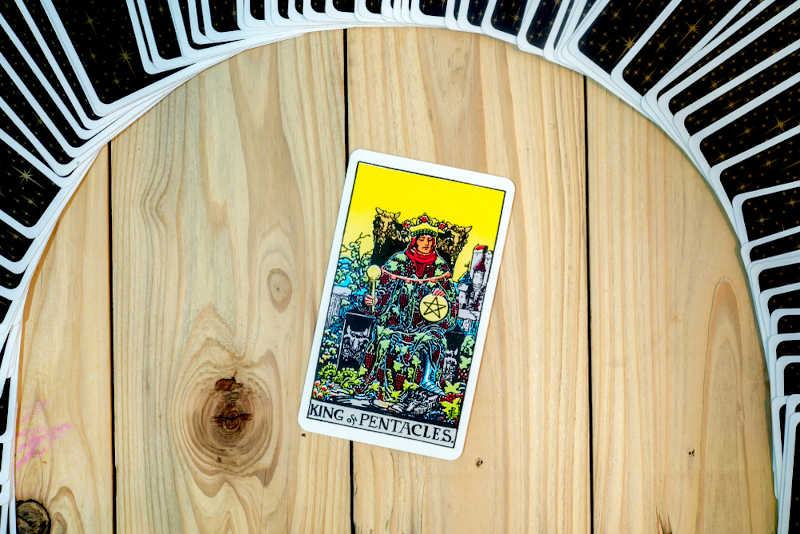 The King of Pentacles embodies all things related to the element of Earth. If it has to do with wealth, security, or growth, it falls under his domain.

He is more mature than the Page, less impulsive than the Knight, and serves as the masculine balance to the Queen.

About King of Pentacles

In the Rider-Waite-Smith tarot, the King of Pentacles is a very sensual figure. While sensuality is typically associated with the element of Water and suit of Cups, he is a person who greatly enjoys material comforts and luxury. His voluptuary sensibilities are illustrated in everything around him, from his location, to his attire, to the relaxed expression on his face.

The King of Pentacles sits on a stone throne caved with images of bulls and fruiting vines. Bulls are a creature of Earth and represent Taurus in the zodiac. Taurus is an Earth sign, and is associated with protectiveness, loyalty, stability, and a love of comfort.

This throne appears to sit in front of a low wall — either at the top of some kind of tower, or at the edge of a large window. Through the window, we can see an expanse of yellow sky and a town or castle in the distance.

Unlike the other Kings, who appear in wild landscapes that represent their elements, the King of Pentacles is close to his people. His focus is on his domain and subjects.

There are flowers, vines, and bunches of grapes all around him.

His clothing also emphasizes his earthy and luxurious traits. He wears a golden crown adorned with red flowers, and a black gown covered in plump purple grapes. One leg peeks out from under the hem, and it shows that this King is anything but a passive ruler — he’s secretly wearing full plate armor beneath his fine clothing!

He holds a scepter in one hand, and a golden pentacle rests under the other. His gaze rests comfortably on the pentacle, as if enjoying its shine and the security and wealth it represents.

In a nonspecific tarot reading, the King of Pentacles upright can represent the fruits of hard work and good planning.

These might not necessarily equate to material wealth — he also represents diligence in efforts to improve yourself. You’re likely to be enjoying a greater level of comfort and social status when he appears.

As an advice card, he advocates patience, persistence, and level-headedness.

Since he’s one of the court cards, he may sometimes represent an actual person in your life. If so, this person is likely older, masculine, and born under an Earth sign. This person is also likely to be loyal, protective, practical, and a very good parent.

When reversed, the King of Pentacles may indicate that you haven’t approached your situation with common sense, pragmatism, and patience, and, as a result, things are spiraling out of control.

You may find yourself falling short of your goals at this time, or making a series of poorly thought-out decisions.

The King of Pentacles reversed can also represent someone who has a lot of money, but lacks a work ethic or self-discipline. Instead, they think that their money alone is a sign of their innate superiority. This kind of person is sometimes said to be “born on third base, and think they hit a triple.”

As a signifier, the King of Pentacles reversed may portray someone who is mature, masculine, an Earth sign, and overly conservative, stubborn, and rigid in their beliefs. They may also be miserly, and hypocritically attempt to enforce rules on others that they don’t follow themselves.

In love and relationships, the King of Pentacles is a good sign. He’s a very loyal, stable figure, who’s good at providing a comfortable life for those he cares about. Chances are, you or your partner are currently in this mindset as well.

His appearance is a very good sign for anyone hoping to buy a house, grow their family, or otherwise put down roots for a stable, committed existence together.

The suit of Pentacles isn’t typically associated with emotions, but that doesn’t mean that this King doesn’t have them. The King of Pentacles is someone whose “love language” is closer to gifts and acts of service rather than grand romantic gestures. If you’re looking for signs of your partner’s love, they’re there.

As a pregnancy omen, he’s a very good sign. The element of Earth is associated with growth and fertility, and the King of Pentacles is often viewed as a caring, protective father figure.

For single people, this card can represent a desire for a loyal, committed partner. It may be that you’re looking forward to settling down with someone you can spend the rest of your life with.

The King of Pentacles may also represent a potential partner who is older, masculine, and born under an Earth sign. This person is likely well-off, protective, and loyal. They may be looking for a very conventional, traditional partnership.

If the King of Pentacles shows up upside-down in a love and relationship reading, things probably aren’t in a great spot right now.

You or your partner may be having trouble expressing your feelings, or even knowing whether you want the relationship to continue. You might lack comfort and security right now, which is making you antsy.

On the other hand, this lack of security may also manifest as behavior that’s rigid, stubborn, or possessive. When things aren’t as stable as they should be, it can make people become controlling in an attempt to “fix” things.

As a pregnancy omen, the King of Pentacles reversed isn’t a good sign. He typically represents an absent or neglectful parent.

For single people, the King of Pentacles reversed can represent seeking out a relationship in order to provide security or stability. These aren’t good reasons to try to find a partner, and may make you easily exploited by someone manipulative.

As a potential love interest, the reversed King of Pentacles signifies someone who is older, masculine, an Earth sign, and controlling, jealous, neglectful, and potentially financially abusive.

The suit of Pentacles is referred to as the suit of Coins in some decks, so it’s probably no surprise that it’s got a lot to do with careers, business, and cash. The King of Pentacles is a good omen for all of these things.

In a career and business sense, he represents diligence, patience, and loyalty. He is emblematic of hard work that pays off, and well-earned awards and promotions. You might be in a leadership position right now, in which case you’re likely very generous with your time and expertise when it comes to mentoring others.

Sometimes, this card can signify someone you work with who acts as a mentor toward you.

If you’re looking for a job, the King of Pentacles indicates that you may find happiness in a field related to the financial sector or agriculture.

In financial readings, the King of Pentacles symbolizes wealth and abundance. You’re likely to enjoy a good degree of security at the moment as a result of your hard work and careful planning.

Don’t rock the boat here — remember what got you to this point, keep it up, and use your good fortune to help others.

Reversed, the King of Pentacles is nearly disastrous in a career or business reading.

This card can also indicate that you’re in a field that doesn’t interest you, which makes it difficult to put in effort.

As a signifier, the King of Pentacles reversed can indicate a boss or supervisor who is greedy, unhelpful, and rigid.

For money readings, the reversed King of Pentacles represents losing money through poor planning or a lack of responsibility. He may also show that you have more than enough money to take care of yourself, but are hoarding more wealth for no reason.

King of Pentacles: Yes or No?

The King of Pentacles is all about success and fruitfulness. He’s generally a good sign to get in any tarot reading, including a “Yes or No” query. For the most part, the answer is “Yes.” He represents good things, and so you’ll get the outcome that you want here.

If the King of Pentacles is reversed instead, he’s a very firm “No.” Rather than representing abundance, success, and security, he’s a herald of corruption and instability. There’s not a lot of good to be found here, so your outcome probably won’t be very good either.

The King of Pentacles is strongly associated with protection, preservation, and stability. He’s the consummate provider, loyal worker, and diligent guardian.

When he appears, he advises you to approach your problems with patience and care if you want to meet with success.