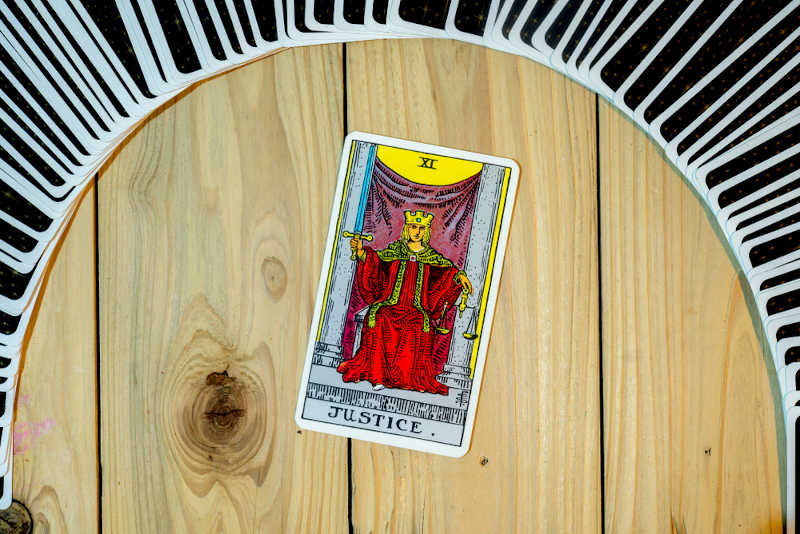 As a tarot card, Justice is almost self-explanatory. It lacks a lot of the opaque symbolism of many of the other cards, and can often be interpreted as exactly what it says: justice.

With that in mind, applying this card to different readings and situations can be a bit of a challenge.

Justice is considered part of a loose troika with Temperance and Strength (formerly Fortitude). These were held as cardinal virtues.

In the Rider-Waite-Smith deck, Justice appears as a seated figure in a red robe. They hold a sword in their right hand, and a scale in their left. They sit on a stone throne in front of two stone pillars, akin to The Hierophant and The High Priestess. A burgundy curtain spans the distance between the pillars.

This imagery of this card is fairly straightforward. The figure of Justice wears a crown and holds a sword, symbolizing authority. The suit of Swords also represents intellect and logic, suggesting objectivity. The scales are a symbol of balance.

Put together, the message is one of objective, unbiased, balanced fairness that will not be questioned.

Upright, Justice is neither a good nor bad omen. It simply is. Nobody can escape all of the consequences of their actions — how have yours contributed to your current reality?

If you’re in a legal battle, then Justice indicates that there will be a fair outcome. This will probably be good news, unless you’re guilty.

As advice, Justice upright counsels you to speak the truth and maintain balance in your life. Remember, the choices you make today will shape your tomorrow. The truth will come out eventually.

When reversed, Justice indicates unfairness, prejudice, and bigotry. It indicates that a situation won’t have a balanced, just outcome. You might take the blame for something that isn’t your fault, and there may not be much you can do about it. All you can do is stay on an even keel, and trust that the truth will eventually absolve you.

This card can also indicate dishonesty, either with others or yourself. You might be trying to avoid the ramifications of your past, but the guilt is eating at you.

In any context, Justice reversed asks you to take a look at what you might be trying to escape from. How can you repair the damage you’ve caused to others? What choices can you make today to ensure a fairer, more balanced, restorative future?

In a love reading, Justice upright is all about fairness. When it comes to relationships, you often get out what you put in.

If you’re single, don’t make the effort to meet other people, don’t make any efforts toward self-improvement, or hold unrealistic standards for a potential partner, then Justice upright indicates that you’ll receive a fair outcome for these choices — even if it’s one you may not like.

On the other hand, if you’re kind, respectful, make efforts to better yourself for your own sake, and go out of your way to broaden your horizons, this investment of energy will pay off.

Justice depends entirely on your actions. You reap what you sow. If you take the time to nurture a positive relationship, you’ll receive one. If you don’t, you won’t. It’s not always a good card to get, but it’s fair.

When Justice appears reversed, it’s highly likely that somebody’s been lying. You may have been caught behaving dishonestly or suspect that your partner has. This card may also indicate that there have been a lot of arguments that don’t seem to go anywhere. You may even feel that you’re not being treated fairly.

Justice reversed advises you to take an objective, balanced look at your position right now. Are you investing yourself in someone who won’t do the same to you? It might be time to stop watering dead flowers.

If you’re single, then this can be a sign that your search for a partner doesn’t feel fair. Sometimes, that’s just how things are.

Other times, this may be due to the way we present ourselves, or the standards we have for a potential partner. It might be time to take a fair look at what you offer, what you desire, and what you need to do to continue on.

Justice often appears upright in a career or business reading when your work and life balance is starting to suffer. It may also point to work disputes that will be resolved fairly.

In an advice position, it’s a reminder to act with integrity in all of your business dealings if you want to be successful.

In a money reading, Justice indicates balancing your income and expenses. As with career and business readings, it’s also a reminder to act with integrity around money.

If you try to dodge taxes, paying workers, or other necessary expenses, you’ll be caught eventually. Remember: Justice isn’t always a good omen, but it’s a fair one.

Reversed, Justice can show that you’re not being treated fairly at work. Your co-workers might try to “throw you under the bus,” or your supervisor might put the blame on you for something you didn’t do.

This is wrong, but, unfortunately, there’s not a lot you can do about it right now. Attempting to put things right isn’t likely to work out in your favor at the moment.

Sometimes, this card may highlight a time when you acted dishonestly or partook in some shady business dealings. The universe hasn’t forgotten about this — you can either attempt to fix the situation now, or deal with the guilt and possible consequences of your actions.

Financially, Justice reversed serves as a warning. Now isn’t a great time to take financial risks, especially if they involve other people. Those other people might not be entirely honest, and you’ll be stuck holding the bag.

Justice: Yes or No?

Justice can be a little frustrating to get in a “Yes or No” reading. Like many cards that deal with fairness and objectivity, it doesn’t provide a straight answer. It doesn’t say “Yes” or “No,” it simply implies that you’re going to get what you deserve. It’s up to you to determine what this means in the context of your question.

If Justice is reversed, then the answer is probably “No.” In this orientation, the card represents unfairness. The outcome you want (or feel you deserve) probably isn’t what you’re going to get.

Justice is a very situational card. For those who act with honesty, integrity, and kindness, Justice upright can be a very positive omen. For those who are dishonest or cruel, it’s the opposite.

No matter how or where it appears, it always reminds us to display the cardinal virtue of justness. Treat others fairly, avoid dealing with dishonest people, and you’ll rarely have much to worry about.