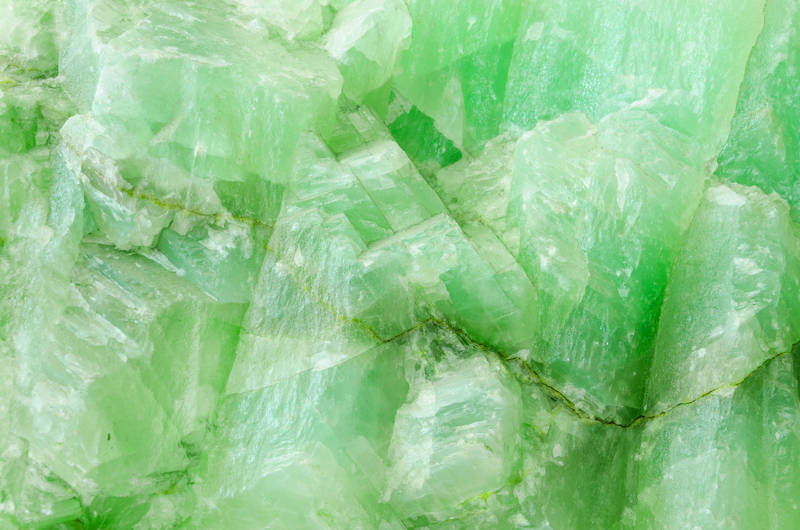 You don’t need to be a gemologist to recognize jade. This familiar stone features heavily in East, South, and Southeast Asian jewelry and carvings, as well as Mexican and Guatemalan cultural artifacts.

What many people don’t realize, however, is just how long humanity’s history with jade goes. Where some stones have never been culturally significant, few materials are as inextricably intertwined with civilization as jade.

When they hear the word “jade,” most people picture a pale to deep green stone with a waxy luster. Really, jade is actually a catchall term for two completely different minerals: Nephrite and jadeite.

Nephrite is a calcium, magnesium, and iron-rich type of amphibole. It can be translucent white, yellow, brownish gray, or any shade of green.

Jadeite is a sodium and aluminium-rich type of pyroxene mineral. It can be white, any shade of green, blue-green, pink, or light purple, among other colors. Both minerals are found all over the world in varying levels of abundance.

Physically, jade is used for youth. Skin massagers (rollers or gua sha tools) are frequently made of jade for this reason. It’s also said to benefit the liver, gallbladder, and urinary system.

As with other stones that come in a variety of colors, each color of jade has a specific energy and purpose:

Jade is regarded as a symbol of purity, love, and honesty. Some sources say that it also has the ability to amplify the power of a spell. For the most part, the magical and metaphysical uses of both nephrite and jadeite are dictated by their color.

Green jade is often employed for plant magic, prosperity, wealth, and healing. Placing four nephrite jades at the corners of one’s garden helps make plants lush and healthy. Wearing it is said to inspire love and devotion in others. This stone is also used when working with the heart chakra, Anahata.

Black jade is a protective stone. It guards against negativity, but can also be used in spells to help with stability, binding, and divination.

Blue jade is suitable for peace, harmony, healing, and all other things associated with blue in color magic. Placing a piece under your pillow can help you have memorable dreams. It’s used for the throat chakra, Visuddha.

Brown jade is used as a grounding stone, as well as in spells related to animals, stability, and the element of Earth.

Orange jade assists with joy, creativity, and success. Following the principles of color magic, it can also be used for luck in legal matters. Carry some on you in a pocket or pouch when you have to go to court to help win a jury or judge to your side. This stone is also used to balance and unblock the sacral chakra, Svadhisthana.

Red jade is for vitality, physical strength, ambition, lust, and all things related to the physical body. Wear or carry it when you need some extra energy when exercising, recovering from an illness, or engaging in a physical contest. It’s also used for the root chakra, Muladhara.

Violet jade can be any shade from lavender to deep purple. It’s used for meditation, divination, and strengthening psychic abilities. In some practices, it’s also associated with power — just think of the purple worn by royalty. It’s used for the crown chakra, Sahasrarah.

White jade is the most versatile color. Like clear quartz, it’s essentially “colorless” — meaning that you can use it for whatever purpose you need. It’s especially useful for cleansing and focusing. In some practices, it’s associated with prosperity, protection, sleep, and lunar magic. Like violet jade, this stone is also associated with the crown chakra.

Yellow jade is a stone of the mind. In color magic, yellow is tied to the intellect, learning, concentration, and mental (as opposed to spiritual) focus. Wear or carry it while studying, attending lessons, or taking tests. It’s also associated with the solar plexus chakra, Manipura.

Jade has a very long history with humanity, going back to the Neolithic era. The Balkans, Poland, Italy, Switzerland, and other areas of Europe have revealed Neolithic nephrite jade amulets and tools.

Similarly, prehistoric jewelry, burial objects, and utilitarian tools have been discovered in China. Jadeite axe heads and other tools have also been found across the British Isles and Japan.

While green jade is generally the most highly valued variety in the west, China has historically placed more value on white jade.

To the Maori, nephrite jade is known as a type of pounamu (greenstone). It plays a very important part in Maori culture, and objects made of it are passed down as valuable family heirlooms.

Guatemalan jadeite was used by the Mayan and Olmec peoples.

It’s said that a piece of nephrite, buried under a foundation, protects against earthquakes and flooding.

Jade is melodically resonant — it’s been used to make chimes, gongs, and xylophones!

Green jade is associated with the dead. Mourners in China during the Han dynasty would place jade pigs in the hands of the deceased. It was also believed that ingesting a mixture of jade powder and water prior to death would keep the body from decomposing.

In ancient China, adding jade to water was also thought to produce a panacea against all forms of illness.

Pre-contact Maori people used carved jade as nails, before they had access to metalworking technology.

How to Cleanse Jade

Since it’s actually two very different minerals, cleansing jade can seem a little confusing. Some guides recommend making elixirs by placing pieces of jade in water for several hours, or even overnight.

Others caution against anything more than a few minutes’ exposure to running water, as it can damage the stone. For this reason, it’s important to know whether you have a piece of nephrite or jadeite.

There are a few cleansing methods that can apply to either nephrite or jadeite, including:

Getting Started With Jade

Overall, jade is a lovely, abundant stone. If possible, you should attempt to find some from a source near where you live — it’ll be easier to ensure that it was ethically harvested and has a lower carbon footprint than a stone that was shipped a long distance.

You should also purchase your jade in person. This will let you get a sense of the stone’s energy before you take it home, but it also serves another important purpose: Since jade is valuable (especially jadeite), it’s often imitated. Choosing a stone in person means you can inspect it closely for signs of fakery.

Pick the stone up, and hold it up to the light. See if you can detect any minor flaws or irregularities in the internal structure. Even without magnification, you should be able to spot some. If not, you may be looking at chrysoprase. This is a microcrystalline mineral that’s often sold as jade.

Since it’s microcrystalline, however, it will have a more homogenous appearance than real jade does. If the stone appears to have layers, you may be looking at thin tiles of gem-quality jade glued over a base of a lower-quality stone.

Try holding the stone in your non-dominant hand. This will give you a sense of how the energy resonates with you. It should feel pleasant, and not provoke feelings of sadness or anxiety. If you’re very sensitive to crystal energy, you may notice a buzzing, pulsing, or tingling sensation in your palm.

While you do this, see how long it takes for the stone to begin to warm up in your palm. True jade should have a cool, almost soap-like feel in your hand, and take awhile to warm up.

Scratch tests may not be helpful for jade. For one, you won’t be able to perform one before purchasing a stone. (Most sellers would have words for you if you tried!) Secondly, jadeite is harder than nephrite, and both yield the same color on a scratch plate. Many other minerals sold as jade will have the same results.

Once you’re reasonably confident that you have a genuine piece of jade, and you’re comfortable with the stone you’ve purchased, take it home and give it a thorough energetic cleansing. This will remove the influence of all of the people who’ve handled your stone before you did.

Once your stone is cleansed, it’s ready for use. You can place it in your garden, use it as a healing tool, or save it for your magical needs. Jade is a wonderfully versatile gemstone to work with, so treasure it.

Humanity has relied on jade since before recorded history. While anthropologists aren’t sure if nephrite axes were utilitarian tools, ceremonial objects, or a form of currency, jade has been used for every conceivable purpose ever since mankind was able to work stone. Today, it still serves as a powerful symbol of growth, healing, and prestige.