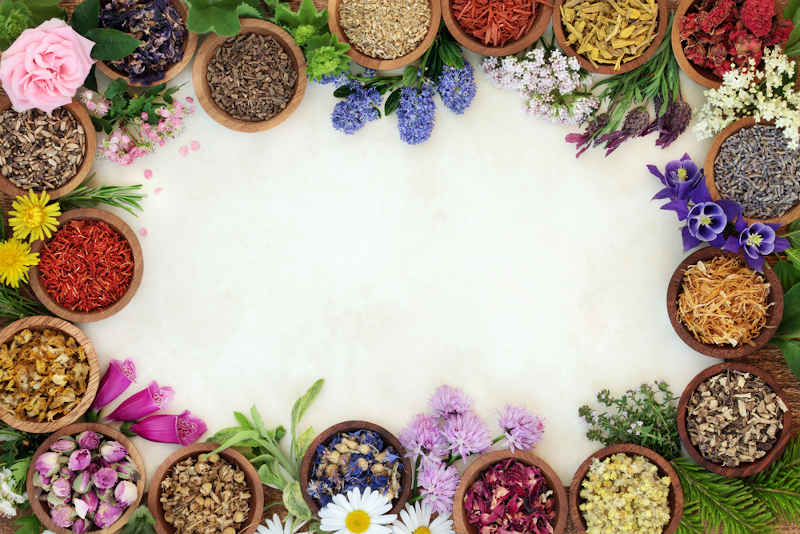 Have you ever had a really great opportunity come your way? It might hinge on outshining a handful of competitors, or making sure you put your best self forward. Sometimes, all you need is a little extra luck.

Some good fortune never hurt anyone, which is why magic has a strong tradition of good luck charms, talismans, and herbs.

If you’re putting together a sachet, herb jar, or spell candle, here are some luck-attracting herbs to consider:

On its own, alfalfa isn’t a very powerful herb. It’s primary virtue lies in its ability to work well in herbal blends, adding strength and support to the mixture.

It’s primarily used for luck in financial matters. While it isn’t really enough on its own, luck and money blends with alfalfa tend to work better than those without.

As a “sweet hot” herb, allspice is a catalyst for positive magic. This means that it helps spells work more quickly, without the banishing or repelling action of some other hot herbs.

It’s good at luck magic that requires a bit of divine inspiration — rather than handing you a windfall, it will make you stumble upon a brilliant idea instead.

Sometimes called bergamot, it should not be confused with the bergamot orange. Bee balm is also a useful luck herb that’s primarily used for financial help.

These familiar daisy-like flowers are an excellent luck herb, especially for gamblers. Before going out for a night of cards, gamblers in the Hoodoo tradition will make a chamomile infusion and use it to wash their hands in order to increase their winnings.

These buds of the clove tree are used to attract good luck and prosperity. As one of the “sweet hot” spices, they can also serve as a catalyst to speed up spells.

In some traditions, they are considered a compelling herb — useful when a situation requires you to assert your will and make your own luck.

Clover is such a well-known luck talisman, almost every child has spent a summer afternoon looking for four-leafed specimens in their yards.

They’re used to attract good luck and prosperity, repel evil when worn in the left shoe, and draw success when worn over the right breast.

Red clover, in particular, is helpful for attracting good luck in love. Clover is so famous for this, that nurseries often sell four-leafed lookalikes from the Oxalis genus. Despite their appearance, they aren’t the same. Don’t be fooled!

Fenugreek is a luck herb that’s primarily used for financial good fortune in the Hoodoo tradition. Adding some of the seeds to mop water attracts money to the household, but these seeds can also be used for all manner of luck and success work.

In Slavic lore, ferns produce a flower once a year. Whoever was able to find one would receive money, luck, and the ability to understand animals.

Unfortunately for fern flower-seekers, ferns don’t reproduce that way — they create spores, some as small as a speck of dust.

Some ferns do produce a “fertile frond,” however, which can resemble a flower. Ferns are also used for luck in money and to bring rain.

A very high-vibrational resin, frankincense has a reputation for removing negative energy and attracting the positive in its place.

While not explicitly a luck ingredient, frankincense tears or oil are an excellent generally positive base for creating luck formulas. Powerfully cleansing, effective, and great for attracting good things.

Heliotrope is used for happiness, joy, prosperity and protection. Gathering this plant in August is said to amplify its effects — if you use it for good purposes, you’ll receive extra benefits. If you use it for evil, it will return to you multiplied.

These sweet-smelling flowers are excellent at dispelling negative energy and replacing it with positive. A generally useful plant to have around for luck in all areas of life.

These seeds are carried as luck charms, and can be used in spells to grant wishes.

Juniper is a power herb, meaning that it adds extra strength to magical blends. Generally considered a cleansing herb, its ability to banish evil energies, attract love, and increase virility make it a useful addition to luck spells for these purposes.

An all-around herb that swaps the good for the bad. It attracts luck, and acts as a strength herb to add some extra power to herbal blends.

Lemon verbena is particularly useful in spells for luck in love. Often interpreted as the source of “vervain” in recipes for the Hoodoo staple Van Van oil.

The oak tree is a sacred tree with strong connections to all forms of positive magic. The acorns, in particular, are often treated as luck talismans.

Keeping them in a home is said to protect against misfortune (especially in the form of lightning strikes). Carrying them in your pocket while interviewing for a job or attending a business meeting is said to bring success.

Catching a falling oak leaf before it hits the ground brings luck in health matters.

This fragrant flower is less a straight-up good luck herb than a luck-reversing herb. If you’re experiencing a run of misfortune, rose geranium can help turn things around and convert your bad luck to good.

Rowan trees are used in magic for success, as well as protection, divination, healing, and spirit work. It seems to work primarily by repelling bad luck.

In the Scottish Highlands, the rowan was regarded as so sacred that it was taboo to use any part of the tree to create mundane objects — it was reserved for sacred tools alone.

These beans are often carried as luck talismans. They smell delightful, and make wonderful additions to pouches or sachets for good fortune.

Long regarded as a sacred herb in its native habitat, vervain is said to act as a protective herb when worn.

Interestingly, unlike many other protective herbs, vervain acts through luck — it can bring help to your side no matter how desperate the situation. This herb is also said to be what gives Van Van oil its name (though the “vervain” in those recipes is generally interpreted as lemon verbena).

Herbs for luck generally often aren’t very specific. There’s a lot of crossover between herbs for love, money, protection, and luck because, for most people, being “lucky” means succeeding in one of these areas.

You can use this to your advantage by combining herbs for luck with herbs for other purposes, and focusing all of their energies together toward your goal.

Whatever your intent, it’s always a good idea to have some luck herbs on hand to draw in a little extra good fortune and keep bad luck at bay.