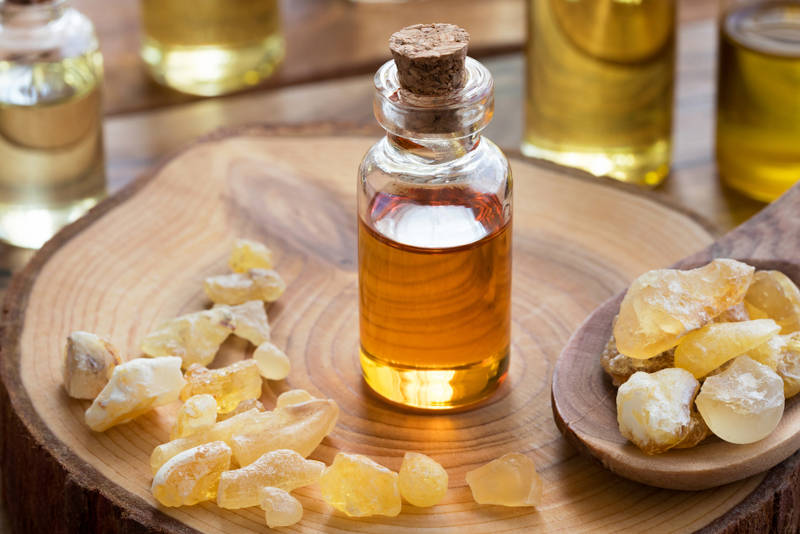 Frankincense (Boswellia species) is one of the best known sacred resins used in incense. The name “frankincense” even comes from a phrase meaning “choice incense,” indicating its value for fumigation.

Beyond its spiritual value, it’s also found plenty of use as a healing plant, treating conditions that range from mouth sores to asthma.

Frankincense is most often used in resin or oil form. It’s chief properties involve removing negative energy and increasing the spiritual vibrations of the space in which it is burned.

Because of this, it’s considered to enhance any ritual in which it’s included, and is sometimes treated as a power herb for increasing the potency of other magical mixtures.

In witchcraft, it’s often used during meditation, particularly any meditation intended to use or enhance psychic abilities.

Frankincense resin is often used as a base for blending magical incense. Its fragrance works well with other resins, herbs, and oils, and its empowering nature tends to give them an added boost.

In some traditions, frankincense’s positivity and vibration-boosting properties are used to attract prosperity. Carrying some of the resin in a wallet or purse is said to bring luck and draw money.

The oil is useful for anointing to cleanse, purify, bless, consecrate, and mark rites of passage.

Frankincense is ruled by the Sun and the elements of air and fire (though some consider it ruled by spirit).

Frankincense has numerous interesting medical and folk uses. Resin of the boswellia tree is a potent anti-inflammatory. Researchers think this may be because frankincense reduces the release of inflammatory compounds called leukotrines.

In some studies, the terpenes and boswellic acid in the plant were as effective as non-steroidal anti-inflammatory medication (like Aspirin and ibuprofen) at reducing inflammation. It’s often taken in supplement form to relieve pain and swelling from inflammatory conditions.

Frankincense’s anti-inflammatory action may also help improve gut health. In one study, taking the resin daily was as effective as a conventional treatment for ulcerative colitis.

Some studies have also indicated that it may help with Crohn’s disease and chronic diarrhea. More research is needed.

It may also be effective in reducing asthma symptoms. Traditional medicine has used it to treat lung conditions for ages, and research backs this up.

One study involving participants with asthma found that 70% of the subjects’ asthmatic symptoms improved with frankincense use. Frankincense is not a substitute for a rescue inhaler, but may be a helpful addition to a treatment program.

In addition to being anti-inflammatory, boswellic acid is also antibacterial, and may keep cancerous cells from spreading.

Other than that, frankincense has a long history of use without severe side effects. There’s not enough research to conclusively prove that it’s safe, and at what doses, but it doesn’t seem to have a lot of toxic potential.

In studies involving rodents, it took doses of two grams per kilogram of body weight (or about 136,000 milligrams for a 150 pound human) to be toxic.

People who are pregnant or nursing should avoid using frankincense, since it isn’t yet understood how it might affect developing fetuses or nursing infants.

Frankincense has been used and traded on the Arabian peninsula for over 6,000 years, sometimes trading as far as China.

It was introduced to Europe by the Franks and other groups on their way to the eastern reaches of the Roman Empire.

Getting Started With Frankincense

Because of frankincense’s popularity, several Boswellia species are threatened. Unfortunately, none of them are protected yet, though they meet the criteria for protection. If you plan to use frankincense, be sure to purchase it from a company that practices ethical harvesting.

Frankincense is taken from mature trees, and Boswellia species have a relatively narrow range in which they thrive.

For these reasons, it’s unlikely that any green witch (no matter how dedicated) will be able to grow and harvest their own resin. Fortunately, frankincense is available from most new age shops specializing in herbs and witchcraft supplies.

The best way to get started with frankincense is, as its name implies, as an incense. Since it’s a resin, it won’t be self-lighting. You’ll need a fireproof bowl, some sand, and a piece of incense charcoal.

Once the charcoal is lit and sufficiently hot, use a pair of tongs or a small spoon to place a few frankincense tears on the charcoal. It shouldn’t take long to begin producing copious amounts of fragrant smoke.

Use a hand fan, or your hands, to direct the smoke where you’d like it to go. It’s a fantastic incense for preparing ritual spaces, or just generally purifying and uplifting an area.

Since frankincense trees are suffering from habitat loss and overharvesting, you may wish to avoid using the resin in a way that consumes it.

In that case, you can look online for frankincense jewelry, or try making your own. You can purchase frankincense beads, or heat a needle in a candle’s flame and use it (carefully) to poke a hole through tears of the resin.

Once you’ve formed the hole, you can string the resin beads on a string or wire and wear them as ritual jewelry.

Nothing quite compares to the woody, spicy, vaguely citrusy scent of frankincense — it’s easy to see why it was called “choice incense!”

Even if you don’t habitually include it in your practice, everyone should be able to experience the scent and peaceful, clearing qualities of this resin at least once.