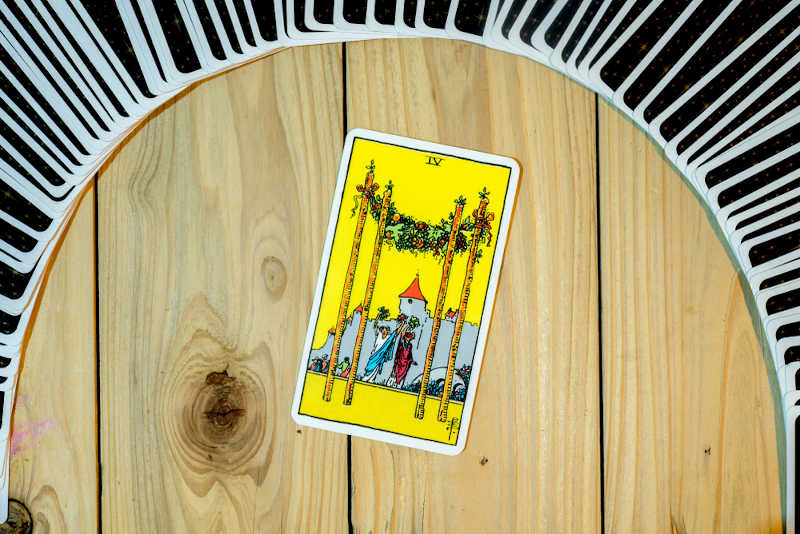 Four is the number of stasis. In the plot progression of the Minor Arcana, Aces start things off, Twos are where plans are born, Threes are where things get going, and Fours are a long buildup until the conflict and climax in Five.

In the Minor Arcana suits, Fours are waiting periods and markers of stability. In the Four of Wands, this is depicted as a celebration of hard work.

About Four of Wands

In the Rider-Waite-Smith tarot, the Four of Wands is depicted as a kind of harvest festival. In the foreground, four tall wands support a garland of fruit and flowers akin to a sukkah — a structure used during Sukkot, a week-long period of rejoicing in Judaism.

Behind this, two figures dance holding bouquets. There are more dancing figures beyond that, and, in the background, the viewer can see the walls and towers of a castle.

The four wands form the corners of the sukkah-like structure, creating an image of stability. All of them are straight, upright, and require no additional supports. This points to the harvest celebration as emblematic of tradition and the stability of a community.

In a general reading, the Four of Wands is similar to the Three of Cups, though the connotations are slightly different. This card represents weddings, celebrations, happy communities, and joyous family events.

The people in this card have set down roots, established a successful community, and are enjoying the fruits of their labor. When the Four of Wands appears, it indicates teamwork, coming together to celebrate, and successful group efforts.

When reversed, the Four of Wands signifies unhappiness within a group. There’s a rift in a community or family, and you may feel that you no longer fit into a place you once called home.

This card may also indicate failure brought about by instability, or the problems caused when people can’t work together as a group. A successful harvest requires the whole community to pull together. If that doesn’t happen, there’s no harvest festival.

In a love reading, the Four of Wands upright can represent a wedding, engagement party, or simply feeling welcomed by your partner’s family. It can be a very strong omen for weddings, in particular, though it can also represent other milestones.

In general, it represents setting the foundation for a stable, long-term relationship. There’s also a strong subtext of community love and approval — your love won’t just be celebrated between the two of you. Your family will become part of a larger, supportive community.

If you’re single, this card can represent parties, celebrations, and enjoying yourself. You may meet a new partner at a social engagement, especially within your community, or just have fun being unattached.

Even if you love your significant other, you may feel like an outsider. If you have a wedding scheduled, this may indicate a postponement or cancellation.

If you’re single, your social life might be hurting. You may also feel that you’re having a hard time finding a partner because you don’t seem to fit in anywhere.

It’s likely that this feeling is all in your head, but your sense of self-doubt may be sabotaging your ability to feel comfortable around others.

When it comes to careers and business, the Four of Wands is a sign of a happy work environment, enjoyable and successful teamwork, and the celebration of achievements. Things are harmonious and stable, and you and your co-workers are productive.

You might be experiencing a lot of work parties, award ceremonies, or teambuilding exercises. No matter whether you work for a company, or own your own business, this card means high morale and good relationships between co-workers.

If you’re in an ownership or managerial role, be sure to celebrate and incentivize this state of harmony and efficiency. Happy workers mean higher quality work!

Financially, this card signifies a good harvest. You’ve worked hard, and you’re now reaping the benefits. Just like the figures in the card enjoy their bounty of peaches grapes, and flowers, you’re enjoying a fatter bank account. You may wish to pay things forward by spending some money to enrich your family or community.

Co-workers may not get along, making group projects and teamwork nearly impossible. Things aren’t getting done, because personality clashes get in the way.

This card can also point to a significant event that changes relationships in your workplace. It may be that everyone got along, but something happened to change all of that. If this card seems to indicate a turning point, look to the other cards around it for more context.

Considering this card’s celebratory imagery, the key event may very well be a workplace party. Avoid overindulging in alcohol or acting unprofessionally. Having too much fun one day may lead to strained relationships the next.

In a money reading, this card shows that your financial state isn’t as good as it could be. It may be that your savings and investments aren’t well planned out, or that you’re spending too much to support your family.

Fixing things will call for some tough decisions, but this is necessary if you’re going to get control over your finances.

Four of Wands: Yes or No?

The Four of Wands indicates celebration and stability, so, in a “Yes or No” reading, it’s a “Yes!” This card is a pretty positive omen in general, which means that you’re most likely going to get the outcome you’re looking for.

If the Four of Wands is reversed, it’s still a “Yes.” It just isn’t likely to be quite as joyful and optimistic as it would be when upright. You might get the answer you want, but find that it’s not all that it’s cracked up to be. Since this card’s meaning relates to community, you may also get what you want only to find that it causes problems with those around you.

The Four of Wands is what happens when a community pulls together for the greater good. Upright, this card is a joyful omen that represents bounty, security, and shared prosperity. Reversed, it warns us against the pain and loss felt by everyone when we fail to work together.