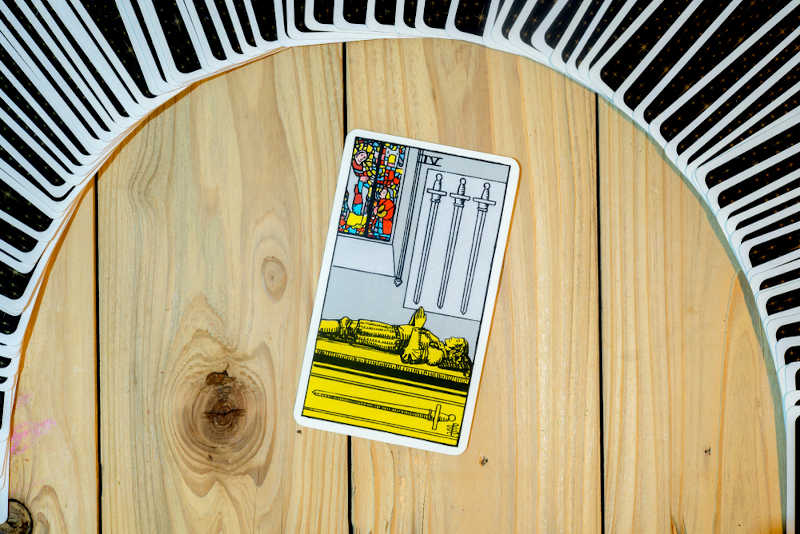 In numerology, four is stability. Picture four columns, supporting the roof of a temple. Imagine the four directions we use to orient everything. Four is reliability, dependability, and dedication.

In the Minor Arcana of the tarot, the same is true. Even if you’re using an old-style deck, or just a deck of regular playing cards, you can still interpret them based on where cards fall within their suit.

Three is when the action begins, and Four is where things remain in stasis before reaching the crisis point embodied by Five. The same is true for the suit of Swords.

About Four of Swords

In the Rider-Waite-Smith tarot, the Four of Swords is illustrated as a tomb. The imagery isn’t a portent of disaster or death, however — it’s a peaceful tomb in a church, beneath a colorful stained-glass window and three hanging swords. The fourth adorns the tomb itself.

The tomb is also decorated with a sculpture of a knight. His hands are together in prayer, and his face is calm. He’s sculpted as if he’s in repose, not dead.

In life, he was a warrior. (Even in death, he still has one sword by his side.) This suggests vigilance and a dedication to a purpose, even if he isn’t actively taking action right now. This card is also often interpreted as a period of enforced repose — possibly even exile.

The knight was a man of action. While his essence hasn’t changed, death has forced him to step back. It’s the ultimate pause, and the most complete rest possible. It also isn’t one he chose, which underlines the sense of exile or enforced rest.

It may show up during times of high stress and anxiety. As advice, it recommends that you take a step back and force yourself to disengage. This is just as much for you as it is for other people — you need a break in order to view your situation from fresh eyes and a different perspective. The rest indicated in the Four of Swords provides clarity.

In some readings, it may represent a literal tomb or coffin.

Reversed, the Four of Swords can indicate agitation. You may know you need to rest, but be unable to make yourself do so. This card serves as a warning: Take a break, before exhaustion makes you collapse.

It may also represent re-emerging after a period of repose. You’ve taken the time to calm yourself, heal, and obtain the mental clarity you need, and are now ready to reengage. Be sure you do so with caution, so you don’t end up back where you started.

The Four of Swords isn’t a very good sign for relationships. It generally turns up when there has been a lot of arguing and tension, as a sign that some space is needed. This can be a breakup, or simply some time apart. Separate vacations might be a good idea.

If you’re single, you may need to step away from the dating game for a little while. You might be exhausting yourself in your search for a partner, or have lost sight of what you really want. Take time to rest, introspect, and discover your needs.

In a relationship reading, the Four of Swords reversed can signify coming out of a period of stasis and reigniting your passions. It may also represent a period of heightened agitation that will force you and your partner to take a break from each other.

If you’re single, you may be ready to try dating again. Alternatively, this card can also be a warning that you’ve been pursuing a partner too relentlessly. In either case, prepare yourself for a shift. You’ll either dedicate your energy to dating again if you haven’t been, or be forced to rest for awhile.

When the Four of Swords shows up in a career and business reading, you may feel like you’ve been in a pressure cooker.

Chances are you’re dealing with looming deadlines, conflicts at work, demanding supervisors, broken supply chains, and all kinds of things that are causing you stress. It’s time to take a break, before you break. Whether it’s a week-long paid vacation, or a sick day for rest and self-care, do something for yourself.

In a financial reading, this card can symbolize a period of money anxiety. In all likelihood, the situation isn’t as dire as you’re imagining. Give yourself a break from worrying about your bank account. If you can’t, look to an expert for reassurance.

When reversed, the Four of Swords in a career or business reading can signify returning to work after a hiatus. Hopefully, you’ve been able to use this period for rest and reflection, and can bring this clarity and perspective to your job.

If you haven’t been on a break, then this card is warning you to take one. You might be pushing yourself to work past your limit, but that isn’t going to do anyone any good if you end up cracking under the stress. Rest, before you’re forced to.

Financially, the Four of Swords reversed represents a change in energy. If you’ve been struggling, things may be easing up. Conversely, you may start feeling overwhelmed. Accept the help that’s offered to you.

Four of Swords: Yes or No?

The Four of Swords is difficult to interpret in a “Yes or No” context. It represents a period of rest and healing after a difficult time, but this doesn’t necessarily make it a “Yes” card. On the other hand, it isn’t even a clear “No” or “Maybe,” either.

It might be better to interpret it as a suggestion not to focus on this question just yet. Allow yourself some rest and breathing room, and try revisiting it later.

Reversed, the Four of Swords paints a much clearer picture. In this case, it’s a “No.” It’s anxiety, lack of rest, and an inability to relax. You might be fretting over the answer to this question, but your hunger for answers is only sabotaging you.

The Four of Swords is a complex card. It represents rest, though whether that’s needed rest or rest that’s already been taken is up to the querent. In any situation, upright or reversed, it highlights the value of temporarily disengaging from stressful situations to obtain mental clarity.