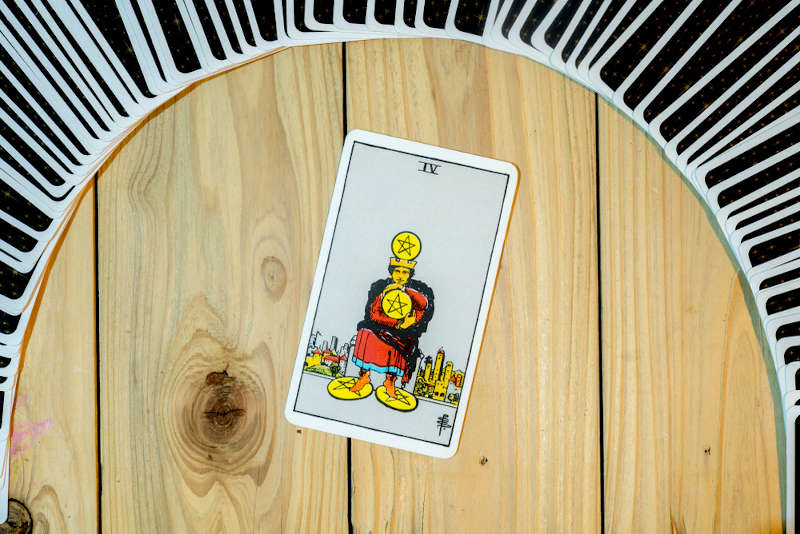 The suit of Pentacles is all about material wealth, putting down roots, and other things ruled by the element of Earth. If you follow the meanings of the Minor Arcana cards, you can see a definite progression in each suit. Each one tells a story, starting with a new beginning embodied by the Aces, to the climactic tension in the Fives, and ending with the culmination in the Tens.

In this progression, Fours are cards that represent the calm period before the climax. They are stasis, rest, or some kind of pause.

For the Four of Pentacles, this means sitting on a pile of material wealth, and refusing to share.

About Four of Pentacles

In the Rider-Waite-Smith tarot, the Four of Pentacles is represented by a well-dressed man on a throne. He wears shades of red and blue, and has a gold crown on his head, indicating that he may even be a king.

His expression is neutral — neither pleased nor displeased, though there’s a hint of smug satisfaction in his face. He has four golden pentacles around him. One is resting on his crown, one is beneath each foot, and the fourth is held in his arms.

In the background, a city stretches as far as the eye can see. This is significant — this man’s crown indicates a position of authority. His attention should be on his people, but it isn’t.

His throne is very pointedly turned away from the city. He’s not inside of a castle, or you wouldn’t be able to see the city behind him. Wherever he is, he has chosen to orient himself facing away from his people, and is deliberately focusing his attention elsewhere.

Where is his attention focused? The only other objects in the illustration are the pentacles. He seems to be jealously guarding them, too. They aren’t simply placed around his throne, he’s literally holding them all in place.

While his expression seems satisfied by this, he also doesn’t look happy. He’s clinging to his material wealth, ignoring what’s actually important, and it isn’t even bringing him joy. He also doesn’t seem to realize that he’s trapped himself. By using his head, arms, and legs to keep hold of his treasure, he can’t move without releasing something.

In a general reading, the Four of Pentacles indicates holding on to something too tightly. This might not necessarily be money or material goods (though it often is).

You might be clinging to things that give you a sense of security, without being aware that this security is also trapping you in your present circumstances. You can’t always exert control over everything in life. It’s time to consider loosening your grip.

When reversed, the Four of Pentacles can represent a willingness to let go. This might be uncomfortable at first, but will also ultimately be freeing. You have stopped trying to control every facet of your life, and understand that letting things go creates room for new growth.

In some contexts, it may also represent being too free with what you choose to keep in your life. There are some things that are worth holding onto. It can also be an indication of reckless behavior, or someone who may be an easy victim for scammers.

In a relationship context, the Four of Pentacles can signify that someone is trying to hold on to someone too tightly. The idea that, “if you love something, let it go” applies here. Either you or your partner may be veering into possessiveness and jealousy.

Alternatively, this relationship may have run its course, but someone is unwilling to see this. As a result, they cling tightly to their partner instead of acknowledging that it’s time to move on.

If you’re single, this card can symbolize a fear of change. You might be holding on to old loves, mental states, grudges, or emotional wounds out of a desire to protect yourself. It may be that, even if these things are unpleasant, they’re familiar enough to be comforting to you. It’s time to let go and release yourself from this self-imposed emotional prison.

For love and relationship readings, the Four of Pentacles reversed can be a very positive thing. It’s a sign of lightening up and learning to let go. Rather than one partner trying to keep the other on a leash, there’s more trust and freedom here, which ultimately makes for a healthier relationship.

For single people, the Four of Pentacles reversed indicates the release of fear, grudges, obsessions, and other negative emotional states that keep people locked in place. In letting these go, you’re making room for new love and joy in your life.

The Four of Pentacles is a mixed blessing in career and business spreads. On one hand, it represents achievement — after all, you wouldn’t be trying to hold on to something that wasn’t already yours.

It also represents security. Problems arise when achievement and security turn into fear. You might have leads, connections, or resources that you avoid sharing with others, lest their stars eventually outshine yours. This will have the opposite effect that you intend. Rather than protecting your own career, you’re sabotaging your progress. Remember, a rising tide lifts all boats!

In a financial context, the Four of Pentacles couldn’t be more literal. Jealousy or fear of poverty have you holding on to your coins for dear life. While this means that you’re in a stable, secure position right now, it’s also inhibiting further growth. Strike a balance.

When the Four of Pentacles appears reversed in a career and business context, it can indicate losses or a lack of security. It’s not a good time to gamble on high-risk projects, even if they may have high rewards. If you’re a small business owner, be on the lookout for people attempting to take advantage of you.

In a financial reading, the Four of Pentacles reversed can indicate spending money too freely. You might be living paycheck-to-paycheck, spending money as soon as you have it.

You may also have lost money in high-risk investments or “get rich quick” schemes. It’s time to set goals and plan for the future, so you have something to show for your hard work.

Four of Pentacles: Yes or No?

As a “Yes or No” card, the Four of Pentacles is usually a “Yes.” You’re likely to receive the outcome you’re hoping for, but this may be because you’re maintaining very strict control over the situation and grasping tightly to what you want. While this can get you the answer you’d like in the short-term, it may not be a sustainable solution.

Reversed, it becomes a “No” or “Maybe.” This card indicates that you’re willing to let things go, which may include your desired outcome. Take heart, however, as not every “No” is a bad thing.

The Four of Pentacles doesn’t have a lot of the occult symbolism of some of the other cards, but its illustration perfectly demonstrates its meaning.

Upright, it stands for clinging too tightly to the wrong things, to the point that we lose sight of what’s truly important and what will actually bring us joy. Reversed, it turns sharply into letting go too easily.

When this card appears, it’s time to ask yourself if you’ve been making room for growth, joy, and blessings in your life, or losing them as soon as they appear.